Leonard Cohen to be revered at Montreal's Museum of Contemporary Art

The late legendary Montreal musician Leonard Cohen will provide inspiration for more than a dozen visual artists and musicians as part of a special exhibition by Montreal's Museum of Contemporary Art and CBC/Radio-Canada for the city's 375th anniversary celebrations.

He was both "profoundly Montreal" and "totally planetary" and now the late, great Leonard Cohen's work will serve as inspiration for Montrealers and visiting artists as part of a special exhibition.

It's organized by Montreal's Museum of Contemporary Art (MAC) for the city's 375th anniversary celebrations.

"What we want is to...celebrate the incredible musical and philosophical achievements of this great Montrealer," said John Zeppetelli, chief curator and director of the MAC.

The legendary singer-songwriter, poet and artist died in November at the age of 82, just one week after the release of his new album You Want It Darker.

The exhibition, Leonard Cohen – A Crack in Everything, will debut in November 2017 and will feature commissioned work by filmmakers, visual artists and musicians including Quebec stars Ariane Moffatt, Jean Leloup and French singer Lou Doillon.

The artworks will stretch across disciplines, and include visual and performance-based pieces, as well as music and writing.

All of the work is being commissioned, with support from Montreal's 375th anniversary celebrations.

CBC/Radio-Canada is also co-creating several original productions for the exhibition and broadcasting some special events and concerts.

The public broadcaster will also open up its archives for artists to use its footage of Cohen, in concert and in interviews.

"Cohen [was] unrelentingly interesting in interviews. He never seemed to say anything banal," said Zeppetelli.

He said one filmmaker will be cutting together Cohen's concert footage to create a "large immersed environment" in one of the museum's gallery spaces.

The exhibition will lead off with American artist Jenny Holzer, who will create a series of large-scale projections of Cohen's lyrics and poetry.

They will be screened at sundown on Silo #5 in Montreal's Old Port for five nights starting on Nov. 7, the one-year anniversary of Cohen's death.

It's a project that has been in the works for more than a year and a half, but came too late for Cohen to witness himself.

While Cohen was aware of the exhibition, he wasn't working on it himself, according to Zeppetelli.

"Leonard, I think, philosophically, would not have wanted to participate in what he perceived to be ultimately a self-glorification," said Zeppetelli.

But the curator added that while all of the participating artists "revere" Cohen, the exhibition won't be a simple homage.

The artists will use Cohen's work to explore themes ranging from depression to post-Holocaust Jewish identity.

"It will be different opportunities to reflect on different things through this marvellous figure," he said. 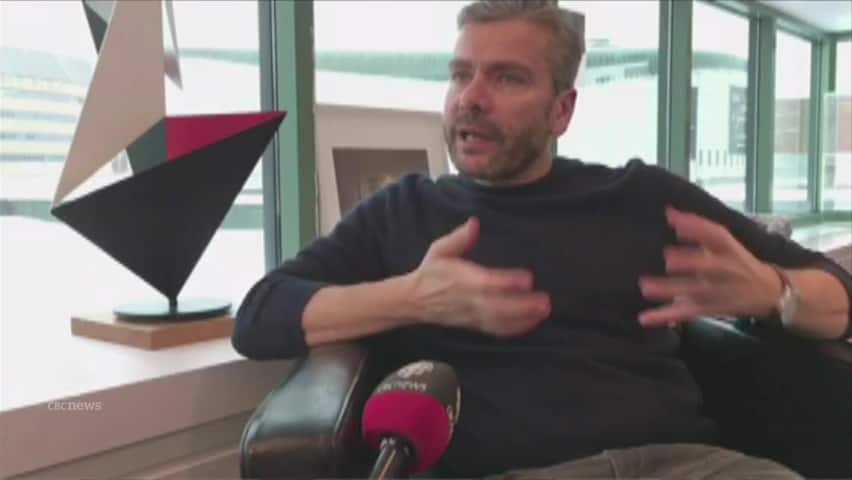 4 years ago
0:58
MAC's chief curator John Zappetelli says Cohen was aware of the exhibit before he died last November 0:58

The Cohen exhibition comes as the museum is busy preparing for a long-awaited expansion worth $44.5 million, which will finally begin in January 2019, according to Zeppetelli.

The museum has secured $18.5 million dollars each from the provincial and federal governments to nearly double its exhibition space, with the rest of the financing to come through private donations.

The construction will force the partial closure of the museum for two years, with plans to re-open in 2021, with a new restaurant, new facade and a greater presence on Ste-Catherine Street.

"We won't be completely off the radar," said Zeppetelli, who adds that some of the MAC's galleries should be able to remain open during the closure.

The museum also plans to collaborate on projects in other spaces during the renovations.