Nearly a year after a fire killed 32 people living in a L’Isle-Verte, Que., retirement home, the search for answers begins. 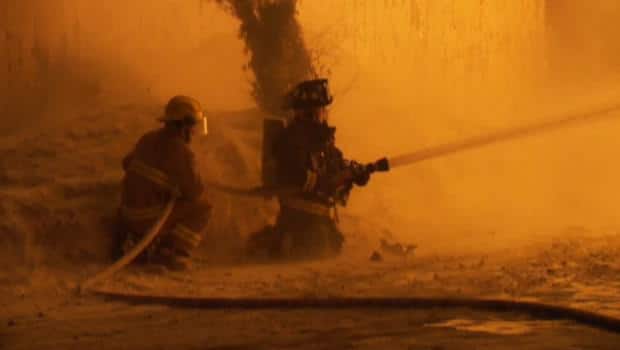 6 years ago
2:34
What went wrong in Quebec last winter to cause one of the deadliest seniors' home fires in Canada? 2:34

The coroner’s inquest looking into the fatal fire at the seniors’ residence in L’Isle-Verte, Que. got off to an emotional start today.

Monday's inquest began with a screening of a promotional video for the senior's home, Résidence du Havre.

The video showed better times, including images of the some of the now-deceased residents enjoying Christmas dinners and summer picnics.

The inquest counsel wanted to show the building before it burned, and also pay tribute to those who died.

The first witness at the inquest was the Quebec provincial police officer in charge of the residence site after the fire.

Sûreté du Québec Lt. André Duchesne described the challenges investigators had to work through when they arrived at the scene.

He said the freezing temperatures made it difficult to recover bodies and investigate the cause of the fire.

According to Duchesne, more than 30 centimetres of ice accumulated on the structure after firefighters sprayed down the building to put out the flames.

He also pointed out that the short winter days and limited sunlight made it difficult to carry out the work.

No sprinklers installed in older section

An older wing of the Résidence de Havre caught fire around midnight on Jan. 23, 2014 and was consumed quickly.

It took weeks for their identities of those who died to be confirmed because many of the victims were so badly burned.

After the fire, it was discovered there were no sprinklers installed in the older section of the residence, which was built in 1997.

A newer wing, built in 2002, did have automatic sprinklers.

The fire prompted serious questions about whether the province’s sprinkler and fire regulations go far enough.

Coroner Cyrille Delâge expressed some frustration as Lise Veilleux, a spokeswoman for the Quebec agency that oversees building codes, spoke about the various regulations in place in the province.

"Does anyone understand these except you?" Delage asked at one point. "How can you expect us to know what's going on?"

He said that seniors’ homes need enough staff, and there was only one night guard on duty at Résidence du Havre the night of the fire.

The inquest also called into question whether regional fire departments are equipped to handle a fire of that magnitude.

It took nearly 20 minutes for the first fire truck to arrive at the L’Isle Verte retirement home and for the fire chief to call in reinforcements.

Delâge said his goal is not to assign criminal blame. Police last week sent their report to the Crown prosecutors' office, which will decide whether to lay charges.

“Before drawing any conclusions, we should wait for what the experts are going to say,” said   L'Isle-Verte Mayor Ursule Thériault.

The inquest, scheduled to wrap up on Nov. 26, will hear from 56 people, including key witnesses like the fire chief and the night guard.

Delâge is expected to make a series of recommendations to the province about how to prevent similar tragedies  from happening in the future.