A dozen killer whales are trapped about 30 kilometres off the coast of Inukjuak, Que., and the federal government is expected to send a team of experts to help save them. 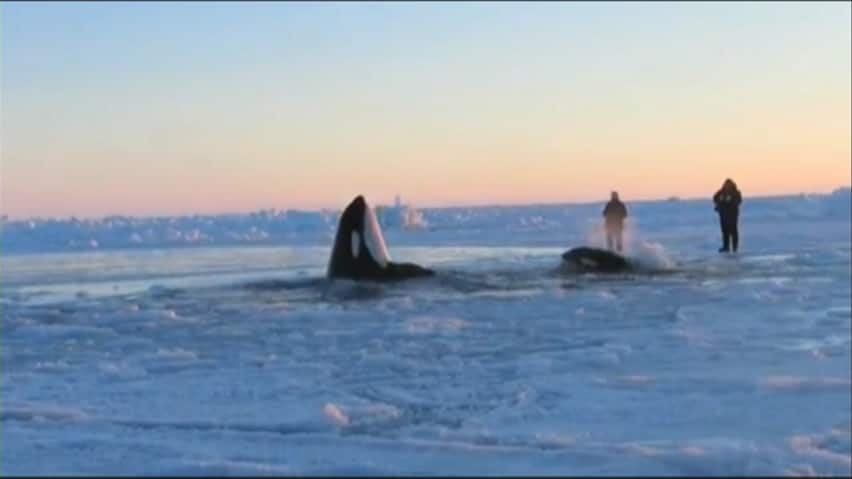 A dozen killer whales trapped in the ice about 30 kilometres off the coast of Inukjuak, Que., could be in imminent danger, as a local Inuk who visited them late Wednesday afternoon said the small patch of open water which the whales are sharing is already shrinking.

Twelve orcas were spotted at the breathing hole at the eastern top of Hudson Bay by an Inukjuak hunter Tuesday. The federal government is sending a team of experts tomorrow to evaluate whether they can be saved.

Tommy Palliser, who travelled from Inukjuak to visit the whales late Wednesday, said he observed that the hole is already markedly smaller, and he's concerned the wind appeared to be pushing the ice closer to the shore.

Earlier Wednesday, Peter Inukpuk, mayor of the small Inuit village, called on the Department of Fisheries and Oceans (DFO)  to send out an icebreaker to help the whales.

People in Tuktoyaktuk, N.W.T., know well the desperation of having whales trapped in ice. In 2006 and 2007, dozens of belugas drowned after becoming stranded behind a wall of ice in the Husky Lakes area.

To try to solve the problem, the Department of Fisheries and Oceans started using technology to prevent whales from entering the lakes. They put 12 high-pitch battery-operated noise makers under water at the mouth of the lakes to keep the whales away.

Five years later, the method seems to be working.

"It's only been two days that the bay froze up," Inukpuk said. "It's not thick, thick as in previous years. I am sure an icebreaker could come up and open a route for them."

"We are not equipped to give assistance to those killer whales," said the mayor. "We would need outside help to get them to safety."

He conjectured that the pod, consisting of two adults and a number of younger whales, could be a single family. He said it's clear that the whales are in trouble.

"It appears from time to time that they panic," said Inukpuk. "Other times they are gone for a long time, probably looking for another open space, which they are not able to find."

Martha Asudluak, 21, hitched a ride on a snowmobile Wednesday morning to go out to see them.

"I saw the big head popping out of the waters ... I couldn't believe what I was seeing," she said, adding she got to about three metres away from the water's edge.

"They kind of looked like they needed help," she said. "They're sharing this small little hole. They were probably searching for a way to go out, but at the moment they have no other choice but to stay there because it's all ice —  all over."

Asudluak says she feels blessed to have been able to see the whales, but she also wants them to be freed as soon as possible.

A spokeswoman for the DFO, Nathalie Letendre, said it's not unusual for marine mammals to become trapped in ice.

"With the social media, it's just another tool to be aware of what happens in the northern part of Quebec," said Letendre.

"Ice entrapment is the main cause of mortality in many species," Ramp said.

He said what makes this case unique is that it could be the first sighting of killer whales in the Canadian Arctic in January.

Unlike narwhals, belugas and bowheads, orcas are not an ice-loving species, Ramp said, following their prey north during the summer months but retreating before the ice moves in.

He said with climate change, it appears the animals are straying further and further north — and perhaps, staying too long.

"It seems the ice dynamics are changing very quickly," said Ramp. "Suddenly a huge expanse of open water is clogged up, and they miss the chance to get to open water.

"The risk is that the hole freezes up, and they basically just drown."

Ramp said from what he has observed on a video posted to YouTube, it does appear the whales are agitated.

"They seem to breathe very frequently —  a sign they're under stress," he said. "They're definitely not chill."

Icebreakers expensive and far away

The DFO's Letendre said her department's team of experts is evaluating the situation, looking at the number and health of the whales, the state of the ice and the proximity of the whales to open water.

The team is expected to arrive in Inukjuak tomorrow, and Letendre said the experts will consult with the community before any course of action is undertaken.

Sending in icebreakers might be one option, Letendre said, but it's an expensive one that could prove logistically difficult.

"Presently, the icebreakers are really busy with the ice conditions that we have in other regions of our country," Letendre said. "In the Quebec region, the icebreakers are working on the Saint Lawrence River. Just this week, three commercial ships were stuck in the ice in the Matane area."

Sending in icebreakers would likely take a political decision, Ramp suggested, and in any case, they might arrive too late.

He said in a previous similar circumstance in the Japanese Arctic in 2005, the whales died within one day of their discovery, after their ice hole froze over.

"It's heartbreaking to witness these pictures," Ramp said, "but it's probably occurring more often than we think."