CBC’s arts and culture contributor Nantali Indongo got to talk to some of the hottest names in comedy at the 2019 Just For Laughs red carpet event. Conversations ranged from diversity to creativity and, of course, what they like and what they hate about Montreal.

CBC's arts and culture contributor Nantali Indongo got to talk to some of the hottest names in comedy at the 2019 Just For Laughs red carpet event.

Conversations ranged from diversity to creativity and, of course, what they like and what they hate about Montreal.

'Canada, we got a very special present for you': Hasan Minhaj

Hasan Minhaj, who first came to the comedy world's attention as the senior correspondent on The Daily Show, told CBC that Canadians may expect to see something about themselves in the next season of his Netflix show Patriot Act with Hasan Minhaj.

"Canada, we got a very special present for you guys," said Minhaj. "I can't say what, but I think you guys are really gonna like some of the stuff we are talking about."

"Civil liberties that give people equality in the expression of their faith is something that we should fight for in democracies," said Minhaj, whose family has Indian Muslim roots.

"We gotta be consistent with the symbols," joked Minhaj. "We are talking about no costumes: a complete Halloween ban, a jersey ban. We can have no logos."

The comedian received the Breakthrough Comedy Star of the Year Award at the JFL awards show Friday afternoon, given to him by his fellow Daily Show correspondent Ronny Chieng, star of the CBC show Ronny Chieng: International Student.

"It's great to give awards to fellow colleagues who are the same age as me and have been in the business the same amount of time and have somehow managed to achieve much more success and fame," Chieng joked with CBC's Indongo.

Big Mouth writers on what makes their show special

The raunchy comedy about a group of middle school students going through puberty has been extremely well received by audiences and critics alike.

When asked about what makes the show so successful, the writers agreed that it all comes down to human connection.

"Puberty is highly emotional. The stakes feel really high," said Kroll, whose personal experiences are woven into the show.

"It's the most potent time of your life," said Flackett. "Those are the memories that you have."

The show was recently nominated for an Emmy for Outstanding Animated Program and has been renewed by Netflix for three more seasons.

Amanda Seales took the Rising Comedy Star Award. She has been in the entertainment industry for decades, but she just started doing stand-up comedy five years ago.

"It's a testament to my dedication to the craft," said Seales. "I came over to comedy because I felt like it was a craft that I needed to perfect."

Although the industry is increasingly diverse, Seales said there is much more to be done.

"I looked at the cover of the art work, and there was only one black woman," said Seales.

Kevin Hart, who received the Generation Award, was also on the red carpet. He has been in Montreal the last couple of weeks filming his new movie Fatherhood.

Last week, it was reported that he and his children bought ice cream to summer campers in Pointe-Claire.

"I just want my kids to be productive," said Hart about that experience.

"There are so [many] amazing things about Montreal," said Hart. As to what's best, he said, "the people."

He did not stop there, however, letting us know his least favourite thing about Montreal is, you guessed it: the construction.

Watch below for more of the highlights. 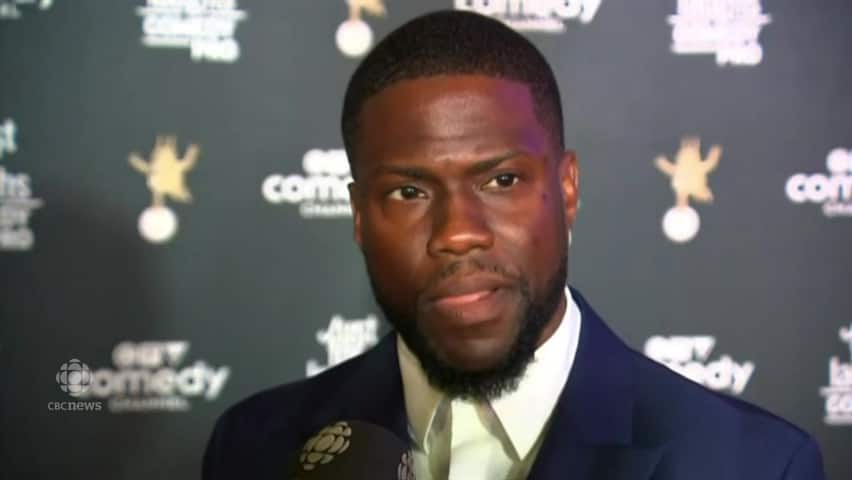 On the Just for Laughs red carpet