In heartfelt video, Joyce Echaquan's husband thanks those who have supported his family

Carol Dubé, the husband of Joyce Echaquan, who died last week in a Joliette, Que., hospital, says he's touched by the amount of support his family has received. 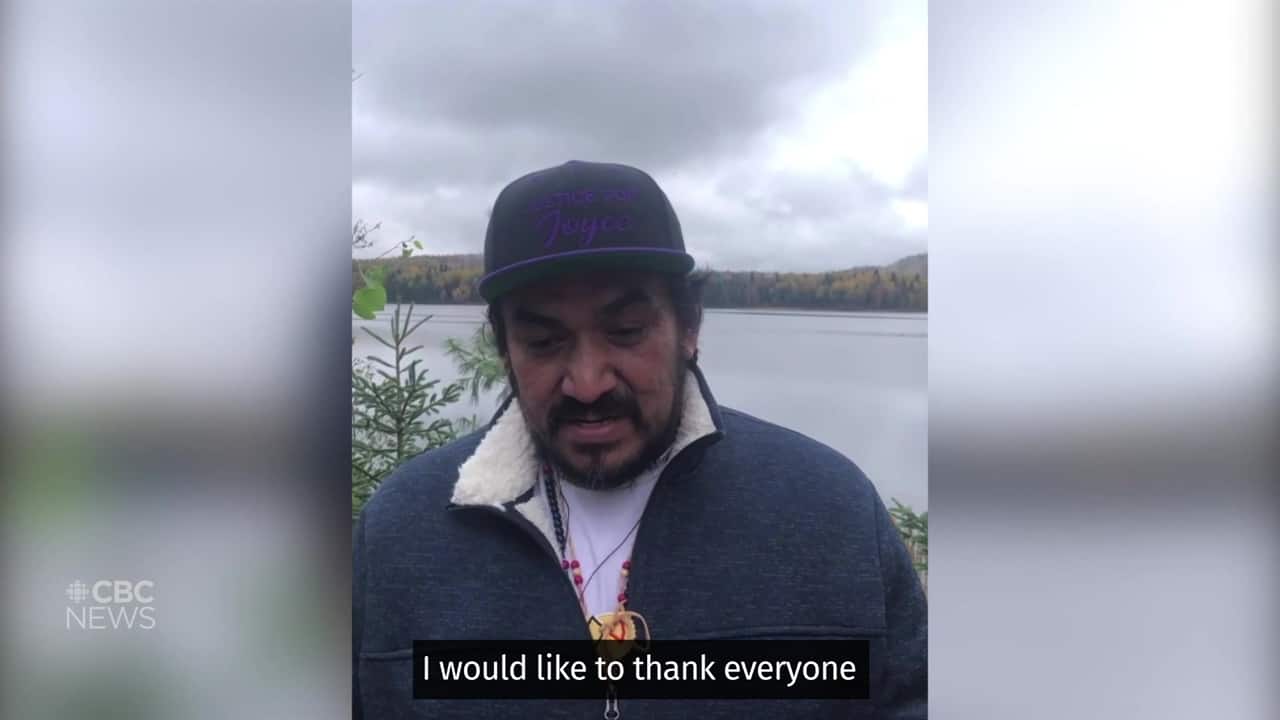 13 days ago
1:38
Joyce Echaquan's husband says the support from strangers has meant the world to him and their children. 1:38

Joyce Echaquan's husband hasn't been spending much time on social media, but he's beginning to see that the story of her death has shaken the country and the world.

Carol Dubé says he's touched by the amount of support his family has received following her death.

"From myself and my seven children, I would like to thank everyone for their prayers and sympathies and everything that has been done for my family and my wife," Dubé said in a video posted on a crowdfunding page for the family.

"I am shocked that there are so many people."

Echaquan, a 37-year-old from Manawan, Que., an Atikamekw community 250 kilometres north of Montreal died in a Joliette, Que., hospital last week. Before she died, Echaquan posted a video of hospital staff insulting her live on Facebook.

A nurse and an orderly at the hospital have since been fired.

Echaquan's video was spread widely on social media, garnering support for her family and outrage at the way she was treated in the moments before her death.

A crowdfunding campaign launched after Echaquan's death had raised more than $293,000 by Thursday at 1 p.m.

In the video, Dubé expressed his deep thanks to everyone around the world who have sent messages of support and donated to his family.

"It's sad that it had to happen like this, but I know there is good on this planet," Dubé said. "You have a very big heart and I will prove to you that I also have a big heart. Thank you, everyone. We are all sisters and brothers."

Echaquan's death will be the subject of an inquest by the Quebec coroner, with hearings expected to begin in 2021.

Dubé and other members of Echaquan's family and community visited Ottawa on Saturday to meet with Minister of Indigenous Services Marc Miller and Minister of Crown-Indigenous Relations Carolyn Bennett.

Community members — and one of Echaquan's sons — got down on one knee to plead with the federal officials to do something about systemic racism.

"Carolyn and I should have gotten down on one knee and begged them for forgiveness for a system that failed them," Miller said Thursday.

He said the provincial and federal governments have a shared responsibility to improve the treatment of Indigenous people, and he plans to hold a high-level meeting of federal ministers and Indigenous leaders to address racism in the health system following Echaquan's death.

But, Miller said, the deep pain the Atikamekw people, people of Manawan and Echaquan's family feel is a result of the "refusal to acknowledge systemic racism" by provincial officials.

Quebec Premier François Legault has repeatedly refused to acknowledge the existence of systemic racism in the province.

"It's deeply wounding for them," Miller said.