Quebec man, 43, demands to be rescued from the 'prison' that is a CHSLD

Until he’s able to meet with the premier to discuss ways of allowing people to live at home instead of in CHSLDs, Jonathan Marchand has fenced himself into a makeshift cage outside the National Assembly. 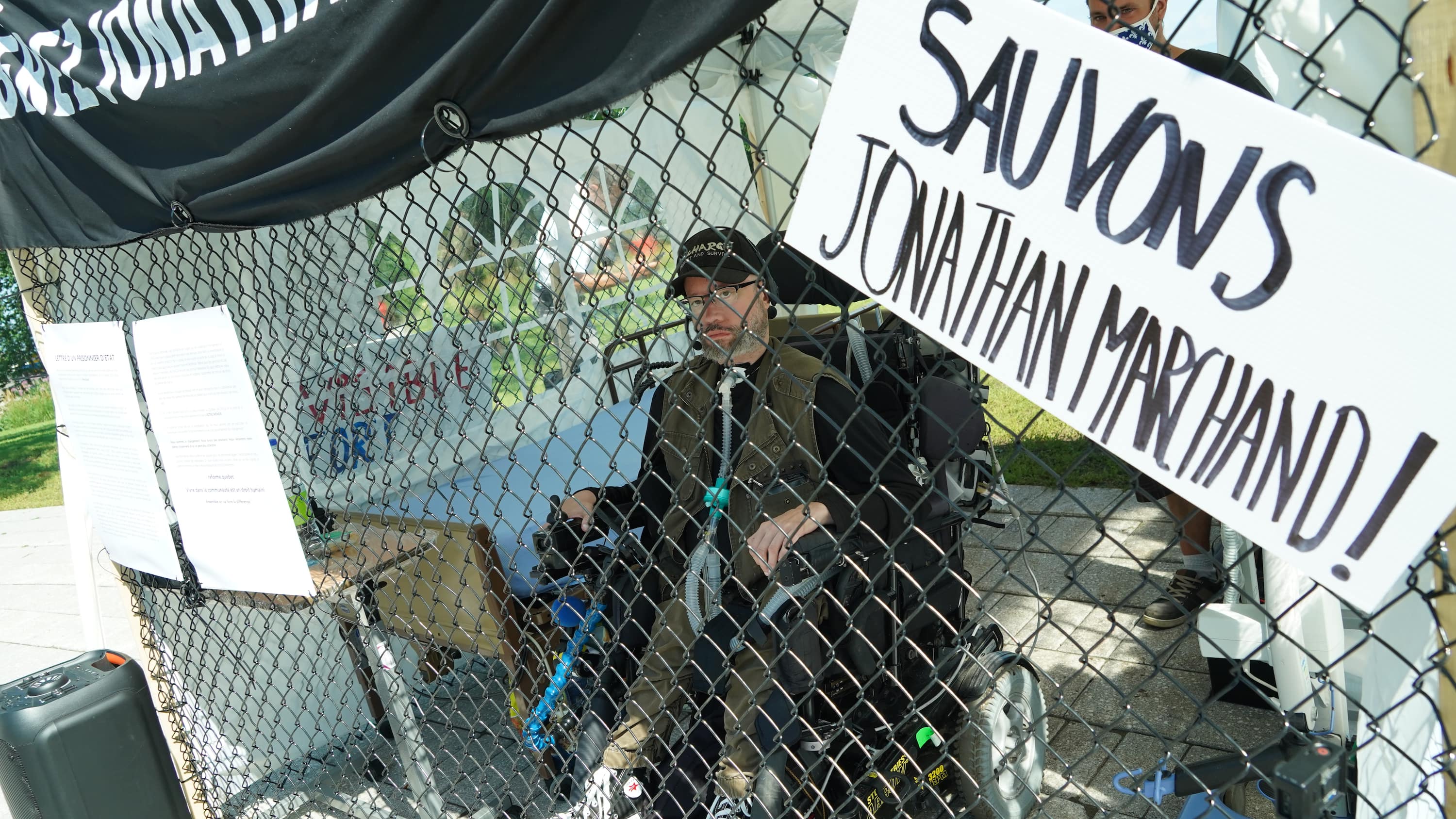 Jonathan Marchand camps out in front of National Assembly

4 months agoVideo
1:51
He's advocating for the government to invest in home care for people with disabilities. 1:51

All Jonathan Marchand wants is to live at home — and to that end, he's demanding a meeting with Premier François Legault.

Marchand, 43, has lived in a long-term care home in Sainte-Anne-de-Beaupré since 2012, a place he likens to a prison, and says doesn't "feel safe" during a global pandemic.

He has muscular dystrophy and uses a wheelchair. He also needs round-the-clock help to monitor the ventilator he uses to breathe.

Until he's able to meet with the premier to discuss ways of allowing people to live at home instead of in CHSLDs, Marchand says he will stay in a makeshift cage outside the National Assembly.

"I have met with ministers, senior officials and deputy ministers with little result," wrote Marchand in a statement. "Our freedom cannot wait any longer."

He said he's willing to stay put "as long it takes."

"Days, week, whatever it takes," he told CBC's Breakaway.

At least half a dozen other people, also in wheelchairs, showed up Wednesday to show their support.

Marchand's setup includes a hospital bed and all the medical equipment he needs to survive.

He said living in a CHSLD during COVID-19 poses as great a risk to his health as "escaping" the home to protest in Old Quebec.

Marchand has a list of demands he hopes to discuss with the premier, including a project to investigate how people with disabilities can leave or avoid long-term care facilities.

People with disabilities who are not seniors should be given the choice of how they want to live, instead of being forced into a facility, Marchand said.

"For us, it's not just about being kept alive. We want the tools to be included in society," he said. "For that, personal assistance is essential, as it exists elsewhere in Canada and around the world".

Marchand said he's tried in vain for years to convince the province to hire a caregiver for him, which he said would be more affordable than a room in a CHSLD.

"It's cheaper and respects our rights and freedoms," he stated.

He said he does not have an illness, he has a disability, and should not be treated "like an object, warehoused into a building," being told when to wake up, eat, go to the bathroom, and go to sleep.

Marchand has been vocal about his desire to leave his CHSLD since April, telling Quebec AM the pandemic highlighted the shortcomings in the province's long-term care homes.

Marguerite Blais, the minister responsible for seniors and informal caregivers, visited Marchand Wednesday in front of the legislature.

"I know Mr. Marchand. He came to see me when I started my mandate," Blais said. "I would like for him to be home in the next two years, if not before. That needs to happen."

She said the government is investing in home care services.

But Marchand said Blais's plan maintains the current system of centralizing health care decisions, instead of empowering individuals to decide what kind of help they need.

He is adamant only a visit with the premier will do and he plans to stay put until that happens.

"I'm not just doing this for myself, my goal is to open the cage door by creating a precedent," he stated. "Everyone is worth it and we must leave no one behind."

Marchand said he "cannot go home empty-handed," because he fears he will face repercussions from his long-term care facility for his stunt at the National Assembly.

Legault spokesperson Nadia Talbot told Radio-Canada the premier's office is aware of Marchand's situation, but that a meeting is not possible at this time.

With files from Julia Page and Radio-Canada