The 39th mayor of Montreal has lost his fight with pancreatic cancer.

The 39th mayor of Montreal has lost his fight with pancreatic cancer.

The born and bred Montrealer served two terms as the city's mayor.

"He changed completely the way Montreal was managed," the former leader of the Bloc Québécois, Gilles Duceppe, said at a tribute to Doré held last winter.

Doré studied law at the University of Montreal. He was elected president of the university's general students' association in 1967 and passed the bar not long after.

In 1974, he became one of the founding members of the Montreal Citizens' Movement (MCM) municipal party and was elected party president in 1982.

In the 1980s, Doré and the MCM symbolized a renewal in municipal politics, eventually ending the 26-year, controversial reign of Jean Drapeau's Civic Party. 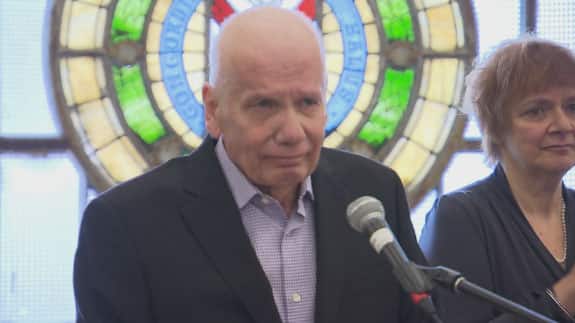 After Drapeau's resignation in 1986,  the MCM won a landslide victory, taking 55 of the 58 council seats. Doré was elected mayor with 68 per cent of the vote.

City Councillor Marvin Rotrand said the Doré years were best known for the creation of a more openly democratic style of governing.

"We went from the 1950s to the 1980s overnight in Montreal," said Rotrand earlier this year.

Under Doré's administration, 150 kilometres of bike paths were built in the city, as were numerous parks and public beaches – including the one on Île-Notre-Dame that now bears Doré's name.

He was at the city's helm when a gunman opened fire at the École Polytechnique on Dec. 6, 1989, killing 14 women.

Doré, who knew one of the victims personally, called the event one of the "blackest days" in the city's history.

In 1990, Doré was re-elected mayor.  That same year, he welcomed to Montreal Nelson Mandela, who had just been released from a South African prison.

"It was one of the greatest moments in my political life," Doré said of the Mandela visit.

Doré was defeated by Pierre Bourque in 1994. He attempted one more return to municipal politics in 1998, running under the Équipe Montréal banner, only to lose once again to Bourque's Vision Montreal.

He then moved into the banking sector, working as the senior director of business development for the Caisse Desjardins.

In 2014, Doré announced he was suffering from incurable pancreatic cancer.

At an event last winter marking the MCM's 40th anniversary, at which he was the guest of honour, Doré said one of the party's greatest achievements was uniting anglophone and francophone Montrealers under common goals.

Doré is survived by his wife and two daughters.

Mayor Denis Coderre said a public visitation for Doré will be held Saturday and Sunday at Montreal City Hall. He said there will also be a civic funeral, though no date has been announced.