Canadians and Quebecers are remembering the polarizing force that was "Monsieur" Jacques Parizeau, the man who nearly led Quebec to independence in 1995.

Quebec's National Assembly has suspended work for the day and its flag is at half-mast, in remembrance of former premier Jacques Parizeau. Parizeau, a polarizing force in Quebec and across Canada, was perhaps best known as the man who nearly led Quebec to independence in 1995.

You may not agree with him, but you have to admire his dedication and his honesty.- Terry Mosher, editorial cartoonist

He also said the Montreal head offices of Quebec's pension fund manager, the Caisse de dépôt, will be renamed in Parizeau's honour.

Parizeau is hailed as one of Quebec's most respected economists and is credited with creating the foundations of the modern Quebec, including the province's pension fund and its hydroelectricity system.

Respected by allies and opponents

Many of those who fought against him in the 1995 Quebec referendum remembered him as leader who earned their respect, despite their political differences.

Jean Charest, who faced off against Parizeau in the referendum, called him a "formidable opponent."

During an interview with CBC's Daybreak, Charest remembered Parizeau as "larger than life."

He said the "yes" side of the referendum would never have come so close if it wasn't for Parizeau's special talent — determination.

"He had all those talents, plus one ingredient, which makes a huge ingredient in the course of history — and that was determination," Charest said.

"M. Parizeau again demonstrated that he had that unique quality of determination that allows things to change, that makes things happen."

"You may not agree with him, but you have to admire his dedication and his honesty," he said.

"He was an easy caricature to capture right from the get go."

On behalf of all Canadians, Laureen &amp; I extend our deepest condolences to the family &amp; friends of former Premier, Jacques Parizeau.

Former Bloc Québécois leader Gilles Duceppe said Parizeau commanded the respect of those around him.

"He was …  a very rational person, and at the same time with a lot of passion."

The former premier, who had a penchant for three-piece suits, was called Monsieur Parizeau, even by some of his closest friends.

Duceppe said Parizeau had a British sense of humour, but spoke old-school French.

Prime Minister Stephen Harper was among those who shared their condolences.

Saddened by the loss of Jacques Parizeau, a formidable intellectual opponent, always ready to offer an argument noone else had thought of.

He tweeted in French that Parizeau was a "talented man, respected and passionate." 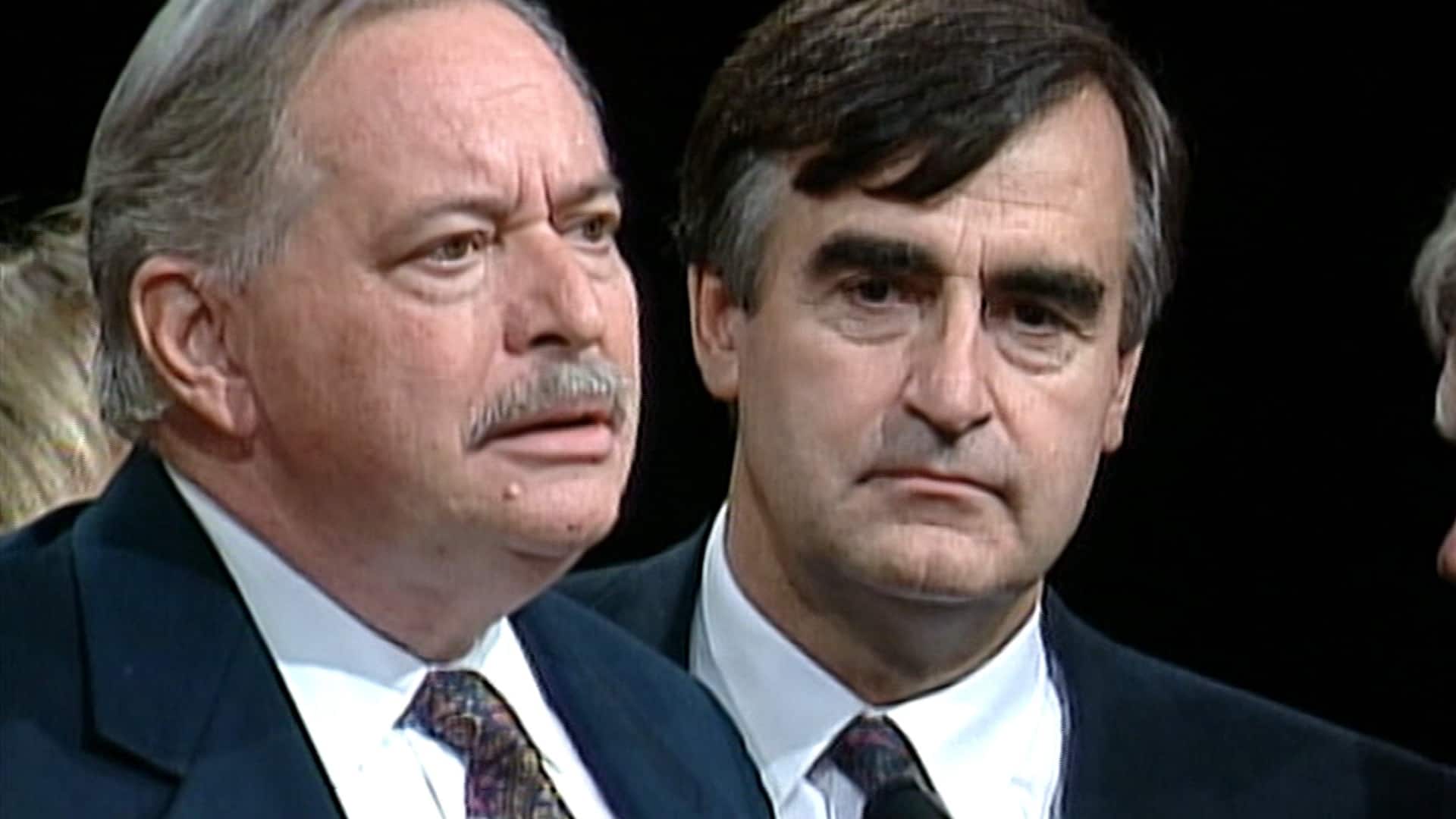 Tributes pour in for Jacques Parizeau

6 years ago
3:13
Tributes are pouring- in from across the political landscape today for Jacques Parizeau, who died Monday evening at the age of 84. 3:13

What were Parizeau's true colours?

Parizeau will be remembered by many for the infamous speech he delivered following the yes side's narrow loss after the 1995 referendum.

He blamed the loss on "money and the ethnic vote."

But supporters say the statement was out of character.

"I think it would be very unfair to consider those words summarized his thoughts," said Jean Dorion, a former Bloc Québécois MP and the former president of the pro-sovereigntist St-Jean-Baptiste Society.

Dorion said Parizeau's true colours came through when he slammed Quebec's proposed Charter of Values two years ago, accusing Pauline Marois's government of reacting to a growing fear of Islam.

The new leader of the Parti Québécois, Pierre Karl Péladeau, said if it weren't for Parizeau, he wouldn't be where he is today.

Péladeau said he met with Parizeau before deciding to jump into politics.

"He encouraged me to continue to reflect on it," Péladeau said.

A vigil has been planned in Parizeau's memory starting tonight at 8 p.m. ET outside Quebec's National Assembly.