The English-language version of the speech then-premier Jacques Parizeau would have given in the event of a Yes victory in Quebec's 1995 sovereignty referendum is now publicly available. 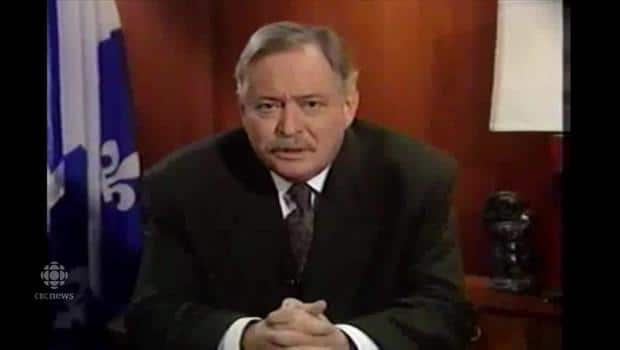 5 years agoVideo
19:10
Quebec's provincial archive has posted the full English version of the speech Parizeau never got to give. 19:10

The English-language version of the speech then-premier Jacques Parizeau would have given in the event of a Yes victory in Quebec's 1995 sovereignty referendum is now publicly available.

A French version of the speech was made public several months ago when Radio-Canada satirist Infoman — Jean-René Dufort — broadcast a copy that was given to him by Lisette Lapointe, wife of the late Parti Québécois leader.

It had also been broadcast by Radio-Canada in the months after the referendum, and was read aloud at a tribute to Parizeau following his death last year.

Lapointe recently donated a VHS tape of the speech to Quebec's provincial library and archives.

The library posted a 36-minute video last week, which contains the entirety of both the English and French versions of a speech that has been shrouded in lore for years.

Parizeau recorded the speeches on the afternoon of the referendum vote, Oct. 30, 1995. Copies were delivered to several media outlets, including CNN, with instructions that the tape be broadcast that night should the province vote for independence.

The instructions also stipulated the tape be destroyed if the No side won.

When the No side eked out a victory, Parizeau delivered a rambling broadside that notoriously blamed the sovereignist loss on "money and the ethnic vote."

He resigned the following day, and those comments haunted Parizeau for years, prompting speculation about what he would have said had the outcome of the vote been different.

In sharp contrast to the No speech, Parizeau appears calm and assured in the recording available on the provincial library's website. Early in the speech, he addresses Quebec's anglophones directly.

"I would like to speak specifically to members of Quebec's English-speaking community, and reiterate the importance to us of their presence among us and our commitment to respect and defend their rights," Parizeau said.

"Also, our commitment to take all measures necessary to guarantee in Quebec's new constitution...[that] the identity of their community and their institutions is preserved."

He also seeks to reassure immigrants and First Nations that they too will be welcome in an independent Quebec.

Parizeau concedes after Quebec votes No in 1995 referendum on separation

25 years agoVideo
24:13
A razor-thin victory for the No side prompts relief, resentment and one controversial concession speech. 24:13

'What will happen in the days to come?'

The video complicates the impression that Parizeau would have immediately severed ties with Canada via a unilateral declaration of independence.

"What will happen in the days to come? The sovereignty of Quebec will not be proclaimed right away," Parizeau said. "It can be as much as a year before the [Quebec] national assembly makes that proclamation."

In the meantime, he added, little would change in the daily lives of Quebecers. They would continue to pay the GST and receive federal benefits.

"Nothing will change tomorrow in our jobs or in our businesses," he said.

But when the Quebec legislature moves to proclaim sovereignty, Parizeau says, "things will become more simple."

"The Quebec that is beginning today must mobilize our energies, must call on the imagination," he says as he closes the speech.