'He broke the values we had': Innu women at Quebec MMIWG hearing recount priest's alleged abuse

Women from Innu communities all along the north shore of the St. Lawrence River shared their stories of being sexually abused by a once-lauded Catholic priest who worked in their territory for four decades, until his death in 1992.

Women from Innu communities all along the north shore of the St. Lawrence River shared their stories Wednesday of being sexually abused by a once-lauded Catholic priest who worked in their territory for four decades, until his death in 1992.

The testimony came on the third day of Quebec hearings of the national inquiry into missing and murdered Indigenous women and girls (MMIWG), taking place in Mani-Utenam, Que., near Sept-Îles, 900 kilometres northeast of Montreal.

Father Alexis Joveneau arrived in Quebec from Belgium in the early 1950s. He worked in several remote Innu communities for four decades and died in Unaman Shipu, better known as La Romaine, in 1992.

On Tuesday, Innu elder Mary Mark described to the commissioners how Joveneau used to ask her to sit on his lap and start touching her chest when she went to confession.

"I am sure I wasn't the only one to live that kind of thing — there were others," said Mark, from the community of Pakua Shipu near the Labrador border.

Thérèse Lalo also testified about alleged abuse by Joveneau, saying she never spoke about what she went through until the preliminary hearings of the inquiry visited Pakua Shipu in September.

"I could not talk about it; he was like a god."

She said he was feared in the community because he was admired, charismatic and had moral authority.

On Wednesday, Simone Bellefleur from Unamen Shipu, 460 kilometres east of Sept-Îles, told commissioners that Alexis Joveneau started abusing her when she was about 10 and didn't stop until she married at 19.

"Normally, when we go to confession, we kneel down, but he'd ask us to sit on his lap," Bellefleur told the inquiry.

"He was behind me, he started touching my breasts and went down towards my hips."

"Often he'd invite us to do the dishes in his home, to do the same things. Sometimes he'd take us one after the other," said Bellefleur.

Noella Mark, also from Unamen Shipu, said hearing other women's testimony about Joveneau on Tuesday took her decades into the past.

"It was almost like he was in the room, that he was here," said Mark.

"I hated that smell — his breath. I smell it now."

Mark said the abuse started when she was seven and continued until she was 15 or 16.

"I went through the same thing, sat on the priest's lap, he would stick his tongue in my ear."

Mark said it took her a long time to understand the impact this abuse had on her spirit and said she was filled with anger for a long time.

"I understand abusers now, where it comes from, why they abuse others."

Both women and men who spoke during the hearings described the power Joveneau had over the Innu communities where he worked.

Mark said she never talked about the abuse because "he was considered to be the chief of the village, the head."

Joveneau was also instrumental in the forced displacement of several families from Pakua Shipu to Unamen Shipu in the 1960s, more than 175 kilometres away.

Ambroise Mark remembered making the trip with Joveneau as a child, arriving in a desolate town with no amenities to house the new families.

Several decided to return to Pakua Shipu after seeing the dismal living conditions on the new reserve.

Mark said Joveneau punished them, trying to force them out.

"I remember being told there were shipments that never made it to the families, and he tore up cheques for the people of Pakua Shipu," Mark said.

Deep scars in the community

Simone Bellefleur said today she rarely crosses the threshold of a church, except for weddings or funerals.

"The priest showed us how to fight amongst ourselves. He broke the values we had. He broke us that way," she said.

Bellefleur admitted the anger she carried since her childhood was sometimes taken out on her children. 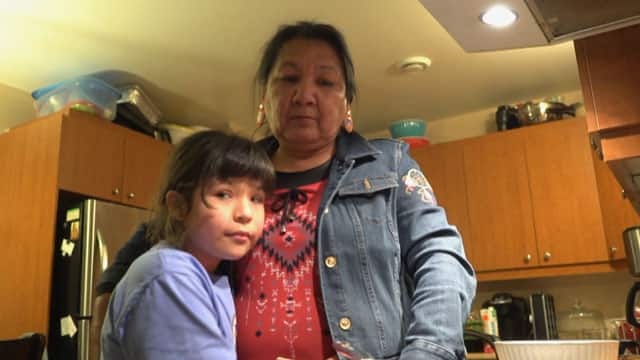 Indigenous parents in Quebec sent their children south for medical care, some never came back

3 years agoVideo
2:36
Missing Indigenous kids are a key issue for the national inquiry into missing and murdered Indigenous women and girls. An investigation Radio-Canada's Enquete has found cases where children taken away for medical treatment were never returned, with parents left to believe they had died 2:36

It is only recently that she's managed to heal, she said, along with her husband who she said was also physically abused by Joveneau.

Noella Mark said she, too, has healed only after undergoing therapy.

She said Unaman Shipu is shattered, however, and drug and alcohol abuse is rampant.

"We are experiencing lots of problems. We don't know where to turn to get help."

Joveneau was a member of the Missionary Oblates of Mary Immaculate (OMI), a congregation founded in France in the early 1800s which sent its first missionaries to Canada in the 19th century.

"The Oblate Fathers are deeply concerned following the testimonies heard during this inquiry and hope light can be shed on these events," the congregation said in a statement, after the first allegations against Joveneau were raised at the inquiry on Tuesday.

"The Oblate Fathers fiercely hope that the members of the community can testify openly to find peace. We condemn any form of physical or psychological violence."

The inquiry's hearings began in Whitehorse in May, and proceedings have taken place in British Columbia, Manitoba, Nova Scotia, Alberta and Saskatchewan so far. Hearings are scheduled for Thunder Bay, Ont., and Nunavut next month, and for Yellowknife in the new year.

The planned stop in Rankin Inlet in December has been postponed, and will now be held in January, CBC News has learned.