In what they described as an "exceptional" measure, four Crown prosecutors publicly explained why so few criminal charges were laid, despite having been given 38 files by Montreal police, who conducted the investigation.

Of the 38 cases, one was kicked back to police for further investigation. In many of the remaining cases, there was insufficient evidence of criminal wrongdoing or victims were unable definitively identify a suspect, the prosecutors said.

The Crown did say the investigation produced enough evidence to pursue charges against two retired police officers in Schefferville, Que.

Both Alain Juneau, of the Sûreté du Québec, and Jean-Luc Vollant, of Schefferville's Indigenous police force, have been charged for sex-related crimes. 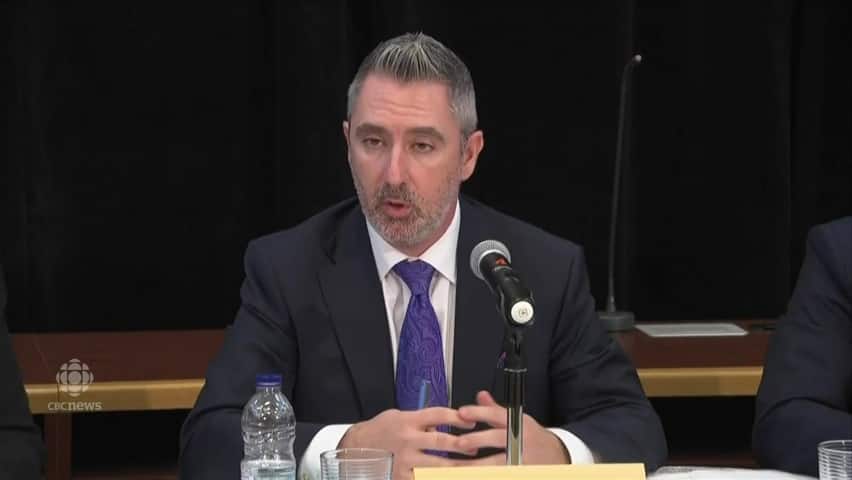 Crown explains decision not to pursue charges against Val-'Or police.

4 years ago
0:36
Crown explains decision not to pursue charges against Val-'Or police. 0:36

But that is unlikely to be enough to ease the concerns of Indigenous people living in the Val-d'Or area. It was the accusations of women there, who claimed they were abused by provincial police officers, that prompted the investigation in the first place.

Six provincial police who served in Val-d'Or were suspended after the allegations surfaced. None of them will be prosecuted.

"The lack of charges does not mean the events did not happen, but the prosecutor has to be satisfied that it is beyond reasonable doubt for a trial," Crown prosecutor Sylvain Petitclerc said.

That has left Indigenous communities around Val-d'Or questioning the legitimacy of the justice system and calling for a provincial inquiry into systemic racism.

One Indigenous leader predicted the decision not to charge the Val-d'Or officers would prompt civil unrest.

"I can guarantee you that there will be chaos in some parts," said former Pikogan chief Richard Kistabish. "There will be some very angry people who will show up in the streets."

Outside the Val-d'Or courthouse, while the Crown representatives explained their decision, more than 100 people — both Indigenous and non-Indigenous — gathered in protest.

A drum circle formed and candles were lit in solidarity with the victims. Several women exchanged hugs; one of them held a sign that read, "Am I Next?"

"The justice system is not adapted to the realities of First Nations," said Ghislain Picard, chief of the Assembly of the First Nations of Quebec and Labrador.

"There is something that is not working here."

'I don't believe in the justice system'

The Crown's decision not to press charges caught no one by surprise when it was finally officially announced on Friday.

Prosecutors spent the week meeting with many of those who made accusations, and news leaked several days ago that the officers from Val-d'Or would not face prosecution.

On Friday, before the news conference at the courthouse, the prosecutors met with several Indigenous leaders as well as Val-d'Or Mayor Pierre Corbeil.

"The Quebec system is not made for us Indians," said Françoise Ruperthouse, a Pikogan councillor, as she made her way to her car.

"They said they believed the women, but that there was no proof."

Ruperthouse was then approached by Janette Brazeau, a residential school survivor.

"We are humans too," Brazeau said as she hugged Ruperthouse.

The Val-d'Or mayor addressed reporters after the morning meeting and reiterated calls for an independent inquiry into the allegations. The Quebec government has repeatedly refused that request.

Corbeil's statement, however, was interrupted by Jimmy Papatie, the former chief of the Kitcisakik community, south of Val-d'Or.

"I don't believe in the justice system in Val-d'Or," Papatie cried out at the mayor. "How do you want us to live next to your city … when nothing changes."

Corbeil tried to soothe him.

"Jimmy I've known you for a long time," the mayor said. "I used to be your dentist."

Picard said the Assembly of the First Nations of Quebec and Labrador would continue to push the Quebec government to hold a public inquiry.

That desire was echoed by many who attended the protest outside the courthouse.

But Native Affairs Minister Geoff Kelley indicated late Friday evening that the government wouldn't change its position in light of the outcry at the Crown's decision.

The government has asked that the federal inquiry into murdered and missing Indigenous women look into the allegations of abuse in Val-d'Or.

"The situation in Val-d'Or is exactly the type of situation that the national inquiry will look at," the federal commission of inquiry said in a statement Friday night.

"Policing is a crucial government service that certainly falls under the inquiry's mandate."

The union representing Quebec's provincial police, for its part, encouraged the Quebec government to continue to resist calls to hold a public inquiry of its own.

"We dare to hope that the government won't cede yet again to pressure and won't go so far as to establish a commission of inquiry, or another committee to review the Crown's decision," the Association des policières et policiers provinciaux du Québec said in a news release.

The union also called out Radio-Canada for its reporting on the Val-d'Or scandal. It was a Radio-Canada investigative team that first aired the allegations of police mistreatment in October 2015.

The union referred to the reporting and the ensuing controversy as a "witch hunt." A group of 40 provincial police officers are suing Radio-Canada, claiming the Enquête documentary was biased and defamatory.