Quebecers without power may have to spend another night in the dark, officials say

While Hydro crews scramble to restore electricity to 140,000 customers in southern Quebec, firefighters and police have been scrambling, as well — responding to dozens of emergencies ranging from carbon monoxide poisoning to traffic pileups.

Thousands of people in southern Quebec might have to spend another night without electricity.

Power will not be fully restored for at least another 24 hours, emergency officials said Tuesday afternoon.

A little more than 140,000 hydro clients across southern Quebec are without power on Tuesday evening after freezing rain hit the region on Monday.

Most of those cases were in the regions of Laval, Lanaudière and the Laurentians, all north of Montreal.

"There are lots of little power breaks due to the storm, which is why it's taking time to rectify the situation," said Sylvain Gariépy, a division chief of operations with the Laval fire department.

Hydro-Québec says the power will not be fully restored until Wednesday.

Quebec Premier François Legault tweeted Tuesday evening that he is following the situation closely, and urged Quebecers to contact their municipalities to find out what kind of emergency measures are in place.

"Be careful and don't take risks," he said.

In Laval, the Lausanne centre set up cots provided by the Red Cross. About 50 people would be able to take shelter there Tuesday night and another shelter would accommodate 50.

"Everyone who would need help, any kind of help, don't hesitate to call your municipality."

She said the provincial government is in constant contact with all municipalities.

"If there are any more needs, we will adjust the situation," Guilbault said.

"It is really hard work for them today," said spokesperson Cendrix Bouchard.

Gariépy said his crews have responded to fires, including house fires caused by candles.

He said there have also been two cases of carbon monoxide poisoning, including one family that brought a barbecue in the house to warm up. A man was also found unconscious after authorities believe he inhaled toxic fumes from a fuel-burning generator he had indoors.

Gariépy said five people in total have been taken to hospital so far, but all are in good condition.

The power outages began Monday morning as freezing rain and high winds rolled into the province, coating surfaces in slick ice and knocking down trees and power lines.

Hydro-Québec spokesperson Louis-Olivier Batty said the power company has deployed every available team to restore power as quickly as possible.

Crews have to repair an estimated 800 individual outages, mostly in Laval, the Laurentians and Lanaudière — and to a lesser extent, in the regions of Montreal, Montérégie, which is east of Montreal, and Outaouais, near Ottawa.

"In many areas, before our crews can access the network, we have to clear these branches and trees, so it's not helping our crews to do the work," he said.

Murielle Simard was at home yesterday in Laval when a huge branch broke and smashed into the power lines, immediately cutting out power. <a href="https://t.co/kgqud6K1z1">pic.twitter.com/kgqud6K1z1</a>

In Laval, authorities are going door to door to check that seniors and people in vulnerable positions are safe.

Batty encouraged people to check on friends and relatives and to make sure that carbon monoxide and smoke detectors are working properly.

Laval police spokesperson Evelyne Boudreau said the city is providing community space where people can keep warm, eat and take a hot shower. Without street lights operating, she said a number of car accidents had been reported, including one pileup.

"Police officers are assigned with every other employee of the city to patrol the streets and to be on the lookout for people using generators, for different people asking for help," said Boudreau.

Watch as officials and residents of Laval talk about the situation: 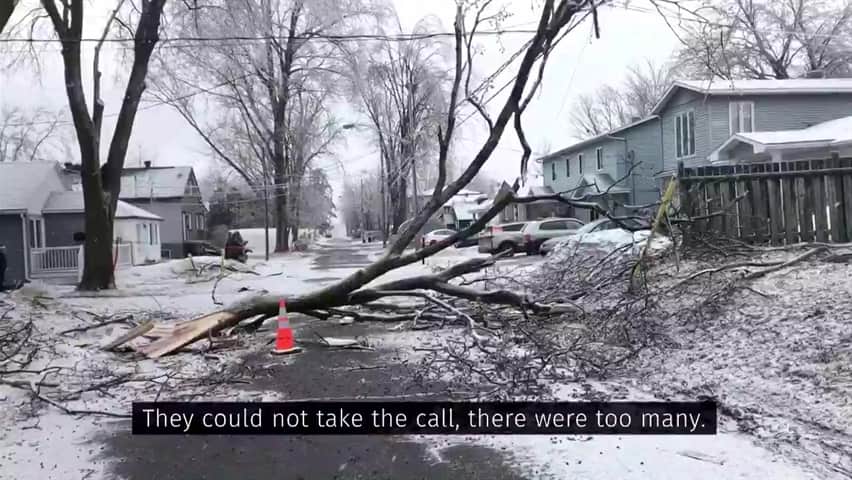 School closures across the region

The Laval school board, the Commission scolaire de Laval, will close its elementary schools and high schools Wednesday because of the ongoing power outage.

The Commission scolaire des Affluents in the Lanaudière region has also closed all its schools and education centres for Wednesday.

On Tuesday, school boards across the Laval, the Laurentians and the Lanaudière regions closed schools for the day.

The school boards affected include:

Yannick Roussy woke up Tuesday to see a lot of branches on his property in Laval. He has been without power at his home since 10:30 a.m. Monday.

He was heading into work Tuesday, not knowing if there was power there, but he was certain he'd be ending the day by cleaning up his property.

"I don't have a choice," he said. "My trees look a little bit sick. A lot of branches fell. A lot are broken."

Vimont resident Yannick Roussy woke up to half a tree on his lawn. He’s been without power for almost 24 hours and is spending his time before work hauling the branches away. He’s laughing about it though, says things like this happen. <a href="https://t.co/hLJxEgPLdD">pic.twitter.com/hLJxEgPLdD</a>

With files from Radio-Canada and Kate McKenna