How Montreal takes 300,000 truckloads of snow off the street every winter

It takes 3,000 workers to remove snow from the streets after every major snowfall. Montreal's snow-removal operation is one of the largest in the world. This is how it works.

Montreal runs one of the largest snow-removal operations in the world. It takes an army of 3,000 workers to remove snow from 10,000 kilometres of Montreal streets each winter. That adds up to $165 million a year.

After a major storm like the one the city had last week, crews go to work around the clock. Streets are cleared of cars; snow is plowed and dropped into trucks and hauled away to one of the city's 29 snow dumps.

About 300,000 truckloads of snow are taken off the street over the course of one winter.

The downtown snow-removal operation is run out of a city garage east of the Jacques-Cartier Bridge.

At the garage, a bulldozer mixes salt and gravel, and that mixture gets spread on the streets.

Montreal buys about 200,000 tonnes of salt every year.

Usually the salt comes from a mine in Goderich, Ont., but because of a strike in Goderich, this year, the city had to import its salt from Chile — making it more costly.

"Hopefully, it will be from Ontario next year," says Sabourin.

Upstairs, above the garage, two city foremen are on walkie-talkies and on cell phones, issuing orders to the drivers in the convoys already out on the city's downtown streets.

Above their desks is a map of Montreal that shows the priority streets will get plowed.

Most Montrealers have witnessed what goes down on the street: the military operation that begins with the sound of tow trucks blaring a warning to vehicle owners whose cars are still parked in demarcated snow-clearing zones.

Those cars will be towed if they're not moved within minutes.

Next come the plows — sometimes three, one after another, scraping the streets and piling up a long column of snow where it can be picked up by the blowers coming up behind.

Those blowers, in turn, swallow up that snow and expel it into the first in a long line of giant dump trucks.

As soon as one truck is full, it barrels away; the empty truck idling behind it moves forward, and the blower resumes its work.

Behind the scenes, at the snow dump

The heavy truck rumbles on to one of the city's 29 dump sites — this one, near the Port of Montreal.

Each truck is equipped with GPS. A city employee at the dump checks the amount of snow the truck is carrying against the GPS data, to make sure the city is getting what it paid for from its private contractors.

In the past, Sabourin says, the city suspected some dishonest contractors would cheat the city, by selling snow they'd removed from private lots.

Sabourin says with the GPS system, "We can't be fooled."

Up until the end of the 1980s, snow was simply dumped into the St. Lawrence River, polluting the river system with salt and gravel.

Now, a third of the snow goes into Montreal's sewer system, and is treated along with the rest of Montreal's sewage before being released into the river.

Why doesn't it freeze the pipes, you ask?

Sabourin says enough people are flushing bath water and other warm liquids down the drain to keep the snow moving.

Less snow is put into the sewer system at night, when the rest of Montreal is sleeping and not flushing.

Sabourin says it's taken eight days so far to clear the snow off the streets from last week's near-record snowfall.

The city expects to see more snowfalls of that size in the future, with climate change, and Sabourin says the city is already planning for it.

Here's a behind-the-scenes look at the action: 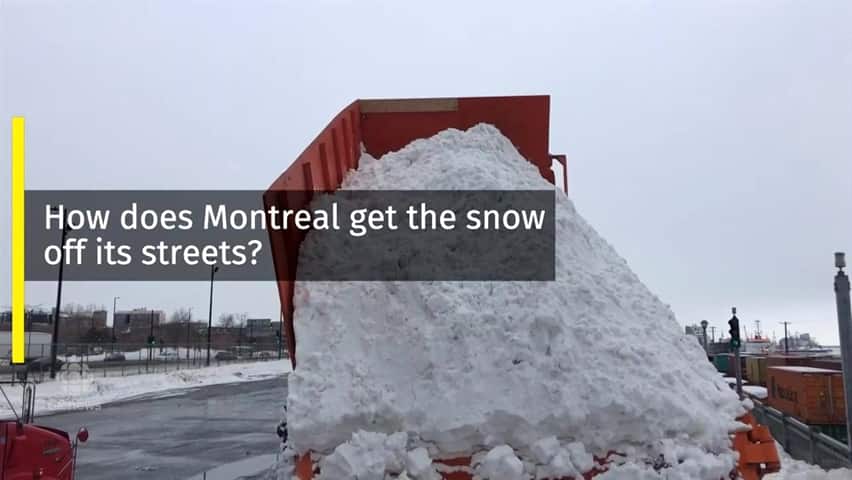 From street to snow dump