Dr. Horacio Arruda is a media star. What's making him so popular?

As the subject of dozens of internet memes and the catalyst for countless online recipes for pastéis de nata, Dr. Horacio Arruda, Quebec's public health director, has emerged as an online star in recent weeks.

For many Quebecers isolated in their homes, Arruda's unfiltered assessments of the COVID-19 situation, mixed with down-to-earth, relatable asides, have been a beacon of hope.

But who is he?

When it comes to global pandemics, COVID-19 isn't the 59-year-old's first rodeo. That might explain the calm in his voice and frankness of his words that he's become known for in public briefings.

In the midst of the 2009 H1N1 crisis, Arruda was second in command in Quebec's public health department.

"If they had asked me [who would've] been one of the best people to manage this type of situation, I would have said Horacio Arruda," said Yves Bolduc, who was the province's health minister from 2008 to 2012.

"When most people start with this type of file, often, they have to learn on the job. But he already lived through the experience of a public health system battling an epidemic," Bolduc added.

In 2009, under Bolduc's direction, Arruda coordinated H1N1 vaccination efforts in the province.

Four years later, after becoming the head of the department, Arruda was one of the first called to the scene when a train exploded in Lac-Mégantic, killing 47 people.

"When the tragedy happened, right away, that morning, I was at the scene in Lac-Mégantic," former provincial health minister Réjean Hébert told Radio-Canada.

"The first thing I did was call Mr. Arruda."

Hébert described how Arruda got himself to the scene quickly and how he rapidly called for the evacuation of part of the municipality, as it had been exposed to toxic fumes.

Arruda worked to put in place security measures in the area, and it was he who eventually gave the green light for residents to return to their homes.

At the time though, Arruda mainly worked behind-the-scenes and rarely took the public spotlight.

"It's a good demonstration of Horacio's personality," Hébert said.

But the current climate is completely different from that of Lac-Mégantic. Where that was a provincial crisis, COVID-19 is one that is international, and one that is surrounded by public panic and misinformation.

Quebec's population needed someone rational and measured, who would keep them informed but calm.

"Mr. Arruda is someone calm, who has a very pleasant personality," Hébert said.

"He's talented in his ability to take scientific knowledge and apply it in a really practical, concrete way, while taking political context into account."

Arruda has accomplished that using more than just his words. Many have noticed his animated facial expressions and his use of hand gestures to explain and emphasize important things to the public. He has, on a few occasions, put his hands together and "begged" for the population to listen to his directives.

Just last week, in one of the government's daily public briefings, Arruda took it upon himself to demonstrate why the general public should not be using face masks to protect themselves from the virus. 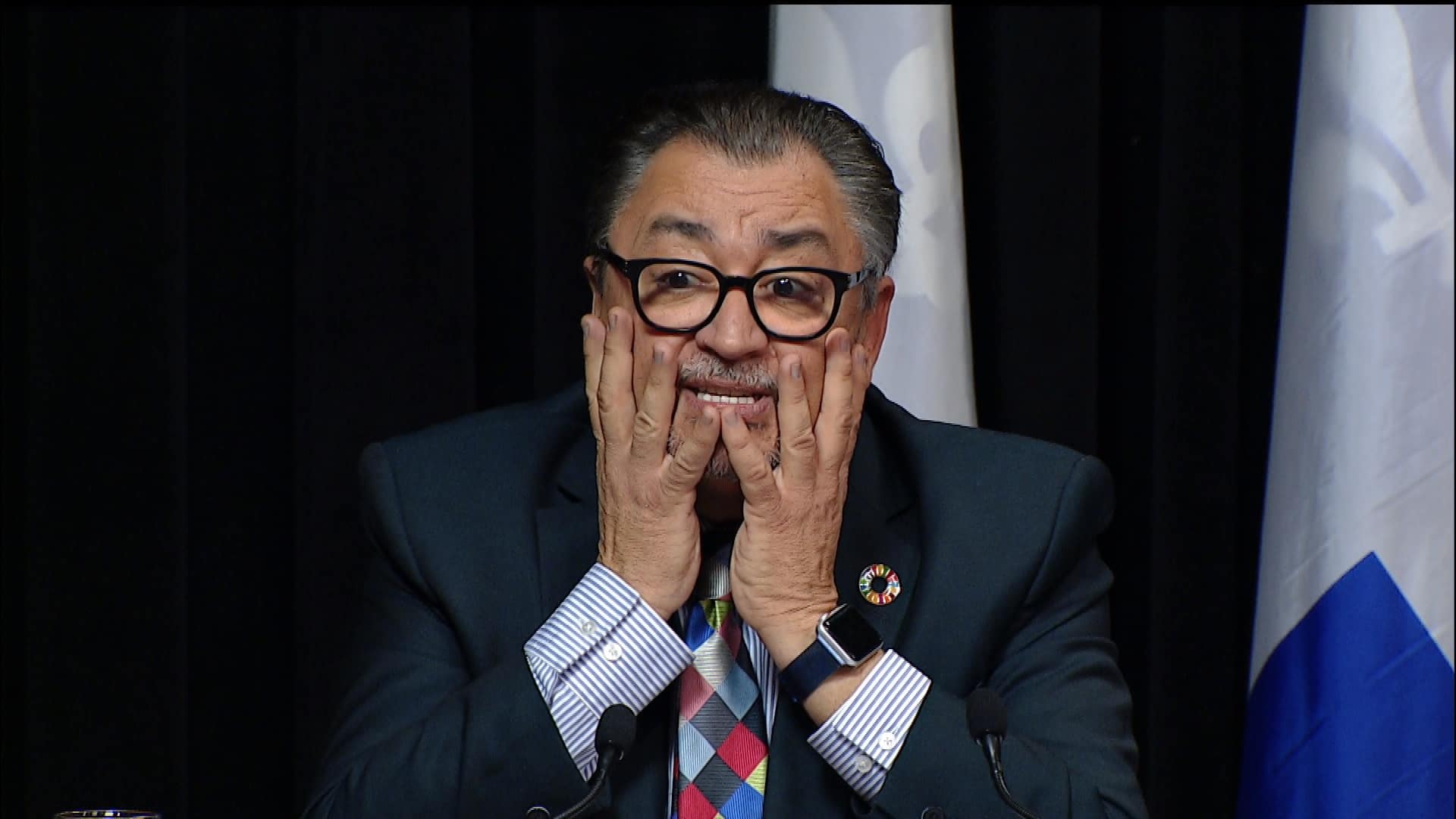 Why masks give a false sense of security

12 months ago
0:54
Quebec's director of public health gives a very animated demonstration of why masks won't protect you from COVID-19. 0:54

Shortly thereafter, he got the public's attention when he suggested Quebecers do something they don't normally do in an effort to break the boredom of self-isolation.

Arruda himself said he will be baking Portuguese tarts, also known as pastel de natas. (Pastel is singular; pastéis is plural.) The comment inspired dozens of internet memes and online recipe sharing.

Born in Sainte-Thérèse in Quebec's Lower Laurentians, Arruda was the only child of a Portuguese couple. His father worked in an aluminum plant and his mother had decided to move to Quebec in hopes of better economic conditions.

Arruda finished his doctorate in 1983 at the Université de Sherbrooke, and followed it with a specialization in community health and prevention in 1988.

Today, Arruda has three children of his own: a daughter and two sons. Though his former bosses admit they know little of Arruda's personal life, they say his public image is reflective of the person he truly is.

"That's who we see when we're in daily contact with him: someone simple, natural, who says things very naturally," said Hébert.

Hébert still laughs when he thinks back to last January when, right in the middle of a press conference, Arruda blurted out, "Fear makes you do things that make no bloody sense."

"It was just so natural. Arruda isn't someone who's calculating," Hébert observed.

But that, Hébert said, is just what the public needs right now.

Based on a report by Radio-Canada's Alexandre Duval