Edward Burkhardt, head of the train company whose rail tankers filled with oil exploded in Lac-Mégantic, said his company follows "industry practice" in the way it moves and parks its trains, including the one that derailed and caused so much devastation. 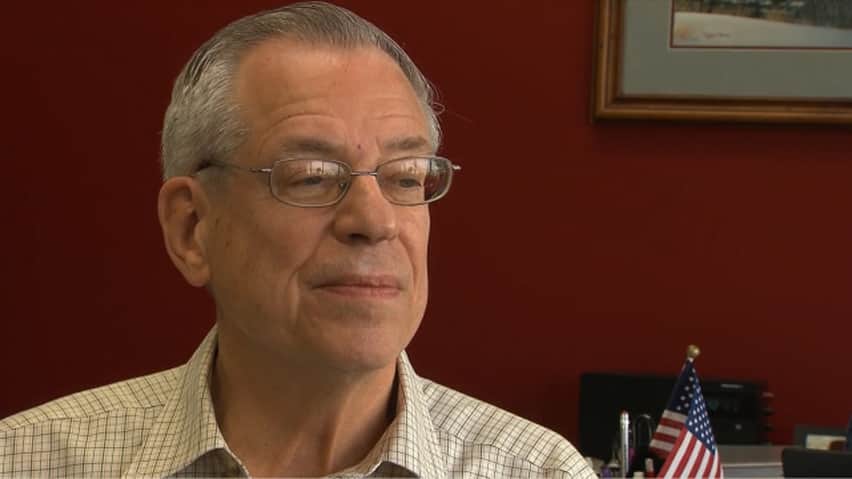 Edward Burkhardt, head of the train company whose rail tankers filled with oil exploded in Lac-Mégantic, said his company follows "industry practice" in the way it moves and parks its trains, including the one that derailed and caused so much devastation.

But he suggested that industry practice may not be good enough.

"We were following industry practice," said Burkhardt, chairman of Montreal, Maine & Atlantic Railway (MM&A) in an interview with Radio-Canada. "But you asked the question: Should this train be left unguarded with nobody there? I think that in the future, trains like like this should be guarded."

Burkhardt says that at the moment he has a "large but incomplete understanding" of what happened early Saturday when the train cars of crude oil exploded.

He said the train's engineer parked the locomotive, leaving one of the five engines running, to power the air brakes.

The engineer then left the train alone for the night, which Burkhardt said is standard practice.

He said when a fire broke out in the locomotive sometime later, the local fire department arrived, extinguished the flames and shut off the engine, unknowingly disengaging the brakes.

Burkhardt said fire department called one of MM&A's local track employees, who went to the scene to investigate the incident.

"I doubt track man or dispatcher realized air brakes would release at that moment the air pressure not being maintained," he said. "Had people been aware it probably still would have been too late to do anything about."

Burkhardt said the trains were left alone, and the brakes gradually released, letting the train run away, derailing when it hit a corner in downtown Lac-Mégantic.

"It's a fairly steep hill in the town and the train was going at a very high rate of speed," said Burkhardt.

"In the hindsight of a tragic accident you can say there was a mistake in the whole rail industry, coast to coast in two nations," said Burkhardt. "What we’ve done is totally consistent with the way it's been done in other railways everywhere."

Burkhardt said that MM&A’s insurance company is co-operating and is preparing to accept claims from those affected by the disaster in Lac-Mégantic, the small community where at least 15 people have been confirmed dead, about up to 40 still missing and much of the town’s downtown core is destroyed.

"There will be extensive claims. No doubt about it. We'll have to deal with it," Burkhardt said.

"We're trying to cope with this, but overall I think our operations are consistent with safety standards. Our safety records are pretty good," he said.  "I think we blew it on this instance. We blew it big time. This is awful. It's absolutely awful and very emotional to me when there are deaths and people out of their homes."

Burkhardt plans to travel to Lac-Mégantic Wednesday to meet with city officials and residents. He said he has received "numerous" angry phone calls and emails.

"That doesn't surprise me at all considering the aftermath of this disaster. It hardly could be otherwise. It's perfectly understandable that people are upset and angry with us," he said.

Burkhardt said MM&A has already made decisions changes to its operations, including ensuring trains are always guarded, and moving its engineer transfer location to Sherbrooke, about 100 kilometres west of Lac-Mégantic .

However, he said he would like the company to conduct its own investigations to determine improvements to its operations once it is allowed access to the wreckage. "One of  the problems we have is that the governmental safety authorities have completely pre-empted the investigation and there are people we'd like to talk to that we can't talk to because they're spending their time with the government people," said Burkhardt.

In 1999, Burkhardt was named "Railroader of the Year" by Railway Age magazine, one of 16 "Railroaders of the Century."

'There isn't any way to turn the clock back,' CEO says

In an exclusive interview with CBC's Mark Kelley, MM&A president and CEO Robert Grindrod said that because of the perimeter, he has not seen the derailment site and the surrounding areas where buildings were destroyed.

"We spend our whole careers trying to prevent things like this," Grindrod said. "But it has happened, and we have to extend our sympathies to all those affected, and determine the cause and take corrective action so nothing like this ever happens again."

When asked whether he is preparing for the fact that the company is in fact responsible for the accident, Grindrod said his company was "responsible in some fashion."

"All I'm saying is perhaps we're not solely responsible, but obviously we have a level of responsibility here, because it was our train —  it is a train operated by us," the CEO and president said. "And there are maybe all kinds of additional factors and extenuating circumstances, but some level of responsibility comes back to us no matter what."

Grindrod said there were "no words" he could offer to help the people who lost friends and loved ones.

"But please accept our heartfelt sympathies and our condolences," he said.

"There isn't any way to turn the clock back — the only person who could do that is God, and no human power can do that. "

He said the derailment and the devastation that followed will haunt him for the rest of his life and will always be with him, as it will be with many of those in the town who lost relatives, friends and neighbours.

"There isn't anything I can say that will make it any better," he said.