The Cirque du Soleil founder offered a sneak peek Tuesday morning inside the eight-storey pyramid that has popped up in the Old Port. The pyramid will be the site of multimedia shows all summer.

The inaugural multimedia show, Through the Echoes, starts June 1 in the Old Port

Discerning Montrealers may have noticed an eight-storey pyramid on the Clock Tower pier in the Old Port, not far from the Big Top where Cirque du Soleil has been performing Alegria since mid-April.

Laliberté, along with his production company Lune Rouge, announced last fall that a temporary pyramid structure would be built to house what he called "an amazing sand box" that would be "ready for the future."

Inside, the pyramid feels like an iMax theatre, with projections that tell a story through music, images and narration by the late philosopher Alan Watts.

The show focuses on the theme of human connection. It's described in its promotional materials as "a ballet of technology and multimedia."

For Laliberté, this is just another step in his life after leaving Cirque to Soleil. He sold his majority stake in the company in 2015.

The pyramid, he said, is primed for the integration of augmented reality technology as it develops. "We have the most advanced immersive technology." 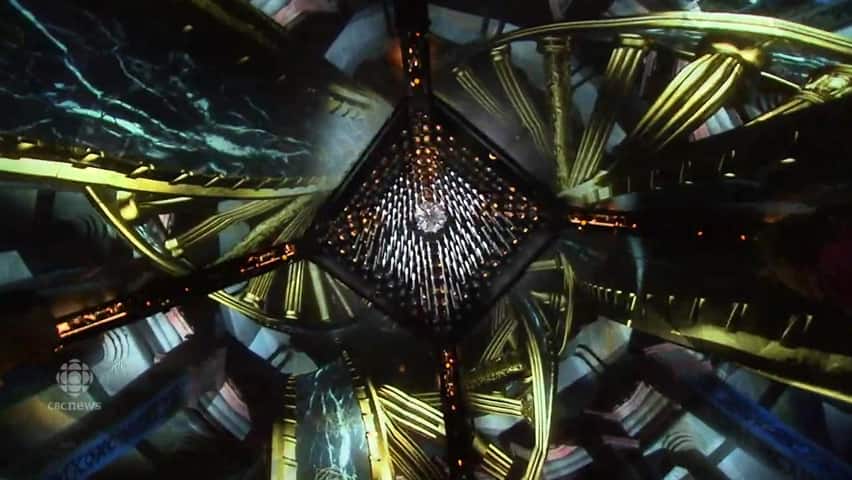 He said it was important for him to open the pyramid in Montreal. If it proves successful, he has his eye on establishing other such theatres "across the planet."

Many of the visual effects, and the projection technology, that goes into the show was produced locally, a testament to the available talent pool, Laliberté said: "I've always said, there's an enormous amount of creativity in Quebec."

Up to 1,000 tickets will be sold for each of the nightly showings of Through the Echoes. Laliberté also intends to develop special events that will use the space.

He says Lune Rouge is already working with local DJs to create special party events under the pyramid, and that they plan to develop morning events where people can exercise, do yoga or mediate with custom projections.

Shows begin June 1, with regular tickets for the hour-long show going for $41. There are discounted tickets for students, seniors and children aged eight to 15. Children under the age of eight will not be admitted.

Marilla Steuter-Martin has been a journalist with CBC Montreal since 2015.