A temporary foreign worker from Guatemala is alleging that managers of a Quebec chicken-handling company abused workers verbally, downplayed serious injuries and routinely forced employees to work upwards of 80 hours a week. 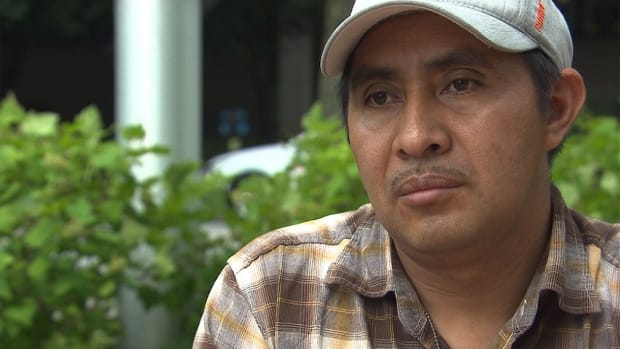 7 years agoVideo
3:11
Mario Garcia says an injury he got on the job led to his eventual firing from Service Avicole JGL. 3:11

A temporary foreign worker from Guatemala is alleging that managers of a Quebec chicken-handling company abused workers verbally, downplayed serious injuries and routinely forced employees to work upward of 80 hours a week.

Mario Rodolfo Garcia has been a temporary foreign worker in Quebec since 2006, spending between six and eight months each year as a chicken catcher for Service Avicole JGL. Based in Victoriaville, Que., Garcia and other workers travelled to farms around Eastern Canada, catching chickens.

He said he made a good living and sent the money he earned back home to Guatemala to support his wife and four children — until, he said, he was dismissed by his employer for being injured.

Garcia told CBC News he sustained a shoulder injury while loading chickens into a truck on June 7, 2013. He said he informed his employer of the injury and was taken to a doctor after making several complaints about the pain.

Garcia, who speaks only Spanish, was temporarily put on workers' compensation through the CSST, Quebec’s workplace health and safety board.

However, he said he lost his compensation shortly thereafter when the doctor told him he didn't believe Garcia was still in pain.

Garcia said that when he first came to Quebec, he was given forms and a contract in French and was told to sign. No Spanish version was given. He added that one of the forms he signed permitted the employer to keep his passport under lock and key and look at his personal mail.

Service Avicole JGL general manager Michel Légaré admitted to doing this when contacted by CBC News, adding that he was simply holding onto the passports to make sure they didn't get lost and to translate any French mail. Légaré said workers could have access to their passports at any time.

Garcia said the conditions the chicken-handling company provided were often "inhuman," with many workers having to share cramped quarters. He said the workers were subject to frequent verbal abuse and were often threatened with dismissal and deportation if they refused any aspect of the job or did not perform tasks in the time allotted.

He also alleged that he routinely worked more than the 40 hours he was contractually obliged to work and was not paid adequately for the overtime. He described working all night — prime chicken-catching time — and then having to pick up a second shift once the first one ended because one of the Quebec-born workers had called in sick.

He said he worked anywhere between 60 and 105 hours a week. He said that instead of paying him time-and-a-half for the overtime, the employer told him to keep an overtime bank so that he could receive a 40-hour pay cheque for weeks where he was scheduled to work fewer than 40 hours.

Garcia said he accumulated so many hours that the employer still owes him money following his dismissal — something the employer denies.

The Commission des normes du travail confirmed there have been 12 complaints lodged with it against Service Avicole JGL.

It also confirmed that of the 12, four complaints remain active and open: one for unjust dismissal, one for prohibited practices and two for psychological harassment.

Two other temporary foreign workers told CBC News that they incurred injuries while working on the job. One said he hurt his knee just one month after arriving from Guatemala; the other's injury cannot be disclosed because it would identify him. They are both still employed by Service Avicole JGL, but are on CSST-paid sick leave.

Légaré of Service Avicole JGL did not deny that some of his workers were injured on the job.

Afraid of getting fired

Migrant workers' rights policy analyst Eugénie Depatie-Pelletier said many temporary foreign workers in Canada don't speak up about bad working conditions because they are afraid of getting fired and blacklisted by employers.

It's unfair because they pay, they contribute to all these services, and we make sure they are in proper health when they come to Canada. But we send them [back] broken and often indeed unable to work.— Eugénie Depatie-Pelletier, policy analyst

“The vast majority of them will not report these conditions or abuse, basically because the moment they complain they risk being fired, and this would mean losing the right to work in Canada," Depatie-Pelletier said.

"One of the main problems is the fact that they’re bound to a specific employer. That means that they will accept for a much longer time — years, months — abusive situations including unsafe work conditions, and this leads to work accidents," she continued.

She said that oftentimes workers who were unjustly terminated by their employer don't have the funds or the time to obtain justice — or in the case of workplace injuries, health care — before returning to their home countries.

"It's unfair, it's unfair because they pay, they contribute to all these services, and we make sure they are in proper health when they come to Canada, but we send them [back] what, broken and often indeed unable to work, sometimes forever," Depatie-Pelletier said.

Garcia said that on the day of his accident, he reported the shoulder injury to his supervisor, who gave him Tylenol. He was told to keep working.

He was taken to a doctor and was briefly paid workers' compensation. However, he said that in response to his subsequent complaints about pain, he was told by the employer that he was lying and that nothing was wrong with him.

Légaré countered that, saying he did everything in his power to get Garcia the medical care he needed.

Garcia said he was fired after not showing up for work three times owing to pain.

The employer told CBC that Garcia's dismissal was in line with the rules.

A representative from the company later clarified, saying it had checked with the province's employment standards commission after Garcia failed to come in and was told, in this case, it would be classified as a "voluntary departure."

He said he’s unable to work because of the pain and is staying with a Guatemalan friend and his family in Montreal while figuring out his next steps.

Meanwhile, CBC News accompanied Garcia to a medical appointment at a Dorval medical and rehabilitation centre.

Dr. Ashwin Sairam said it’s rare that temporary foreign workers come for care in Montreal because they are usually located in remote areas of Quebec.

Sairam said it was "depressing" to see cases like Garcia’s because the worker has little recourse in the event they get injured.

"There’s very little way to objectively prove when something happened unless it’s a fracture," he said.

Service Avicole JGL's Légaré initially denied the worker complaints that CBC News presented to him, but later called back to say he had taken a closer look at the files.

We are prepared to correct all that needs to be corrected so that our business can be 100 per cent legal.— Michel Légaré, Service Avicole JGL

He said it was only in exceptional cases that employees worked 80 hours, but said the workers who did work those hours did so willingly.

He also said that the company used to deduct one hour from each worker’s day as an unpaid break, but after a complaint was made, the Commission des normes du travail got involved.

Légaré said the company changed it back to 30 minutes of unpaid break time and added that the unpaid time was reimbursed to workers.

He said it is difficult to keep the rules straight all of the time.

"That wasn’t legal on our part and we corrected it," Légaré said. "We are prepared to correct all that needs to be corrected so that our business can be 100 per cent legal."

He also said the issue of not paying overtime at time-and-a-half had been "fixed."

Légaré confirmed the work is physically demanding, adding that injuries did happen, but employees who got hurt received adequate treatment and free interpreters to speak to the doctors.

Légaré denied Garcia’s claim that staff weren’t always paid the time-and-a-half that was due to them. He also said he wasn’t aware of anyone berating or threatening the workers, saying that wouldn’t be tolerated.

Noé Arteaga of the Immigrant Workers Centre said Garcia's situation is one many temporary foreign workers experience and said they should have the same rights to unionization, holidays and overtime pay as Quebecers.

He said he has met many temporary foreign workers across Quebec who have had their illnesses mistranslated to doctors, which he said was an attempt to block their access to workers' compensation.

According to the CSST, the workplace health and safety board has created a video and a flyer in Spanish explaining to agricultural workers that they have the same rights and responsibilities as Quebec workers.

"If they are injured, CSST will pay them indemnities, even when they go back to their own country, if their file is still open at that point. A foreign worker that has a valid working permit and that works for a Quebec employer has the same rights that all Quebec workers have," the CSST said in a statement.

Garcia told CBC News that he wants to receive medical care in Quebec so that he can continue as a temporary foreign worker. He also wants the chicken-catching firm and its workers’ quarters to be inspected as soon as possible.

He said he loves to work and was depressed about not being able to. He said his wife and children, including a very young son, are depending on his income.

Garcia said he came forward so that the government could hold employers who take advantage of temporary foreign workers accountable.

"I just don't want this to happen to other people," Garcia said.