Just For Laughs has announced a restructuring after women have come forward with allegations of harassment and sexual assault against its founder and now former president.

Just For Laughs has announced a restructuring after nine women came forward with allegations of harassment and sexual assault against its founder and now former president.

The women are accusing Gilbert Rozon of misconduct spanning three decades, according to French-language newspaper Le Devoir and radio station 98.5 FM. The allegations have not been verified by CBC/Radio-Canada and have not been proven in court.

As part of the restructuring, Rozon is officially no longer part of any of the business affairs of the company after he announced he would be stepping down on Wednesday night.

Guylaine Lalonde will take over as president, and an independent board of directors will be put in place immediately.

Rozon, also vice-president of the Chamber of Commerce Metropolitan Montreal and the man in charge of Montreal's 375th anniversary celebrations, said he would resign from those roles as well.

Rozon, 62, made the announcement on his Facebook page Wednesday within hours of the allegations being published online.

In the statement, he did not admit to or even comment on the allegations, only saying he was "shaken."

Quebec actress Salomé Corbo told Le Devoir that Rozon assaulted her at a party in 1990 when she was a teenager. She said Rozon grabbed her and slid his hand into her underwear.

Producer Lyne Charlebois told Le Devoir that she and her partner had dinner with Rozon in 1982, and then went with Rozon to his place so he could change his shirt.

"The next thing I knew was that we were in his room, he was on me and I froze," she said. "In my head, the guy that I just met was penetrating me. He met my boyfriend."

Following the allegations, M6, a television channel in France, announced Thursday it was pulling the most recent season of La France a un incroyable talent off the air. Rozon was a member of the judging panel on the show, which is similar to America's Got Talent.

Radio-Canada announced on Twitter that Rozon would "no longer be part" of its show Dans l'œil du dragon.

French-language television station TVA also announced it is taking broadcasts of the Just For Laughs Gala off the air until further notice.

In 1998, Rozon pleaded guilty to sexual assault. He received an unconditional discharge, a decision that angered many women's groups at the time.

Radio-Canada has confirmed that Montreal police have opened an investigation into Rozon for an incident reported to have happened in Paris in 1994.

'We will listen to you,' mayor says

Montreal Mayor Denis Coderre said Rozon sent him a text message Wednesday evening that said he was quitting, presumably from his position as head of the city's 375th anniversary celebrations.

Coderre said he only learned of the scope of what led to his resignation later on.

"I was shocked. I salute the courage of all the women," Coderre said.

Rozon was appointed by former mayor Gérald Tremblay as the head of the city's 375th anniversary celebrations.

However, Coderre sidestepped a question about whether he would have asked Rozon to step down if he had heard about the accusations, saying that decision would be up to the board of directors.

But he said that in this kind of situation, "We would have sent [the board] a message."

Coderre also said it is important that victims feel they can come forward.

"For me, it's imperative that we protect those who have the courage, and saying [you] can take the time that you want, but we will listen to you, we will protect you."

He said the law allows for the presumption of innocence, but at the same time, "we can't defend the indefensible."

Mayoral candidate Valérie Plante released a statement about Rozon on Wednesday night, saying her thoughts were with those making the allegations, and she wants to see justice run its course.

The allegations come after Hollywood producer Harvey Weinstein was also accused of sexual harassment and assault, prompting social media users to flood the internet with their own experiences using the hashtags #metoo and #moiaussi.

Prime Minister Justin Trudeau told reporters during a media availability in Roberval, Que., on Thursday he believes "we're seeing a moment of an awakening."

"It's unacceptable for anyone to feel insecure or harassed at work, at home, in the streets, and I think people are beginning to get it. Mindsets are beginning to change and there is more support for people coming forward and sharing their stories," he said. 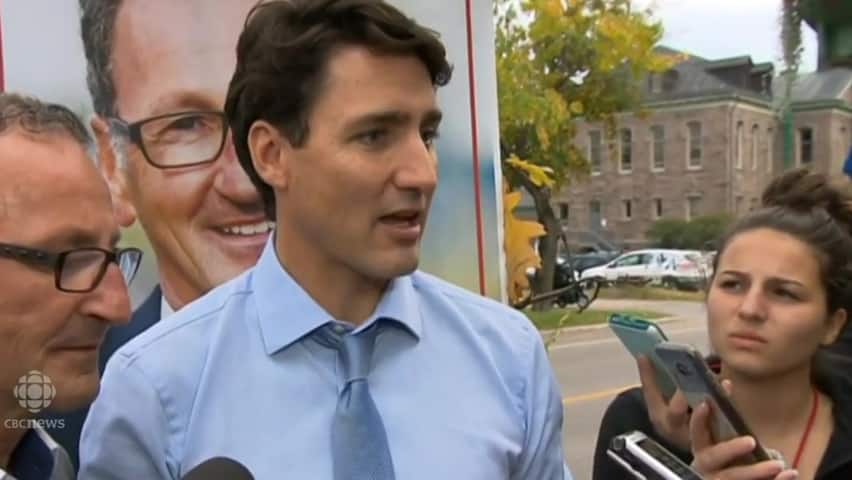 Trudeau says sexual assault and harassment is 'never all right'

Hélène David, Quebec's minister responsible for the status of women, said it appears a global movement has started.

"Something is happening right now in regards to a change in the culture, and we should salute this culture change," she said.

The Quebec media scene was rocked by another scandal involving one of its own on Wednesday.

Montreal's La Presse published a story containing allegations from 11 people who said TV and radio star Éric Salvail either sexually harassed them or they witnessed such behaviour by him.

Montreal police have set up a special hotline, encouraging alleged victims of sexual assault and harassment to come forward.