Diane Savard and her husband had just cleared security at Fort Lauderdale's international airport for their flight home to Montreal when agents yelled 'Alert! Alert!' and the shooting began.

"Everyone started to run, leaving their bags all over the place. People were running over top of luggage that was left and toppled over on the ground. I was getting pushed around. My husband, who was with me, the first thing he said was, 'We'll hide under a chair. If he continues to shoot, at least we'll be protected there,'" she said.

A security guard grabbed the couple and told them to get out and pointed to an emergency exit about 30 metres away.

"He took us out by that door. So we succeeded in getting out," she said.

Savard was speaking to CBC News from an area of the airport where security agents were gathering travellers. They told those assembled that they were safe, but Savard said it was hard to believe.

"We don't know if there is just one, or if there are other shooters."

Just then, screaming erupted around her and a second active shooter situation was announced.

Her phone then went dead.

She texted CBC shortly after to say she was safe.

Police said a suspect was in custody and there was no confirmation of a second shooting at the airport.

Savard and her husband were among the many Canadians awaiting flights out of Fort Lauderdale — or on flights coming into Fort Lauderdale — at the time of today's shooting, which left at least five people dead and injured eight.

An Air Canada spokeswoman said all passengers "are accounted for and safe."

Thankfully all our customers and employees at <a href="https://twitter.com/hashtag/FLL?src=hash">#FLL</a> are reported accounted for and safe. 2/5

"Passengers on our departing flights were safely evacuated on the tarmac and arriving flights 1602 from [Montreal] and 1622 from [Toronto] are being held off gate for the time being," Isabelle Arthur said. 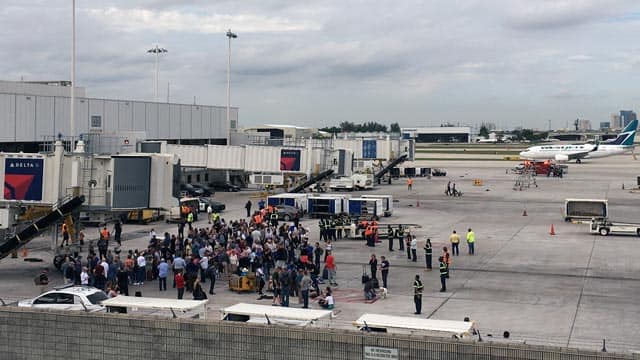 4 years agoVideo
13:41
Interview with Canadian Russel Crooks, who witnessed what happened at firsthand in Fort Lauderdale 13:41

'He was standing there shooting somebody'

Canadian Russel Crooks said he had just returned from a cruise with his partner when the gunman opened fire close by.

"We jumped up and I realized that it was either a bomb or a gunshot, and we ran about five feet away to a desk, a kiosk information booth, and sort of pulled under there," he told CBC.

"He was standing there shooting somebody and I looked away because, quite honestly, I thought that he was going to turn left towards us and he would have seen the people behind this tiny, tiny desk and we were just right there."

Montrealer Fabien Forget was just outside Terminal 2 when a wounded man came out of the baggage claim area accompanied by a woman.

"The man was bleeding quite profusely from his upper right or upper left arm," Forget told CBC News.

"All of a sudden it was just mayhem — a whole bunch of people running out of the terminal on the second level, I guess because they heard the gunshots, and obviously a lot of people panicked at baggage claim, exiting quickly."

Mississauga, Ont., resident Nicolas St-Pierre, his wife, Martine, and their two children, ages two and five, got caught in the rush to get out.

St-Pierre said hundreds of people came stampeding toward them, trying to flee the airport through three doors.

"There was a lady by the gate door screaming that her kid was still in the bathroom, which was very close to where the incident happened," he said. "My five-year-old was clued in a little bit and asked if there was a bad man in the terminal."

St-Pierre and his family were able to get onto the tarmac and were eventually escorted back into the terminal.

Montreal resident Dorothy Montgomery says it was a "miracle" that delayed her Air Canada flight out of Montreal to Fort Lauderdale.

"We were supposed to leave Montreal at eight o'clock but only left around 9:30 a.m.," she said.

"It was a godsend. We would have been probably in the middle of the shooting."

Montgomery had been sitting in the plane for around 30 minutes after its arrival when she spoke with CBC.

"We could see ambulances but we didn't know what it was," she said.

She called her family back in Montreal to say she was safe, but the close call has left her rattled.

"This world is falling apart, I think," she said.

Air Canada said it was rebooking flights for passengers travelling today or tomorrow.

At least four WestJet flights into and out of Fort Lauderdale on Friday were affected and the company said it was implementing its "flexible change/cancel policy."

Global Affairs Canada said it is closely monitoring the situation and that the Consulate General of Canada in Miami is standing by to provide emergency consular assistance.

Email can also be sent to sos@international.gc.ca.

With files from Kalina Laframboise, Sarah Leavitt and Loreen Pindera