Former city of Montreal executive Frank Zampino has been arrested and charged with fraud, conspiracy and breach of trust. 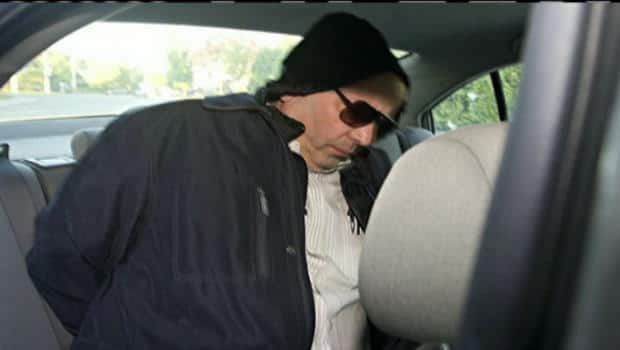 9 years agoVideo
3:14
Frank Zampino was arrested at his St-Leonard home and charged with fraud, conspiracy and breach of trust 3:14

One of Montreal's former top municipal politicians has been charged with fraud, conspiracy and breach of trust.

Investigators allege Frank Zampino, 53, was the mastermind behind a scheme to favour one company in the awarding of a $300 million municipal contract.

Zampino was second in command at city hall behind Mayor Gérald Tremblay before quitting municipal politics in 2008.

He was taken away in handcuffs from his home in Montreal's St-Leonard neighbourhood early Thursday morning.

They say a 2½-year investigation showed Zampino leaked insider information to the company before the call for tenders went out. Police allege he received cash and other favours, including at least one vacation.

Tremblay said he was shaken by Thursday's events.

"These are serious arrests and I hope light will be shed on this as quickly as possible," he said.

"There's no doubt that this affects the credibility of elected officials and, in this case, most acutely, of municipal officials."

In total, nine people were arrested as part of the investigation by the province's anti-corruption unit.

Tremblay made a brief statement Thursday morning after word of the arrests spread, saying only that it's time to let justice take its course and he would have no further comments.

Coun. Richard Bergeron, leader of the opposition party Projet Montreal, said these arrests show the system works and that things are being gradually cleaned up in the city.

Coun. Anie Samson of Vision Montreal said it's a good day for democracy, but a sad day for the state of politics in the city. She said the mayor is going to have to live with whatever allegations may emerge since he handpicks those put in top positions.

She likened Tremblay to the captain of the boat, and said that when the boat sinks, the captain goes down with it.

In total, the anti-corruption unit met with 120 witnesses during the course of the investigation, including Montreal's mayor, Numerous documents were seized.

Tremblay distanced himself from Zampino some time ago.

Zampino entered municipal politics in 1986, winning a municipal council seat before being elected mayor of the former city of Saint-Léonard in 1990.

He was also president of the Montreal Urban Community Transit Corp. for several years.

Zampino was tied to several controversial contracts after he left politics, including a public water meter contract.

He stepped down in 2009 as vice-president of Dessau Incorporated, a Montreal-based engineering company that is part of GÉNIeau, a consortium of businesses that won the lucrative $355-million water meter contract.

The Faubourg Contrecoeur project is a large residential housing development in the city's east end.

In 2007, Montreal's Housing and Development Corporation sold the land to Construction Frank Catania & Associates Inc. for about $4 million even though its market value was $31 million. The sale resulted in a $5-million loss for the city, according to an auditor's report.

The anti-corruption unit was established by Quebec's government in 2011 to co-ordinate investigations in the province.