CBC's Daybreak is live in Pierrefonds-Roxboro this morning. Check out our look at the race which some say will be a referendum on how incumbent Jim Beis handled this spring's flooding.

CBC's Daybreak is live in Pierrefonds-Roxboro this morning looking at issues that matter to people there in the municipal election. Follow @CBCDaybreak for highlights of the broadcast. Here is our profile of the race.

Pierrefonds-Roxboro was hit hard by spring flooding that forced dozens of people from their homes. Now, five months later, the borough's response to the natural disaster has become one of the central issues in the municipal election campaign.

The administration of borough mayor Jim Beis, who is running under the Équipe Denis Coderre banner, came under criticism from residents and businesses both during and after the floods. They've accused him doing too little at the outset to respond to calls for help.

But Beis is adamant the borough did "everything humanly possible" as the waters rose. 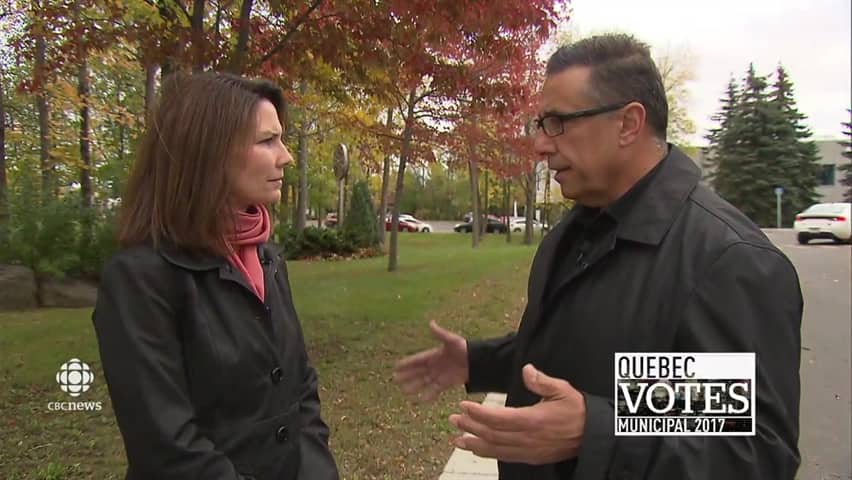 3 years agoVideo
4:06
Come along with Debra Arbec to the West Island, where she meets Pierrefonds-Roxboro's three candidates running for borough mayor. 4:06"Our resources were 100 per cent devoted to the flood victims, to providing security to the community," he said. "Certainly, when you have these types of situations, you also learn from them."

The borough has since taken several steps to bolster its flood protections, including reinforcing existing dikes and building new ones.

He added that the borough has been assessing the chain of command in emergency situations, as well as looking at their crisis preparedness.

Justine McIntyre — who as leader of Vrai Changement pour Montreal is also seeking to become Pierrefonds-Roxboro mayor — said she raised concerns about the city's emergency plan four years ago, when she was first elected to city council.

"I was told 'Don't worry about it, everything's under control,'" she said. "Clearly, we need to be better prepared. We need to stop building on floodplains, and we need to make sure that we have the materials at hand to deal with the emergency when it hits."

McIntyre added that citizen volunteer efforts were not coordinated quickly or effectively by the borough, which could have taken advantage of their assistance.

Projet Montréal's mayoral candidate Hélène Dupont, for her part, argued the borough administration should have already started a larger post-mortem of its flood response, as other boroughs — such as L'Île-Bizard–Sainte-Geneviève— have done.

"They did an assessment of what happened, why it happened, what we can do differently if it happens again," she said of the neighbouring borough.

"You need to put things in place to be ready.... It's about time we do something in Pierrefonds-Roxboro."

Green space and development at l'Anse-a-l'Orme

A proposed residential development in Pierrefonds' west end has also been a flashpoint for tensions this election.

The project would include over 5,000 residential units built in the l'Anse-a-l'Orme Nature Park, which environmental activists say is home to a variety of wildlife.

The project has drawn criticism from not only residents, but also from Montreal's public consultation body, the OCPM, which said the planning process has lacked transparency.

McIntyre said opposing the development is the biggest issue of her campaign.

"People are very upset about the fact that it's been going on behind closed doors, that our last remaining green space is threatened," McIntyre said.

"We understand the importance of preserving these green spaces as kind of a buffer to create resilience in this era of climate change."

​Dupont and Projet Montréal are also opposed to the project, and want to take steps to permanently protect l'Anse-a-l'Orme by turning it into a provincial park.

"We want to preserve the park as it is and regroup it with Cap-St-Jacques and other green spaces to make that provincial," ​Dupont said.

But Beis denied that his administration backed the development project unreseverdely.

"What I've always said is, if this area is ever to be developed, we believe that we can build it not only conserving the most amount of space, but also including sustainable development," he said.

He added that his administration was the one who proposed going to the public consultation body for a second opinion.

All three candidates agree that traffic in the borough was becoming a major issue.

Beis has promised to create a fourth north-south route to help residents get to the highway faster and relieve some of the congestion on the existing roads. However, Beis said that the changes wouldn't just benefit drivers.

"We're also looking at ways of improving reserved bus lanes and having a bikeway system, leading to an eventual light-train stop that would be in Kirkland," he said, referring to the future REM light-rail system planned to go through the West Island.

​McIntyre and Vrai Changement also proposed adding a fourth north-south corridor, but added that better planning of construction and more investment in public transit would also be needed to tackle traffic woes.

"We're not a pie in the sky party," she said. "We understand that what people want is adequate roads and adequate services."

While she acknowledged the problem facing drivers stuck on those routes, Dupont cautioned against looking at the traffic problems as simply a north-south problem.

"Traffic comes from all sides," she said. "It's all on the same system. So it's important to have that global perspective, to look at traffic across the city, and to see what we can do better."

With files from CBC Montreal News at 6's Debra Arbec