For tens of thousands of students enrolled in Quebec's English schools, Monday marked the start of the school year.

Dozens of English schools in Quebec are reopening this week as a handful of French schools in the province deal with the first confirmed cases of COVID-19 among students and staff since classes resumed under new health guidelines.

Schools in both systems are still scrambling to deal with a host of logistical complications brought on by the pandemic. Parents say that's only contributing to their anxiety.

Several families of students in the English Montreal School Board received an email over the weekend informing them of a school bus shortage, forcing parents to make last-minute arrangements for the start of class Monday morning.

"That doesn't reassure me at a time when everyone is stressed out about sending their children back to school in general," said Lora Socciarelli, whose daughter attends Parkdale Elementary.

"Had I known this about a month ago, even a week ago, I would have been able to make alternate arrangements, but right now it leaves me in a very dire predicament."

The EMSB says only one of its contracted bus companies, Transport École Bec Montréal (EBM), is lacking drivers. But 200 special needs students were affected by the lack of drivers on the first day of class.

The board has vowed to find a solution by the end of the week. Due to limited space on buses — 44 spots instead of the typical 72 — the EMSB was already encouraging parents to walk or drive their kids to school if they can.

Though schools across the country are planning to reopen this fall, Quebec is among the only jurisdictions attempting to keep the usual timeline of having students back in class around Labour Day.

Other English school boards in Quebec, including Lester B. Pearson, Eastern Townships and Riverside, will also reopen their schools this week.

Most French schools reopened last week. It emerged Monday that three students at two different high schools in Quebec City tested positive for COVID-19. That prompted more than 80 students to be placed in two-week isolation.

But local public health officials don't believe the three students were infected at school, and are hoping the safety precautions taken will prevent any further spread.

Around 20 teachers at a high school in Deux-Montagnes have been ordered into isolation until Sept. 10 after four co-workers tested positive for the disease.

The possibility of infection was on the minds of many parents Monday as their children returned to school for the first time since they were shut down in March.

"I have this feeling that this year is going to be a continuous back-and-forth, between the kids being allowed to be at school and being home for whatever reason."

Klein said she's disappointed that the school and the EMSB did not show more creativity in responding to the conditions imposed by the pandemic.

"I had this hope that maybe the schools were going to look at doing some outdoor learning or different things like that," she said.

"But I just feel like they didn't really dig deep into what they're doing."

WATCH: What happens if there's a larger outbreak at school? 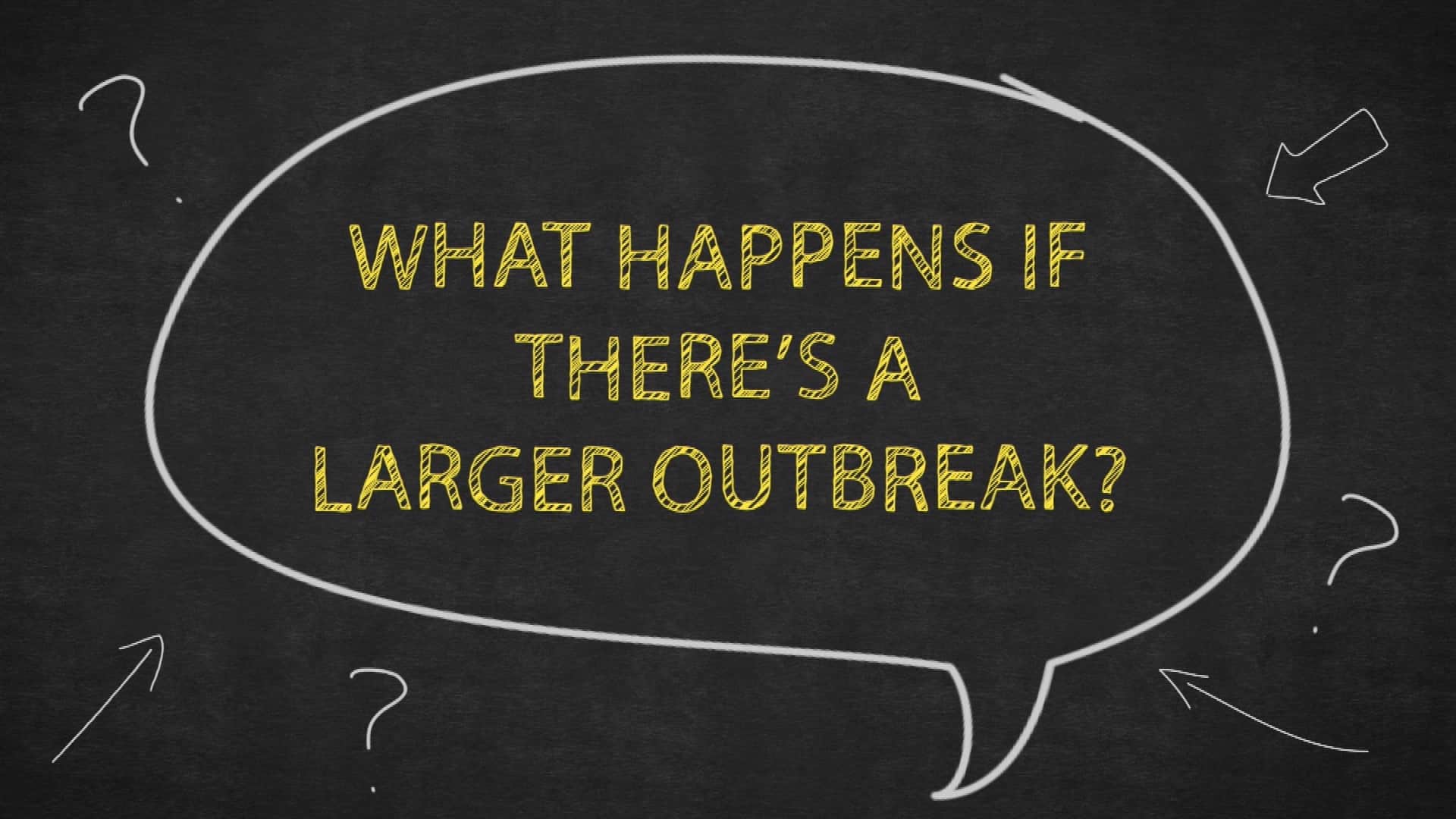 6 months ago
0:54
As thousands of students head back to school, questions and concerns are coming up as to how to deal with a potential outbreak. CBC's Sean Henry explains the government's plan. 0:54

The EMSB says it will closely follow COVID-19 guidelines set out by the provincial government.

In a newsletter to parents, the board says it has ordered medical equipment such as masks, hand sanitizer and disinfectant in "large quantities" for students.

The EMSB says it will not accept donations of personal protective equipment in order to "maintain the control and quality."

For those students who have a doctor's note excusing them from class due to health problems, the EMSB has created a virtual school.

Around 400 students — or one per cent of the student population — have enrolled so far, and will receive between 10 and 15 hours per week of online teaching and two to 7.5 hours of individual work provided by the teacher, all depending on grade level.