Dying with dignity legislation to be tabled at national assembly

The Quebec government is expected to introduce its Dying with Dignity Act at the national assembly between Friday, June 7 and Friday, June 14.

If bill passes, Quebec will be first province to allow doctors to prescribe lethal dose to terminally ill patients 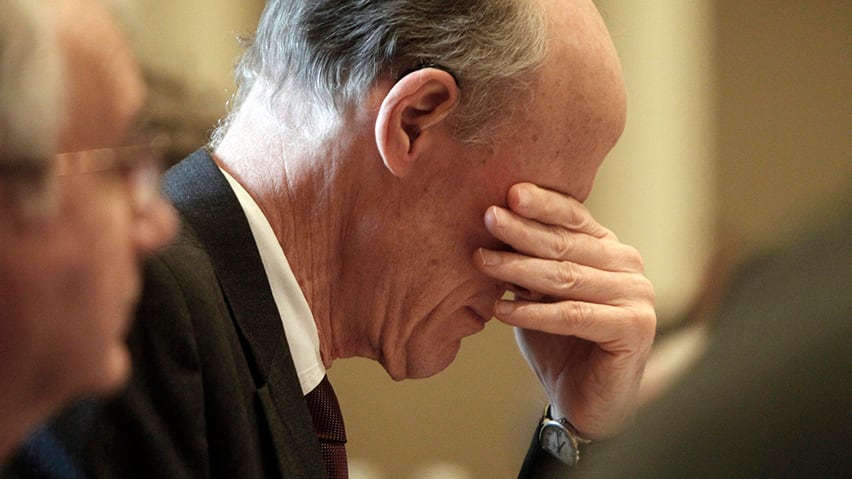 8 years ago
1:08
CBC's Thomas Daigle travelled to Vermont to talk to supporters of legislation passed there recently. 1:08

The Quebec government is expected to table its "dying with dignity" legislation in the coming days.

The law would allow certain forms of medical aid in dying — also called "assisted suicide" by some.

CBC Montreal reporter Thomas Daigle travelled to Vermont earlier this week in the wake of the state’s recent passing of similar legislation.

He spoke to Marnie Wood, who began her fight for end-of-life legislation in Vermont after a loved one died in 2009.

Diagnosed with ALS and living in Oregon, her sister Nancy sought medical help to end her life.

Oregon passed its Death with Dignity Act in 1997, allowing terminally ill Oregonians to end their lives by having a doctor prescribe them a lethal dose of medication.

"I know that she was at peace with her own acceptance of her forthcoming death and the fact that she had been able to choose when it was going to happen," Wood said.

She was thrilled when the law passed in Vermont in late May. It’s the fourth state, behind Oregon, Washington and Montana, to outright permit a terminally ill person to end their life with the help of a doctor.

End-of-life legislation in the U.S.

Eight states moved in early 2013 toward making their own laws, according to the Oregon-based Death With Dignity National Center: Massachusetts, Kansas, Connecticut, Hawaii, Montana, New Hampshire, New Jersey and Vermont.

The laws in Oregon and Washington were voted in by state residents in 1997 and 2008, respectively.

In 2009, the Supreme Court of Montana ruled in a 4-3 decision that a terminally ill person had the right to end their life by ingesting medication prescribed by a physician, and that the physician couldn’t be prosecuted for prescribing it.

But Vermont is the first to pass legislation permitting doctors to knowingly prescribe lethal doses of medications to patients with terminal illnesses seeking to end their lives.

Terminally ill patients who want to die must get approval from two doctors, and make the request for a lethal dose of drugs three times — twice verbally, once in writing in the presence of at least two witnesses over the age of 18.

Still, the law has left hospital officials with many questions.

Dr. Stephen Leffler of Fletcher Allen Health Care in Burlington, said working it out in practice will take some time.

"There are some guidelines within the law. But the real rules and regulations for how this would be done, haven't really been worked out yet," he said.

In a 2012 report, the chair and vice-chair of Quebec’s Committee on Dying with Dignity said "given the large turnout at the hearings, it is clear that Quebecers were ready for this debate and felt it was important."

The committee recommended that the Quebec government amend relevant legislation to "recognize medical aid in dying as appropriate end-of-life care" if the patient seeking it meets certain criteria, including being an adult who is able to consent to treatment under the law.

A group of 500 Quebec doctors opposed the proposed bill, saying that helping patients to commit suicide was not medical treatment.

Dr. Paul Saba is the co-president of the Coalition of Physicians for Social Justice and a vocal opponent of the proposed bill. He says that once a law is past in Quebec, there will be pressure to push patients towards euthanasia — particularly patients who don't have help from their families.

"Patients who don't get the appropriate support, who aren't surrounded, who don't get the medical care and support they need could very well make the decision to end their lives," said Saba. "When a bill is passed, people tend to use the bill, and the government tends to promote it."

Saba says he would not assist or refer any patient who expresses a wish to end his or her life, even if it means facing sanctions from the Quebec College of Physicians.

"This goes against many philosophical and moral codes. This also goes against the medical code," he said. "No matter what the [medical] college does to change the code, it cannot change what is wrong — and this wrong."

The federal government has made it clear it has no intention of changing the law, announcing last summer it would appeal a June ruling by British Columbia’s Supreme Court that partially struck down a ban on assisted suicide.

But Quebec has decided to forge ahead.

In Vermont, doctor and medical ethicist Edward Mahoney pointed out the systems in places where medically-assisted suicide has been legalized aren’t perfect.

"There really are abuses," he said, adding that people aren’t always fully capable, whether mentally or physically, of making the decision on their own.

He also said it compromises the oath doctors take to protect life.

"It certainly raises questions about the physician’s role," Mahoney said.

But for Marnie Wood, whose sister decided to end her life, it’s a matter of personal choice.

"The bottom line, for me, is not just that my sister was able to have what I term a beautiful death," she said.

"I believe every single person should have the right to choose how their life ends."

The Quebec government is expected to introduce its Dying with Dignity Act at the national assembly between Friday, June 7 and Friday, June 14.