For the 584 mainly French-Canadian soldiers of the Fusiliers Mont-Royal, Dieppe was something of a homecoming given the French port's historical ties to Quebec. The events of Aug. 19, 1942, however, would forever alter the town's significance to Canadian history, and the men of the FMR.

For the 584 mainly French-Canadian soldiers of the Fusiliers Mont-Royal, Dieppe was something of a homecoming given the French port's ties to the colonies of New France.

The events of Aug. 19, 1942, however, would forever alter the town's significance to Canadian history, and to the men of the FMR.

At 7 a.m., landing craft carrying the men from the Montreal-based regiment were ordered to reinforce the already decimated Canadian units spearheading the Allied raid on the French port town.

Their wood-hulled vessels were considered fast, but they proved no match for German mortars and machine guns firing from the cliffs overlooking the wide pebbled beach.

In a video recorded by Veterans Affairs Canada, FMR Dieppe survivor Arthur Fraser recalled how the regiment's landing craft approached the centre of the beach together in a line.

He wondered, at the time, if that was such a good idea.

Many of the landing craft carrying the Montreal regiment didn't make it that far, Fraser said, suffering direct hits from mortar shells that sent boat parts and worse flying over him.

It was a grim welcome to Dieppe.

And it was only about to get worse for the Fusiliers Mont-Royal.

'Water was red from the dead'

As soon as his craft hit shallow enough water, the ramp was lowered and Fraser jumped out.

"[The water] wasn't green — it was red," Fraser said. "There was three or four feet of water that was red from the dead in the water."

The FMRs had been told the beach would be cleared by the units in the first wave, but instead it was littered with dead and wounded Canadians and their disabled tanks.

Fraser and his fellow FMRs were also quickly pinned down.

Over the brief four or five hours of battle, 119 FMRs were killed and another 344 taken prisoner. Only 125 made it back to England that afternoon, of whom four died from their wounds.

Fraser died in 2012 and the FMR's last survivor of the Dieppe raid, Donatien Vaillancourt, died on Aug. 11 at the age of 100. Both men were taken prisoner after the raid, but Fraser later managed to escape.

Montreal historian David O'Keefe, who teaches history at Marianopolis College, was hoping to meet with the FMR's Dieppe veterans to discuss his findings on the classified purpose of the raid, but never got the chance.

Based on previously classified "ultra secret" material, O'Keefe's book One Day in August: The Untold Story Behind Canada's Tragedy at Dieppe makes the case that the raid was meant to capture German codebooks and cipher materials.

O'Keefe said the FMRs were ordered in to push the stalled attack through to the harbour and secure it for Royal Marine Commandos tasked with seizing the material.

"Sadly, a lot of [FMR Dieppe veterans] really didn't know just how important their role was."

O'Keefe said the raid remains "an unmitigated disaster" despite its valuable goals, and it merits questions about what he called the "hubris" and  "arrogance" of its Allied planners who thought they could pull it off.

Political fallout in Quebec: 'Thrown away like cannon fodder'

The francophone regiment's role in the raid was initially promoted, and FMR commanding officer Dollard Ménard was turned into a public hero — all in an attempt to stoke pride and support for the war effort in Quebec and stave off critics of conscription.

Such efforts, however, ended up backfiring as the full scope of the disaster emerged.

"It reinforced the feeling among francophones that they were going to be thrown away like cannon fodder," O'Keefe said.

"With the FMR suffering horrifically, and not knowing for 70 years why they were used the way they were used, it certainly reinforced that kind of anti-British and anti-conscription sentiment."

As a result, the contributions of French-Canadian regiments were unfairly downplayed in Quebec, O'Keefe said.

"The way it's been painted is that Quebec opts out of the war, and that's just not true," he said. "The Quebecois and French-Canadians played an instrumental role in the Canadian army, and the Canadian forces as a whole."

Dieppe veterans 'stuck together' after war

"They wanted the operation," he said. "Many suffered, experienced misery, but we can't forget they all enlisted."

Gosselin said the shared suffering and experiences of the FMR's Dieppe veterans created a special bond between them that endured through the decades.

"They stuck together. If they were suffering from shock after the war, nobody at that time understood that," Gosselin said.

The regiment was a kind of shelter for them, and a source of support and even employment for those who had trouble finding work after the war.

Gosselin said FMR officer J. Guy Gauvreau employed many of them at Belmont Park, the amusement park he owned and operated in Montreal's Cartierville neighbourhood.

"They all helped each other … many never worked after Dieppe, either due to wounds or mental illness."

Along with veterans from other Canadian units, they helped found the Dieppe Veterans and Prisoner of War Association to push for special assistance from the federal government.

In 1990, a psychologist hired by the association presented her findings to Parliament that 48 per cent of Dieppe veterans who had been interned as POWs had post-traumatic stress disorder (PTSD) in 1946, but only five per cent received pensions for psychological disabilities.

After their capture, many of the FMR were shackled hand and foot by their German captors for the first two years as punishment for alleged atrocities at Dieppe, O'Keefe noted.

Three pairs of those handcuffs are displayed at the FMR's museum in regiment's drill hall on Pine Avenue, contributed by men who brought them home from the war.

"They became a symbol of both sacrifice and defiance, and also endurance," O'Keefe said.

"That they could endure that kind of treatment and come out on top." 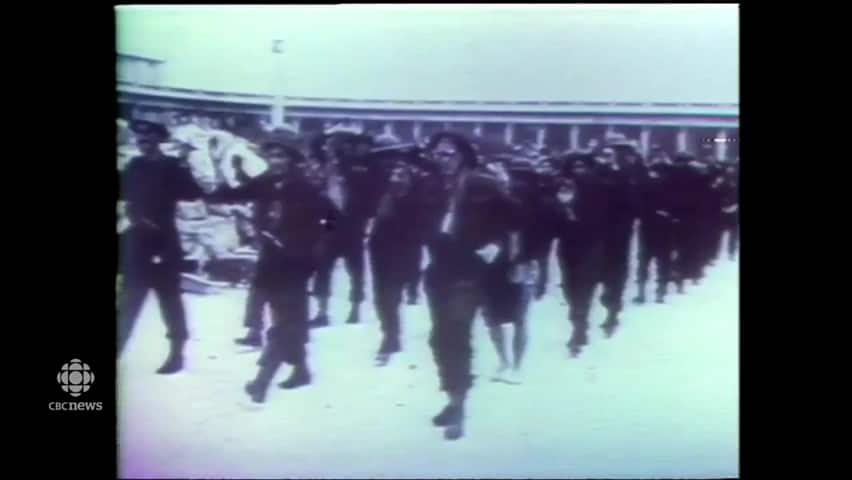 3 years agoVideo
1:22
It has been 75 years since 197 soldiers from the Royal Hamilton Light Infantry were killed on the shores of Dieppe. 1:22
CBC's Journalistic Standards and Practices|About CBC News