The mayor-elect of Montreal, Denis Coderre, said he is ready to get to work on his plan for the first 100 days of his mandate, including installing an inspector-general for the city to act as a corruption watchdog.

Coderre's team plans to ask for recount in Ville-Marie borough 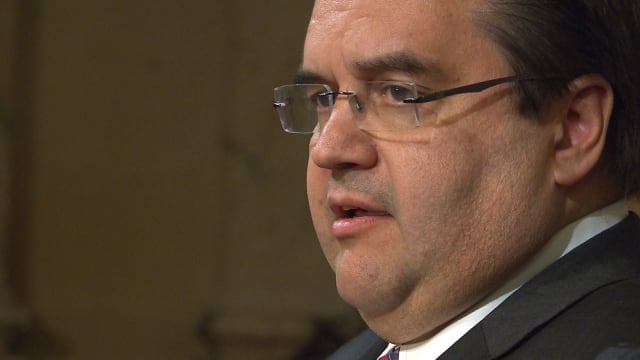 7 years ago
6:02
The day after he was elected, Denis Coderre says he's eager to start his mandate as mayor. 6:02

The mayor-elect of Montreal, Denis Coderre, said he is ready to get to work on his plan for the first 100 days of his mandate, including installing an inspector-general for the city to act as a corruption watchdog.

During his first news conference inside city hall, Coderre listed off a number of elected officials, including Premier Pauline Marois, with whom he has already had conversations since his win.

"In the future weeks, we will meet again and work on some common agenda," Coderre said of the premier.

"We will talk about the first 100 days, because one of the first issues is about my inspector-general. This is a key issue for us to put in place — my anti-collusion, anti-corruption plan."

Coderre, who was a vocal opponent of the province's proposed values charter during the campaign, said he will also address what he called a divisive issue.

"I’m going to relay, but I’m pretty sure that they’re aware, that’s very divisive, very emotional. My job as a mayor is to make sure that we don’t put oil on fire."

Despite failing to secure her own seat, Mélanie Joly, who finished a close second to Coderre in the mayoral race, was quick to remind Montrealers of the need for a strong opposition

"I don't believe that the problem of corruption is solved, and that's why we need important watchdogs,  important people that create a strong opposition," Joly said.

Joly said if Coderre offers one of her four councillors a position on the executive committee, she'll refuse.
While her candidate-designate didn't win, Joly said she wants to secure a seat on council as soon as possible.

After a month of non-stop campaigning, Joly said she's headed off on holiday. However, she said when she gets back, she'll decide if she'll ask one of her councillors to step aside so she can run in a byelection, or if she'll wait for the next vacancy.

Either way, Joly says the strong support she won yesterday has earned her a voice at city hall, and she said that she won't give Coderre an easy ride.

While the mayoral race was called early in the night for Coderre, several other races were so close the ballot counting stretched into Monday.

The Southwest borough was a tight race from the beginning, with incumbent mayor Benoit Dorais of Marcel Côté’s Coalition Montreal and Jason Prince of Projet Montréal duking it out for the borough mayor’s seat.

As it stands, Prince is just 92 votes behind unconfirmed winner Dorais.

All the other seats for borough and city council in the Southwest went to Projet Montréal candidates.

Coderre said his team would ask for a recount in that race.

According to Denis Dion, the spokesman for Quebec’s chief returning officer, anyone can petition a Quebec court judge for a judicial recount — regardless of the size of the difference in votes or whether the person petitioning is from the municipality in question.

Anyone appealing a vote in Sunday’s elections has to do so within four days of the first count.