Cross-country kitty: Meet the Montreal trucker who rides with a cat

If you look closely into the cab of one Montreal big rig on the highway, you might spot a little cat sitting in the passenger seat.

If you look closely into the cab of one Montreal big rig on the highway, you might spot a little cat sitting in the passenger seat.

The cat, named Pouces (which means "thumbs" in French), belongs to Sean Litwack, a trucker who discovered that felines are a terrific cure for the loneliness that comes with spending days alone on the road.

He says Pouces is the "best thing that's ever happened to me."

For six years, the two have travelled Canada's highways together, mostly around Montreal but sometimes as far as British Columbia and Newfoundland.

Litwack says what Pouces offers him is emotional support during the long hours driving. "She's great at reducing stress and anxiety."

Litwack has been driving a truck for seven years. He got into trucking after he started driving an artillery tractor in the Canadian military reserves. He then drove a moving truck for a bit before getting into big rigs.

To make sure Pouces is comfortable, Litwack has outfitted his truck with cat-friendly features.

"Being in the truck for her is kind of like a sanctuary and playground," says Litwack.

On the road, Pouces often sits in the passenger seat, which has been outfitted with a thick cushion so the cat can see over the dashboard.

In the back of the cab, there's a play area with a few toys, a litter box and a tiny closet adorned with clothes Litwack bought online for her.

"I think she looks good in red."

Go along on a ride with Sean Litwack and his cat, Pouces. 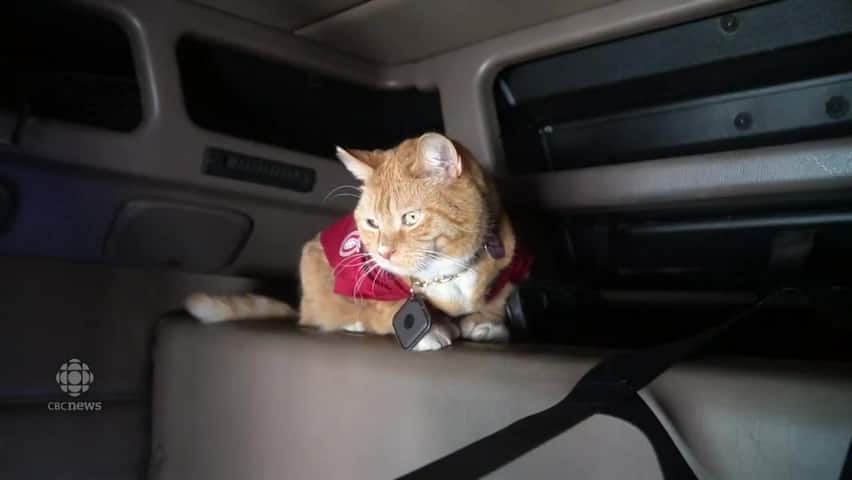 2 years agoVideo
1:24
Meet the Montreal trucker who rides across Canada with his cat, Pouces 1:24

At the start of a journey to the West Island, Pouces stands with her paws on the dashboard as the truck barrels down Highway 20. Then, when she gets bored of the view, Pouces hops into the back cab of the truck, where she has a nap next to a rear window, as Montreal's skyline zooms by.

"Our big rigs have lots of cubby holes to play in and hide and great landscapes to look out at."