The new initiative at the McGill University Health Centre, one of the few of its kind in Canada, is designed to help patients fully recover after they leave the doors of the ICU.

When Gilles Croussette woke up from a coma in the intensive care unit last July, he didn't remember anything about his accident.

Two weeks earlier, the 54-year-old had taken a bad fall on his bike coming down a steep street near his house.

He wasn't wearing a helmet and suffered a serious head injury.

To relieve the swelling on his brain, surgeons at the Montreal General Hospital removed a piece of his skull about the size of a pack of playing cards.

Croussette was lucky to be alive, but the extent of his injuries and the long recovery to come hadn't sunk in yet.

"By the time I realized I couldn't go out, I couldn't walk, I couldn't do anything, that was very traumatizing," said Croussette."I cried the rest of the day. I was so in shock."

After his hospital stay, Croussette was moved to a rehabilitation centre.

He returned home last September and is able to walk again, but still needs therapy to improve his stamina, motor skills and speech.

"Psychologically, that's the hardest part, to realize that it's going to take much more time than I thought," said Croussette.

But he's reassured by the support he's received from the McGill University Health Centre's Critical Illness Recovery Program, one of the few programs of its kind in Canada designed to follow patients and help them heal beyond the doors of the ICU.

WATCH | Gilles Croussette describe the shock of coming to in ICU 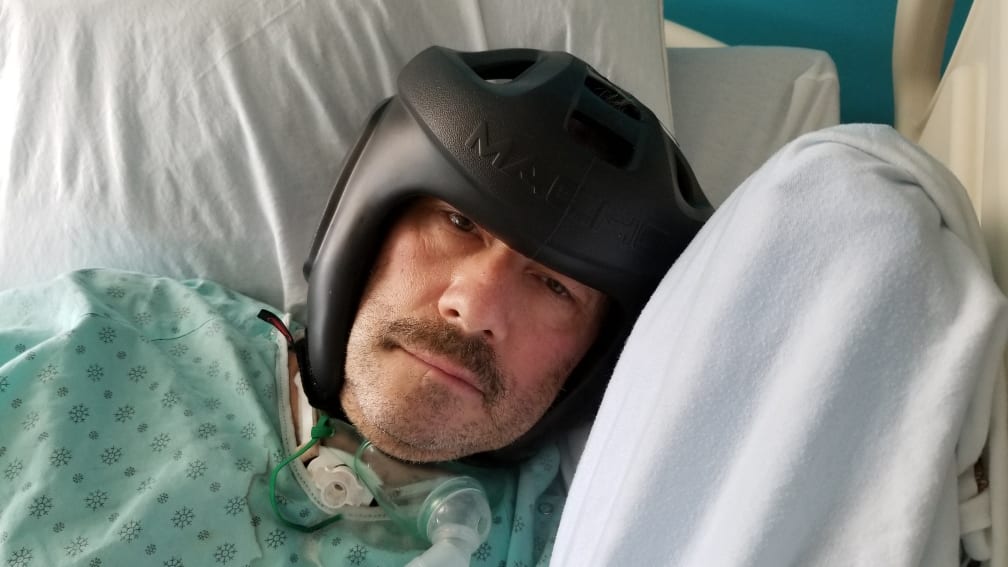 Waking up from a coma and facing a new reality

14 days agoVideo
1:11
Gilles Croussette describes what it was like waking up in hospital after his bike accident and realizing the full extent of his injuries. 1:11

Job not done when patient leaves

Dr. David Hornstein always wondered what happened to patients after they were discharged from the intensive care unit.

"Some of the patients from our institution have been treated through the most harrowing, sometimes violent, profoundly ill periods of their lives," said Hornstein, an internal medicine and intensive care specialist at the Montreal General Hospital.

The road to recovery can be challenging.

Some patients struggle with physical limitations or cognitive impairments. Nightmares, flashbacks, sleep problems and PTSD symptoms are also common in the weeks following an ICU stay.

Hornstein felt medical staff should be doing more to help.

But where to start?

After seeing a story about a post-ICU recovery centre in Nashville, Hornstein cold-called the doctor who ran it and invited her to Montreal to explain how it worked.

It required a shift in thinking: ICU staff generally don't see patients in an outpatient setting.

A space was set aside for the program at the Montreal General and Hornstein assembled a team of ICU doctors, nurses and respiratory therapists as well as a psychologist and pharmacist.

"We felt the people in the ICU — who understand, who work there, who know what it is, who kind of 'get it' — need to be the people to see these patients downstream," said Hornstein, who started the MUHC recovery program in the fall of 2018.

It sees patients from the Montreal General, Royal Victoria and Montreal Chest Hospitals.

The recent cohort of ICU patients includes COVID-19 survivors, but other patients may have experienced a severe illness, trauma or major surgery.

The sweet spot for checking in with a patient is typically about six to eight weeks after they were discharged from the hospital. Like Croussette, they've completed a good part of their rehabilitation and have returned home.

During the assessment  — now done by video due to COVID-19 — any lingering issues, questions or complications are addressed.

If necessary, evaluations by other specialists are arranged. The program team is a call or an email away if any problems persist.

To Hornstein's surprise, one of the most overlooked issues is medication.

Sometimes patients would still be taking drugs prescribed before their ICU stay or weren't on medication they should be.

"We try to liaise with the community physicians and give them the feedback they need to be able to either start or continue to care for these patients who have come through very complicated hospital stays," said Hornstein.

Matti Ollila credits the doctors at the Montreal General for saving his life after his spleen ruptured and was removed in 2018.

When he got home, he focused on getting physically stronger so he could get back to the life he had.

But when Hornstein called him several months later, Ollila realized he'd never really processed what had happened to him.

"There was like an empty spot. I didn't even remember that I had had four surgeries. I thought I had two," said Ollila, whose memories of his time in the ICU were blurry.

He also didn't know why his scars looked the way they did and why there was a hard spot under his sternum.

"I had invented a story in my brain that I thought someone in the hospital had told me, but it turned out to be wrong," said Ollila, who met with his surgical team.

He also sat down with a mental health professional to talk about the disturbing nightmares he had had while unconscious.

"Obviously there's no cave under the hospital where there's heads and conveyor belts," Ollila says now, with a laugh. "You realize that's not real, but there were other things I had mistaken."

Although it sounds like a cliché, Ollila said these meetings helped him get closure.

"I felt really good about everything," said Ollila, who described feeling lighter and exhilarated after the meetings. "I had answers."

Learning is a two-way street

Helping patients come to terms with what they have gone through is a big part of the recovery program.

"People will say, 'Well, I look the same, but I'm not, I'm version 2.0,'" said Hornstein. "God forbid if you've lost an arm or something visible, but if you haven't, the fact you've come through something akin to going through a war zone is very hidden."

Younger people, in particular, often rush back to work, even if they aren't mentally ready.

Inspired by a post-ICU program in Glasgow, Hornstein later added a peer-support component so patients and their families could share their experiences. It too is now done by video conference.

"It's incredible how much nourishment they can get from realizing they're not alone and other people face similar challenges," said Hornstein, who'd like to see a post-ICU recovery program become the standard for any tertiary hospital.

Although the benefits for patients are obvious, their feedback helps the medical staff improve too.

"You have to be conscious of what you are doing," said Bita Danechi, a nurse clinician who supports families in the ICU.

Even something as benign as suddenly turning a semi-conscious patient can be upsetting if the nurse doesn't take the time to gently explain what they are doing first.

Most ICU patients are hooked up to machines and may be on ventilators. To prevent them from pulling out their tubes, they are restrained.

But Danechi says this can cause confusion. Many patients later told staff they didn't understand what they had done wrong.

"Everything you do has an impact on the patient," said Danechi.

Simple gestures such as introducing themselves, saying hi, or letting the patient know what the date is or what the weather is like can help put the patient at ease.

Danechi said it's important to remember the job isn't just technical or a collection of tasks, but that there is a person under all the machines.

"You're doing something good for somebody and this person can go on and be in his son's wedding or they can have a wedding," said Danechi, who keeps a photo album of patients who have recovered.