After three long months of experimentation, ad-hoc consultations and late-night literature reviews, doctors at Montreal's first COVID-designated hospital now have a better grip on what procedures give patients their best shot at survival.

After 3 months of experiments and ad-hoc consultations, ICU team now has a grip on what works, what does not

It was 2:00 a.m. one morning in early March when Dr. Blair Schwartz, an intensive care specialist at Montreal's Jewish General Hospital, got the call he'd been expecting.

Since late January, he'd been researching how to treat severe cases of a new, potentially deadly virus that was circling the globe.

At that point, there had yet to be a reported case in Quebec of this novel coronavirus, and the province's public health officials seemed to be unconcerned.

But staff at the Jewish General figured it was only a matter of time before cases started showing up in Montreal.

As they waited, Schwartz and his colleagues drafted dozens of new protocols. They ordered extra equipment. They rehearsed procedures.

And then came that phone call from an ICU nurse, describing a patient who was struggling to breathe and needed oxygen badly.

"Oh damn," Schwartz thought to himself as he hung up the phone. "It's here."

Driving to the hospital, Schwartz went over intubation protocols in his head.

Schwartz had performed the procedure, which involves sliding a tube into a patient's windpipe, hundreds of times, but never while wearing layers of protective gear.

"I felt like I was an astronaut," he recalled.

The tube slid in easily. Once on the ventilator, the patient's lungs had the breathing support they needed to fight the infection.

That patient survived. But more than 7,900 Canadians, including 5,000 Quebecers, infected with COVID-19 have not.

In the absence of a cure for COVID-19, ICU teams at hospitals across the country have struggled to find ways of keeping patients alive long enough for the disease to run its course.

At the Jewish General, the first designated treatment centre for COVID-19 in the city, it's been three months of experimentation, ad-hoc consultations in hallways, long-distance phone calls and late-night literature reviews.

But doctors there now say they have a better understanding of what procedures give COVID patients their best shot at weathering the storm.

Pablo Gray was part of that first wave of COVID-19 patients to end up in the ICU at the Jewish General.

Gray, a 53-year-old business executive, started feeling ill soon after returning home from a family vacation in the Dominican Republic in early March.

Feverish, with an aching head and profound fatigue, he dragged himself to a clinic on March 9. He was sent to Notre-Dame Hospital by ambulance.

At Notre-Dame, Gray was treated for pneumonia. There were only a handful of confirmed COVID-19 cases in the province at that point, but doctors decided to test Gray for the disease anyway.

When the results came back positive, an ambulance whisked him to the Jewish General so quickly that his shoes were left behind.

The disease was already attacking Gray's lungs. Twenty-four hours after being admitted to the ICU, Gray was put into a medically induced coma, intubated and connected to a ventilator.

In the meantime, the unit's specialists were reaching out to fellow doctors in France and Italy and reading translated papers from China, trying to learn as much as they could.

"In the beginning, we were really shooting blind," Schwartz said. "This is a new disease. There are no world experts in it. A lot of us are learning as we're going."

In those early days, the belief was the disease would move quickly, so patients were placed on a ventilator as soon as possible in order to support their organs.

Once on the ventilator, Gray's condition stabilized, said his wife, Marie-Claude St-Gelais.

The ICU doctors also told St-Gelais they were giving Gray hydroxychloroquine, the controversial anti-malarial drug, hoping it would reduce inflammation in his lungs.

It didn't. The ICU team had to keep ramping up Gray's oxygen supply.

The lowest setting on the machine is 21 per cent, which provides the equivalent amount of oxygen in the air. By the end of his first week in the ICU, Gray was receiving 90 per cent oxygen.

Still connected to a ventilator, Gray was rolled onto his stomach, in the hope that this would increase the amount of air going into his alveoli, the tiny sacs that move oxygen and carbon dioxide between the lungs and the bloodstream.

In theory, getting more air into the lungs would help reduce the inflammation, eventually allowing Gray to once again breathe on his own.

Gray initially responded well to proning. Doctors were able to reduce the oxygen level supplied by the ventilator to 70 per cent, then to 40 per cent.

Then Gray's improvement stalled. The ICU team was unsure what to do next.

On March 20, 11 days after Gray was admitted, a doctor told St-Gelais,"The only way we're going to know if he can breathe on his own is if he can wake up."

For St-Gelais, this was the low point. Since Gray had been admitted, both she and her 18-year-old son had tested positive for COVID-19. The future seemed very uncertain.

As the sedation was reduced, Gray became increasingly agitated, so agitated that he pulled the intubation tube out himself.

He was breathing on his own for the first time in two weeks.

But his breathing remained weak, and he continued to be agitated, in part due to the hallucinations caused by the strong medications he was on.

Nurses would call St-Gelais to get him to calm down. He needed to force himself to keep breathing if he was to survive.

Over the phone, fighting through her own COVID-19 symptoms, St-Gelais told her husband of 20 years, "As soon you're better, we'll come get you and bring you home."

Alternatives to the ventilator

Since that first wave of critical patients, ICU doctors at the hospital have avoided putting COVID-19 patients on ventilators, motivated in part by concerns there would not be enough machines in the province to treat a surge of serious cases.

But there is also emerging evidence that ventilators may not be as effective for treating COVID-19 patients as was originally believed. 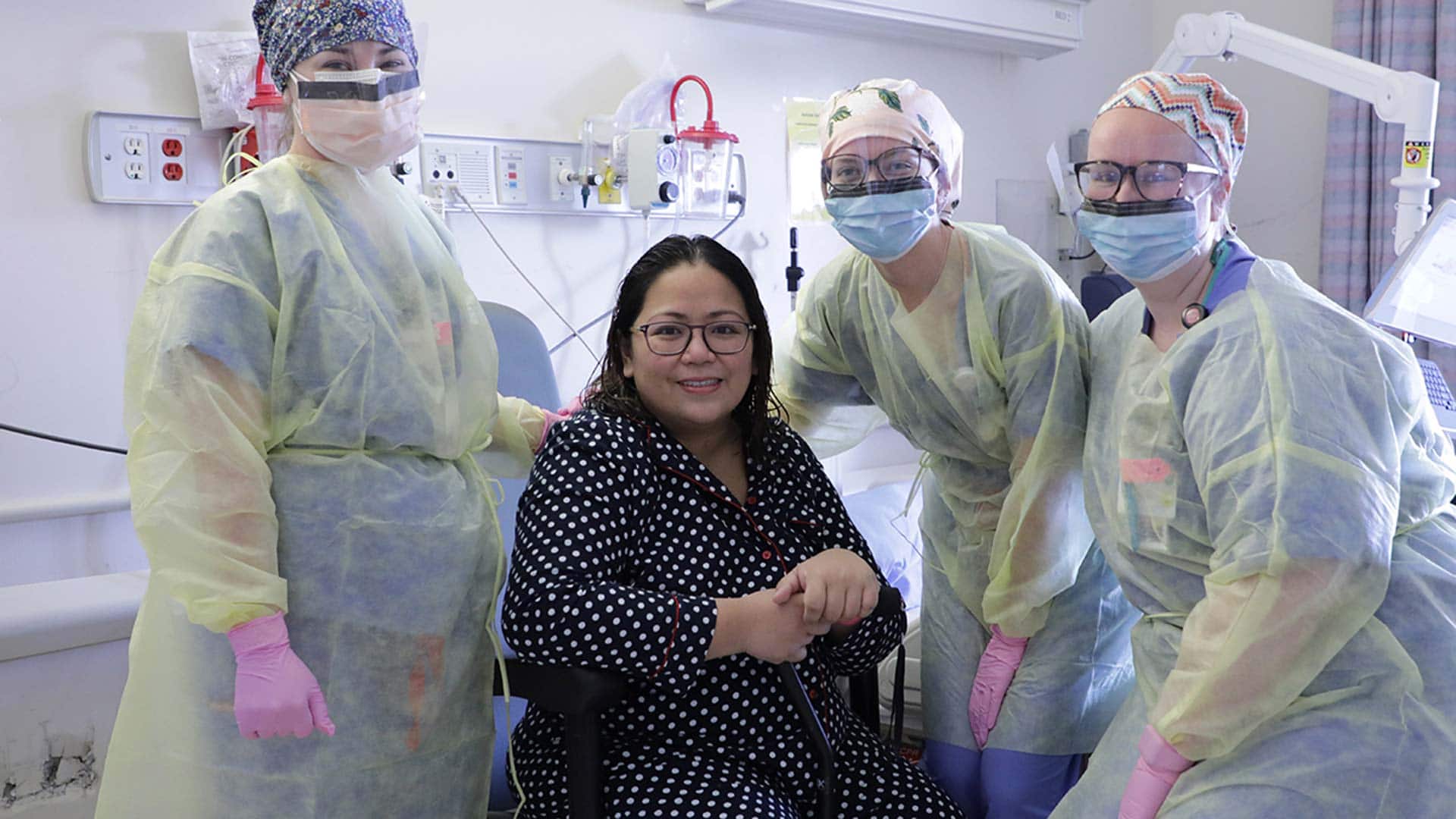 Doctors in New York have reported 80 per cent of COVID-19 patients who go on ventilators die. The Quebec Health Ministry said it doesn't have similar data on hand.

At the Jewish General, Schwartz said, doctors realized that mechanically pumping air into badly infected lungs can exacerbate the inflammation, making it even more difficult for air to enter the chest cavity.

"If you need to go onto the ventilator, and that's what you need to get through this, then so be it," the ICU doctor said. "But we try to avoid that."

"There is a certain cost and a certain harm to going on the ventilator."

The ICU team at the Jewish has instead developed a series of less invasive approaches to support severe COVID cases.

While proning was once reserved for sedated and intubated patients, Schwartz said the ICU team has had success proning patients who are conscious and not on mechanical ventilation.

"It's not a magic bullet," Schwartz said. "But since we've been using steroids, we certainly have had some —anecdotal — very, very nice responses."

One of the other major changes is that patients are now being given high-flow oxygen.

This routine treatment, which involves inserting small tubes into the nose, was avoided early in the outbreak due to concerns hospital staff could be infected by air droplets released by the patient. The ventilator, which filters exhaled air, was considered safer.

But data now shows the transmission risk from high-flow oxygen is minimal, and resuming the procedure has given the ICU team another tool for treating COVID-19 patients.

"We're really learning in real time and thinking on the fly and trying to come up with therapies," Schwartz said.

ICU doctors, he said, aren't fans of formal meetings. But they do consult with each other constantly, be it in hospital hallways or break rooms.

As they puzzle over how to deal with this new illness, they often return to the first principle of medicine.

"Number one, do no harm," Schwartz said. "As much as possible, we'll let these patients ride through their course, and just support them the best we can."

Three weeks after he entered the ICU, Gray took the elevator down to the lobby of the Jewish General Hospital. As promised, St-Gelais was waiting there to take him home.

"Life has been so beautiful after all that," Gray said in a recent interview. He and St-Gelais were driving back to the Jewish General, this time with chocolates for the ICU staff.

"I'm in the process of reconsidering everything — and learning to live life differently."