Premier François Legault says the province now has 3,430 confirmed cases and 25 deaths attributable to COVID-19. "We're facing a long and tough battle," said Legault, announcing all grocery stores will be closed Sundays through April to give workers a rest.

Province has 3,430 confirmed cases, 25 deaths attributable to COVID-19, and 78 people are in intensive care 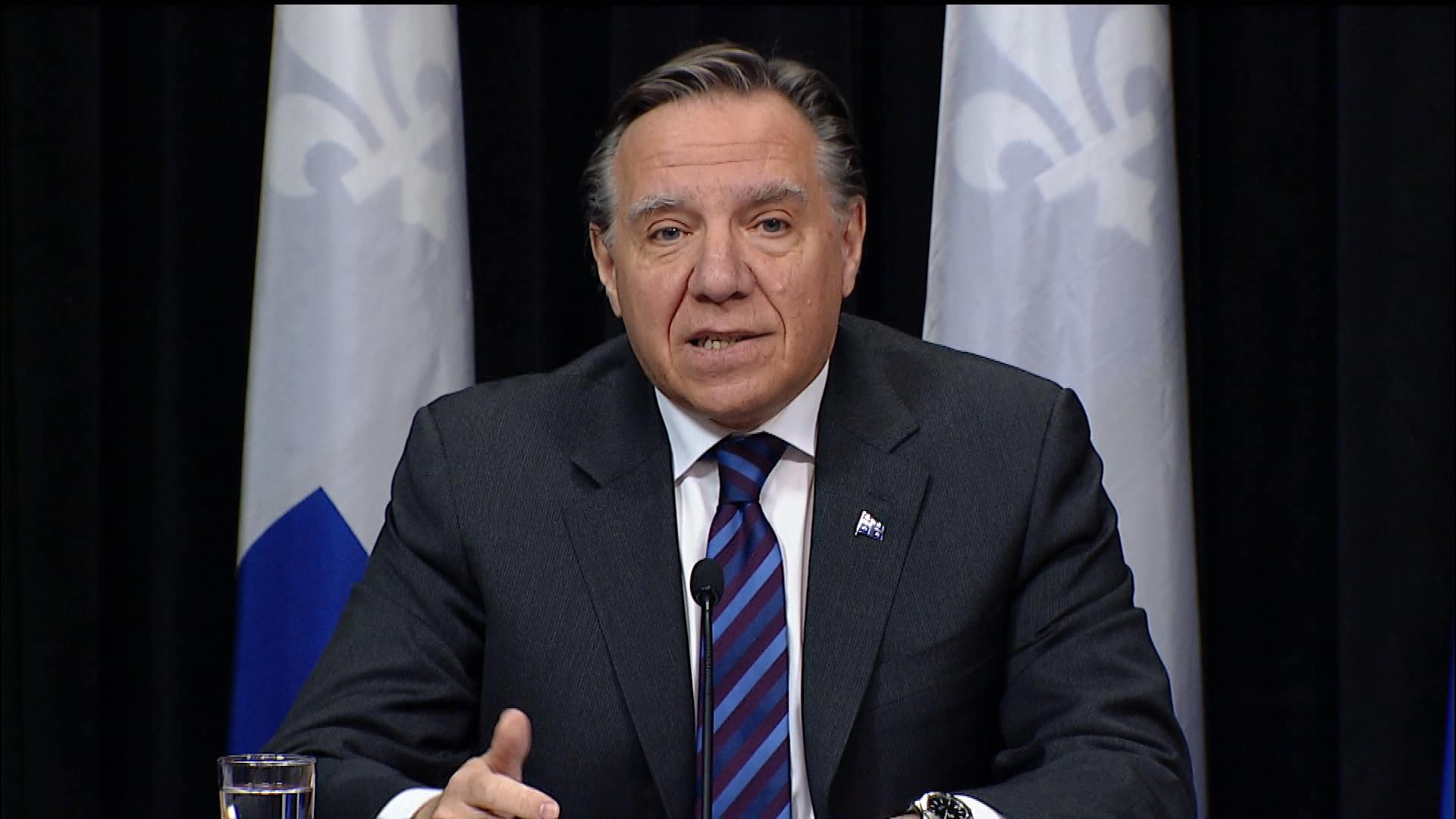 Quebec grocery stores will be closed on Sundays in April

11 months ago
0:41
Premier François Legault announces closure of businesses on Sundays in April to give employees a break. 0:41

Though the overall increase in new cases was large on Monday, the rate of increase was 21 per cent compared to a day earlier, roughly on par with last week's increases.

Hospitalizations are also up — there are now 78 people receiving intensive care — but, again, these figures are growing at rates that authorities believe the health-care system can handle.

"Our health-care system is in control because there remains capacity for what will come next," Legault said at his daily news conference in Quebec City.

Quebec has more than 500 intensive care beds and is readying 500 more by cancelling elective surgeries.

Workers in the system, though, are worried supplies of personal protective equipment are running low, putting them at risk of catching the virus.

Legault acknowledged that the supply of face masks and other protective items is limited in Quebec, but he said every country is confronting the same shortage.

Planning is underway to boost supplies either from orders abroad or by manufacturing the materials in the province.

Legault, along with Health Minister Danielle McCann and Quebec's public health director, Dr. Horacio Arruda, implored everyone in the province to restrict their use of such materials.

"They have to be used at the right place by the right people," McCann said.

Though widely praised so far for its handling of the outbreak, Legault's government is being watched carefully as it addresses working conditions in the public sector.

The collective agreements of 500,000 public-sector employees — including those working in education and health care — are set to expire tomorrow, Tuesday.

Also set to expire are the added premiums paid to thousands of heath-care service providers, including workers at long-term care institutions, which house those most at risk of dying from COVID-19.

Legault declined to go into detail about the negotiations but said he wanted to offer higher salaries for service providers going forward.

"We have to be able to keep our people working in the health-care system for a long time," he said.

More money to protect the elderly

With the three latest deaths announced Monday, a total of 25 people have now died in Quebec from COVID-19. All of them were over the age of 60.

Earlier in the day, the Quebec government announced $133 million in emergency funds for seniors' residences and other institutions or agencies that work with vulnerable groups to help them deal with the COVID-19 pandemic.

"With this emergency aid, we will be able to hire more staff, buy more protective equipment and more disinfectant," said Marguerite Blais, the minister responsible for seniors and informal caregivers.

"We are giving ourselves the means to take better care of our seniors and, above all, better protect them."

Authorities were also moving quickly on Monday to contain outbreaks in other areas of the province where people live and work in close contact with each other.

A Hasidic Jewish community north of Montreal known as Tash was placed under quarantine Sunday after more than dozen members tested positive for COVID-19.

The quarantine was set up in collaboration with community leaders, police and public health officials.

It is believed members of the ultra-Orthodox community caught the virus when they travelled to New York earlier this month to celebrate Purim with other Hasidic communities.

And at two federal corrections facilities in Quebec, prisoners are being confined to their cells because several staff members have come down with the virus.

Correctional Services Canada said nine employees at the maximum security Port Cartier Institution, on Quebec's North Shore, and two at the Joliette prison, northeast of Montreal, have been infected.

Keeping the inmates in their cells will prevent the disease from spreading further, the corrections service said.

Quebec is now entering its third week of imposed physical-distancing measures and other strict public-health directives.

Quebec, along with Ontario, shut down all non-essential economic activity last week. The "pause" is set to last at least until Easter, April 13.

Legault began his news conference Monday noting the toll on mental health that the outbreak has taken on Quebecers, but he made it clear it will be at least several more weeks before society returns to normal.

"If you feel like you're losing control, don't hesitate to call someone," Legault said.

The Health Ministry is in the process of contacting 325,000 Quebecers on file who have mental health issues to see how they are coping, McCann said.

The province will also compel grocery stores to close Sundays in April, Legault said, in order to give exhausted workers a break.

With files from John MacFarlane