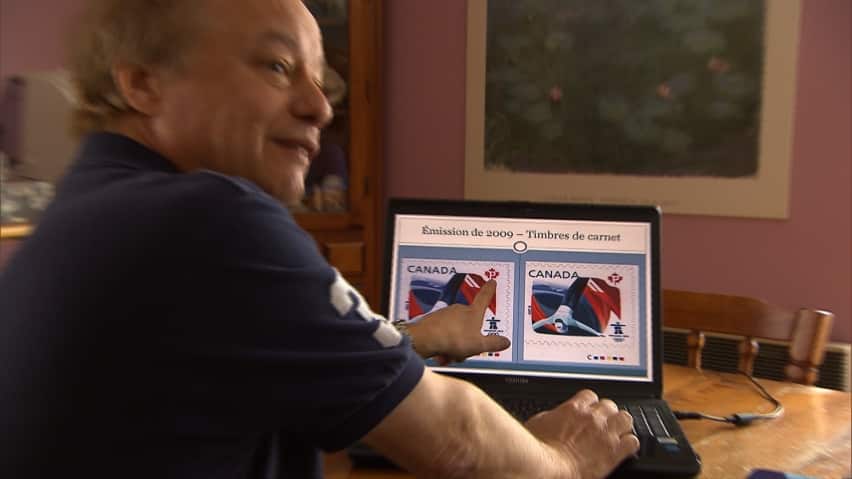 An internationally recognized stamp expert in Montreal says counterfeit stamps are costing Canada Post as much as $10 million annually.

Richard Gratton, the secretary of the Luxembourg-based Fédération Internationale de Philatélie and a consultant to Canada Post, estimates there are between five and 10 million counterfeit stamps used as postage in Canada each year.

He said the move to permanent stamps (with no amount specified), on self-stick paper that is relatively easy for counterfeiters to acquire, has made the temptation too great to resist for skilled printers with a dishonest streak.

"If you make a million booklets, and they're worth $10 a booklet, there's a nice amount of money to be made by counterfeiters," Gratton said.

Fake is returned to sender

Montreal resident Mary Johnson found out she'd innocently purchased a counterfeit pack of 10 stamps from her local convenience store when, three weeks after mailing off a half-dozen thank-you cards, one of them came back to her undelivered.

"It had a big sticker on from Canada Post that said 'insufficient postage,'"Johnson recalls. "'You owe us 48 cents!'"

Annoyed, Johnson took her rejected letter to her local post office, where the clerk told her the stamp on the envelope was a fake.

"I was very surprised to hear that," Johnson said. "I had never heard of such a thing."

To an expert eye with the right equipment, the fakes are easy to spot.

CBC Montreal's investigative unit took the stamps left in Johnson's packet to Gratton, who examined them under ultraviolet light.

The real stamps glowed fluorescent green. The fakes did not.

Gratton says he has seen 32 different counterfeit Canadian stamps, and in 2010, he looked at 27,000 envelopes and found almost one per cent — 0.65 per cent — had been posted with counterfeit stamps.

In 2011, the RCMP arrested five people and seized 40,000 stamps from a network of convenience stores in Montreal and Toronto that were selling counterfeit stamps. A spokesperson for Canada Post said that particular fraud cost them about  $2.6 million.

Since then, Canada Post has hired a team of 80 inspectors to catch counterfeiters.

"Our job as much as possible is to detect, dismantle the network … really go for the big organizations like we did in 2011, because it does have an impact on our business," said Losier.

In fact, while the 2011 arrests were hailed as a major bust, in that case none of the counterfeiters themselves have ever been caught.

Gratton said there have been some cases where Quebec printers were caught and shut down, but these days, it's an international game.

"Lots of countries — Germany, England, France, U.S. — all the big post offices in the world are stuck with that problem," Gratton said.

"The recent issues, we're not sure where [the stamps] comes from. The paper looks like it comes from North America, but we need to study more of these," he adds, with a shrug.  "We hope that Canada Post is using a good paper chemist to look at these things."

However, of the six thank-you cards Mary Johnson mailed, presumably all posted with counterfeit stamps, only one was returned to her.

Both Canada Post and Gratton counsel Canadians to be vigilant and buy their postage stamps through an authorized outlet.

"The victim basically is Canada Post," Gratton said, "but it's also all the postal users, because if Canada Post loses $10 million a year because of counterfeit, guess what? The price of stamps will have to go up.

"We are all paying for this."