Quebec is still not publishing race-based data about COVID-19. These community groups aim to fill the void

Montreal community groups say they will collect data on COVID-19 cases and other impacts of pandemic.

Frustrated by the Quebec government's refusal to collect race-based COVID-19 data, a Montreal entrepreneur and three community groups have decided to take matters into their own hands.

Montreal entrepreneur Thierry Lindor launched a new online platform, dubbed Colors of Covid, Wednesday, hoping to demonstrate how Black and Indigenous communities, as well as people of colour, have been disproportionately affected by COVID-19 in Quebec and across Canada.

Their website will offer a voluntary and anonymous survey.

"I think it's going to paint a clearer picture as to who's suffering," said Lindor.

Lindor himself lost several loved ones to COVID-19 early on in the pandemic. He feels that others could be spared that same suffering if the Quebec and Canadian governments had a better understanding of the statistics and could target resources to certain neighbourhoods and communities.

The Quebec government has not published any race-based data so far. The Health Ministry did not respond to a request for comment Wednesday.

"For us, it was really a question of providing a tool that we feel the government should have been doing for years and should have had the foresight to put in place," said Lindor.

"When the government doesn't act the people should act."

The Federation of Black Canadians, Hoodstock and the Côte-des-Neiges Black Community Association (CDNBCA) have joined forces with Lindor for the project.

For months, local activists, such as Tiffany Callender, executive director of the CDNBCA, have been calling on government authorities to collect race-based data on the novel coronavirus.

Callender was frustrated when she realized the provincial government did not seem to be collecting the information. She sees the impact COVID-19 has had on people of colour through her work every day.

"It was important for myself and our organization to get involved in order to better capture the realities of what our families and seniors and individuals experience during COVID," said Callender.

Data collected by Colors of Covid focuses not only on novel coronavirus infection among Black and Indigenous people, and people of colour, but also on some of the collateral damage inflicted. It will gather statistics, for instance, on food insecurity and job losses, as well as on the state of people's mental health.

In order to make sure people of all financial backgrounds can participate, offline data will also be collected by Montreal community groups on a voluntary and anonymous basis.

While the eventual goal of the website is to collect data across the country, the first phase of the survey will focus largely on Quebec, and especially on Montreal.

"Every single community is going to be able to have personalised reports as to, not what they recommend to be done, what they demand to be done," Lindor said.

Since Lindor himself is not an expert in data collection, Alicia Boatswain-Kyte, an assistant professor at McGill University, helped the group formulate the questions and provided support to make sure their methodology is as accurate as possible.

"It's not in any way less valid than a census survey."

Eventually, if they obtain the funding and authorization, Boatswain-Kyte hopes to take the information collected through the online survey to her team at McGill in order to conduct a more formal analysis of it.

Boatswain-Kyte's past research experience has focused largely on the racial disparities in the child protection system. She hopes to bring that experience with her to this next look at COVID-19.

"What excites me is the ability to be able to get these very precise markers of data that might be showing or indicating a portrait that we were not aware of and to then be able to respond," she said. 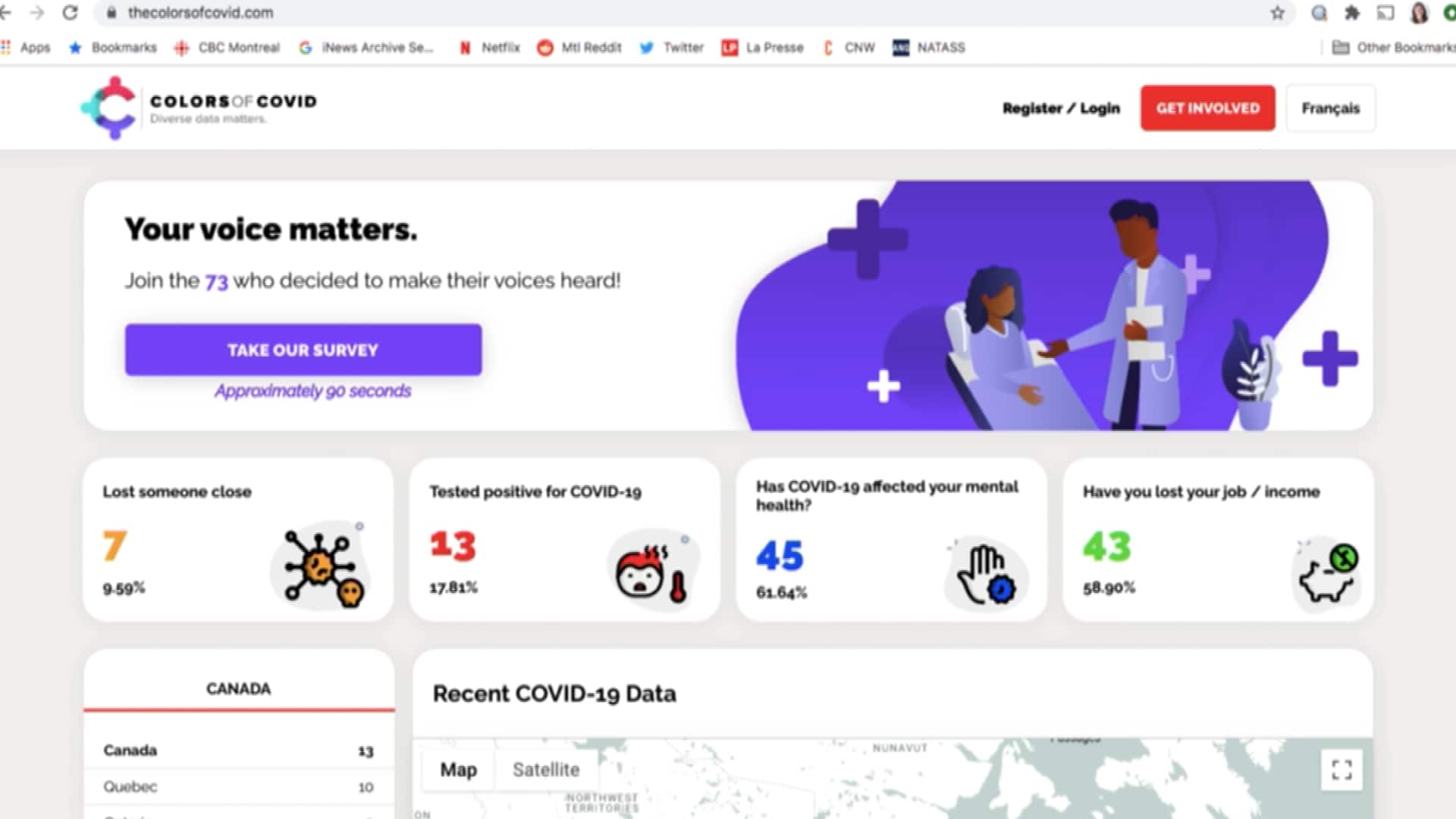 2 months ago
1:38
Fed up with the province still not collecting race-based data, Montreal entrepreneur Thierry Lindor and community advocates have taken matters into their own hands and launched a new online platform, Colors of Covid. 1:38

And it isn't just a Quebec issue. Human rights commissions, activists and health experts have been calling on provincial governments, as well as the federal government, to start collecting race-based COVID-19 data — a practice already in place in the United Kingdom and the United States.

Recent data collected in England showed Black and Asian people are 50 per cent more likely to die from COVID-19.

As for the United States, the COVID Racial Data Tracker recently found that Black people are dying at 2.5 times the rate of white people.

Some Canadian cities have already heeded the calls. The City of Toronto for instance, released race-based data in late July.

Those numbers suggest people of colour make up 83 per cent of Canada's largest city's cases so far. Black people accounted for 21 per cent of reported cases in the city, even though they make up only nine per cent of the population.

The federal government says it relies on reports from the provinces to create its national dataset.

"The case report form is being reviewed and the possibility of adding ethnicity is being discussed" with the provinces, Health Canada said in a statement today. If that happens, the statement noted, it will only apply to cases from this point forward.

Back in June, analysis by CBC News found Montreal's most racially diverse neighbourhoods were hardest-hit by the pandemic.

Of the 24 socio-economic factors tested by CBC News, the strongest correlation was between cases per 100,000 residents and the percentage of Black residents.

And those findings seem to still ring true today.

For example, Montréal-Nord — home to a large Haitian community — is still the borough with the highest per capita case count on the island with 3,143 cases per 100,000 people, as of Aug. 17.

With files from Jaela Bernstien and Alison Northcott