Former U.S. Secretary of State Hillary Clinton and former U.S. president Bill Clinton chatted with people on the streets of North Hatley on Tuesday. The pair both said they found the region beautiful.

The pair shook hands and posed for photos in North Hatley 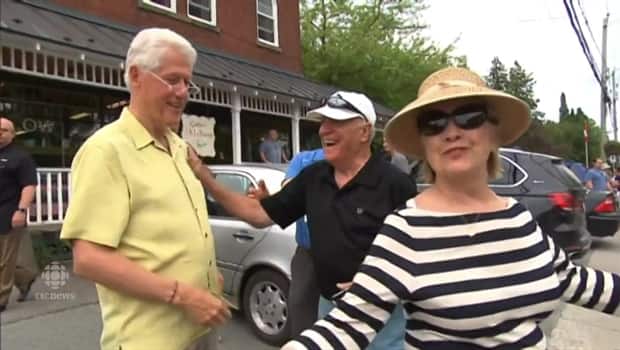 3 years agoVideo
1:57
The Clintons were out and about in North Hatley during their vacation. 1:57

Former U.S. Secretary of State Hillary Clinton and former U.S. president Bill Clinton shook hands and posed for photos with people on the streets of North Hatley in Quebec's Eastern Townships on Tuesday.

The pair, along with their daughter Chelsea and two grandchildren have been staying at Manoir Hovey resort on the shores of Lake Massawippi this week.

"We're having a wonderful time, thank you, it's so beautiful," said Hillary Clinton.

"It's beautiful, very interesting what's developed, what's not. And you know for most people it's a very deep lake, because it's a glacier lake," he said. "These are relatively rare. There are only a few lakes in America as deep as this. It's quite beautiful."

Radio-Canada reporter Marie-Hélène Rousseau asked him if he would be seeing former prime minister Jean Chrétien during his visit.

"I haven't heard back from him, but you know, we're very close friends and I just was with him not too very ago, so I'm hoping he can come and be with me on my birthday," he said.

Clinton said his plans were to do as little as possible on the trip except play with grandchildren and have a good time.

On Tuesday, Clinton strolled outside in North Hatley, stopping to shake hands, while Hillary Clinton browsed in some shops.

He was even drawn into a conversation about the U.S. politics, and emphasized the need for a high voter turnout in the next U.S. election.

"Hillary's in there spending the money," a woman standing on the steps outside a shop teased the former president as he went in an antiques store to find his wife.

"It's a good thing, it's her money too," he quipped back.

Author Louise Penny, who lives in Knowlton, invited the Clintons to the Townships for a visit.

Hillary Clinton has said she is a fan of Penny's murder mysteries, featuring Inspector Gamache, a fictional Sûreté du Québec detective. Penny was spotted with the Clintons on Tuesday.

With files from Marie-Hélène Rousseau