Inside Wuhan: Quebec City woman gets glimpse of life under quarantine in China

Sunny Zeng is in daily contact with her parents in Wuhan. Her father sent her a video of neighbours opening the balcony doors of their high rises and joining together in song, as they try to cope with fear and isolation.

Sunny Zeng has talked to her parents more in the past two weeks than she has in the past 12 months.

The Quebec City resident, who is originally from Wuhan, China, is concerned they could be exposed to the coronavirus in the Chinese city that's been hardest hit by the outbreak.

"When you separate with your original family, you're helpless, in many ways, if they're sick," Zeng told CBC. "My mom is almost 60 years old; my father is almost 70."

Zeng came to Quebec City eight years ago to study at Université Laval. Now a permanent resident, the 33-year-old works as a tour guide and photographer.

When she heard on Jan. 22 that Wuhan was going into lockdown, she suddenly realized the gravity of the situation in her hometown.

She called her parents straight away to check in on them.

"I want to see them. I want to hear them, to make sure they're fine."

So far, neither of Zeng's parents has exhibited any symptoms of the virus, but one of her close friends has been quarantined with his mother.

"My friend was working in another city…. He went back to Wuhan to check if his Mom was OK. Turns out he got the virus," she said. "It's not 100 per cent confirmed — it's like 95 per cent. It took 10 days [for his mother] to get a bed in hospital."

On top of her stress and worry for her parents, Zeng said the quarantine in Wuhan is complicating her life in other ways.

Zeng had planned to take her six-year-old daughter to Wuhan to visit her family in March, but the flights she booked have been cancelled.

"Since I told my parents that my airplane ticket had been cancelled, my mom started to realize it's kind of serious," said Zeng.

Zeng's sister was recently travelling outside of China and is now stranded abroad, unable to do anything but worry about their parents.

"She sends a lot of messages saying, 'Don't go out! Clean your hands. Wear a mask.'"

With public transportation in Wuhan shut down, Zeng said the movements of those living in the city are severely restricted.

Zeng's father has been sending her regular updates of the new reality in Wuhan, sharing photographs of deserted streets and how people are conducting business.

One day, he had to go to the pharmacy to pick up his medication. Since nobody is allowed inside the store, the drugs and money changed hands through a gap between two chained doors.

He sent her a video of people in his neighbourhood opening the balcony doors of their high rises and joining together in song, as they try to cope with fear and isolation.

"I almost cried when I saw this," Zeng said. "They're desperate; they want to go out." 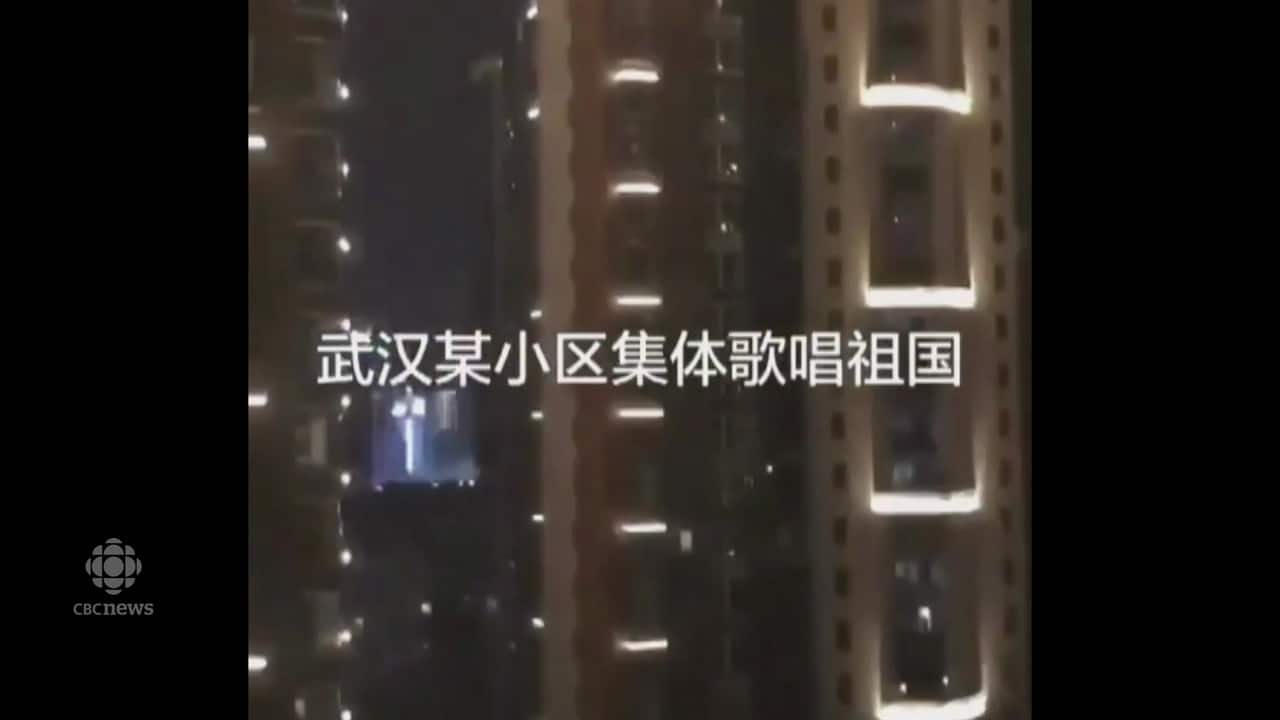 People in Wuhan, China join together in song

12 months agoVideo
0:15
In video captured from a balcony, neighbours can be seen singing together. Video submitted by Sunny Zeng. 0:15

Her parents have told her that the only time people in Wuhan leave their homes is to buy necessities like food and medication. Social interaction is strongly discouraged, and all sorts of public gatherings have been called off.

"Parties, birthdays, weddings, even funerals … annual meetings for companies: they're all cancelled."

"Imagine if you're in a relationship, and you can't even go see your girlfriend. Or see your grandma — you just have to buy them something and leave it at their door. That's how they live."

Zeng said she's doing what she can to encourage her parents. They talk a couple of times a day, arranging a time that works with the 13-hour time difference.

"They're starting to accept the situation. They ask to video chat and see my daughter. This can help console them," she said. "They need people's kind words and our encouragement."