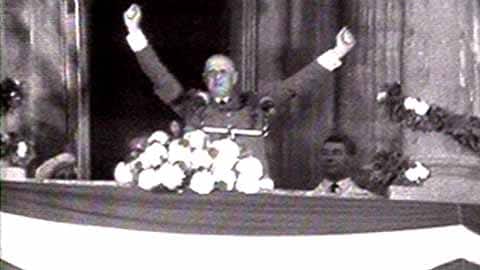 It has been 50 years since four words uttered by then French President Charles de Gaulle gave an international voice to Quebec's burgeoning sovereignist movement and caused a diplomatic incident.

There are a host of events planned across the province to mark July 24, 1967, the day de Gaulle stood on a balcony at Montreal city hall and shouted "Vive le Québec libre!" to a crowd gathered below.

Prime Minister Lester B. Pearson criticized the speech, saying de Gaulle's "statements were unacceptable to the Canadian people." The French president skipped his planned events in Ottawa and returned to France early.

Relations between the two countries remained touchy for years, but the speech left a mark on Quebec society, where the impact of de Gaulle's words lingers.

'A feeling of pride'

The Mouvement national des Québécoises et Québécois, a federation of groups that promote French language and culture, is holding a banquet at the Château Frontenac in Quebec City, a callback to a dinner held there during de Gaulle's trip.

"For the first time, Quebec was cited and recognized on the international scene," she said.

Earlier this spring, the Société Saint-Jean Baptiste de Montreal (SSJB) had to scale back plans to recreate de Gaulle's speech on the famous balcony after a spokesperson for Montreal Mayor Denis Coderre said city hall is "neutral and apolitical."

Nevertheless, the city is holding its own celebration to mark de Gaulle's speech by opening the balcony to the public Monday and offering tours in French and English.

It is also hosting an exhibition of archival documents and photos marking de Gaulle's 1960 and 1967 visits.

One notable person who was inspired by de Gaulle's remarks was René Lévesque, then a high-ranking Liberal member of Quebec's National Assembly.

He wrote a letter to then Premier Jean Lesage not long after the visit, saying de Gaulle's message had provided a "formidable injection of pride," the "best occasion we've ever had to break our isolation."

In November 1967, Lévesque quit the Liberals to pursue his goal of sovereignty. He started the Mouvement souveraineté-association (MSA) and merged it with another nationalist party the following year to form the Parti Québécois.

​Lévesque vaulted the PQ to power in 1976, winning 71 seats out of 110. Since then, there have been two referendums, with the second putting Canada on the brink of breaking up.

But in the most recent provincial election, just the idea of an independent Quebec was enough to cause serious trouble for the PQ.

Observers have argued that the infamous Pierre Karl Péladeau fist pump, when he declared he wanted to make Quebec a country, stirred a referendum threat that may have cost then-leader Pauline Marois the 2014 election.

The Liberals, led by Philippe Couillard, won a majority government. Marois stepped down as leader, beginning a period of tumult for the party.