The Charbonneau commission into corruption in Quebec's construction industry has made 60 recommendations, including protection for whistleblowers, reforms to political donation rules and stiffer penalties for companies and individuals who break the law. 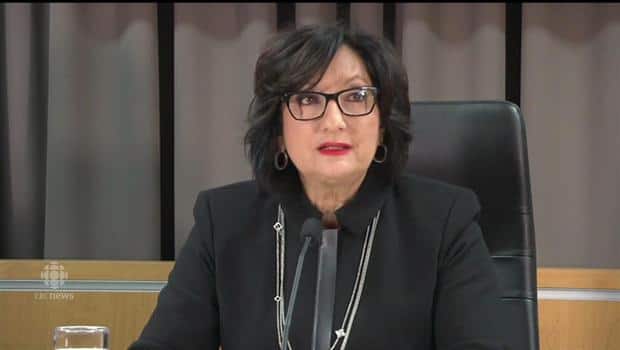 5 years ago
17:17
The report on corruption in Quebec's construction industry issued 60 recommendations for the government. 17:17

The commission charged with investigating corruption in Quebec's construction industry has tabled its report, which includes 60 recommendations, including protection for whistleblowers, reforms to political donation rules and stiffer penalties for companies and individuals who break the law.

The report was delivered to Liberal Premier Philippe Couillard's government today and simultaneously released to the public.

In a prepared address in Montreal, Charbonneau said the commission, which investigated the awarding of government contracts and influence peddling in the construction sector, found that organized crime had indeed infiltrated the industry.

She said the government must do everything it can to put a stop to that and protect the legal economy. She said the impact of allowing it to continue would be devastating long term.

The 1,741-page report contains 60 recommendations for the Quebec government.

Significant sections of the report have been blacked out because of criminal cases currently before the courts.

The public inquiry heard from 291 witnesses over 261 days of testimony — generating 66,000 pages of transcripts.

Charbonneau praised witnesses for their courage in coming forward, singling out some, like a former employee of the FTQ labour federation's construction workers' union, Ken Pereira, who blew the whistle on illegal activities within his own union.

"Whistleblowing must not be seen as an act of betrayal, but as an act of loyalty to society," Charbonneau said.

She said it's difficult, without whistleblower protection, for the province to detect collusion or corruption because it doesn't have the proper tools.

The report calls on the government to improve protection for whistleblowers, including shielding their identities and providing more support for their efforts, as well as providing financial support, when required.

The report recommends enacting a law similar to New York State's False Claims Act, under which companies and individuals who defraud the government may be found liable and whistleblowers are eligible for compensation for their efforts.

The Quebec minister responsible for democratic institutions, Jean-Marc Fournier, told reporters in Quebec City the province will take steps to follow up on the recommendations.

He said the recommendations apply to all political parties, not just the Liberals.

The commission concluded that in the years leading up to 2011, a link existed between political party financing and the granting of subsidies and public contracts, calling the practice deep rooted and systemic.

Lachance wrote that the only pertinent question is whether a political donation led directly to the awarding of a contract.

He said company directors as well as both Liberal and Parti Québécois politicians were all asked that question, and they all answered, "no."

However, Lachance said he ultimately agreed with the recommendations to reform political party financing.

4 years of investigation and testimony

Jean Charest's Liberal government launched the inquiry into corruption in Quebec's construction industry in 2011, in response to mounting pressure, two years after a Radio-Canada investigation into corruption within the province's biggest construction union touched off a media storm.

He said the problems go beyond the Liberals.

"I think it's the political class in general," he said.

He said his government has acted and will continue to act to crack down on corruption.

"The level of vigilance has to remain high," he said.