Candidates face off in first debate for Quebec Liberal leadership

Candidates for the leadership of Quebec's Liberal Party took part in the first of five debates to determine who will succeed Jean Charest as leader. 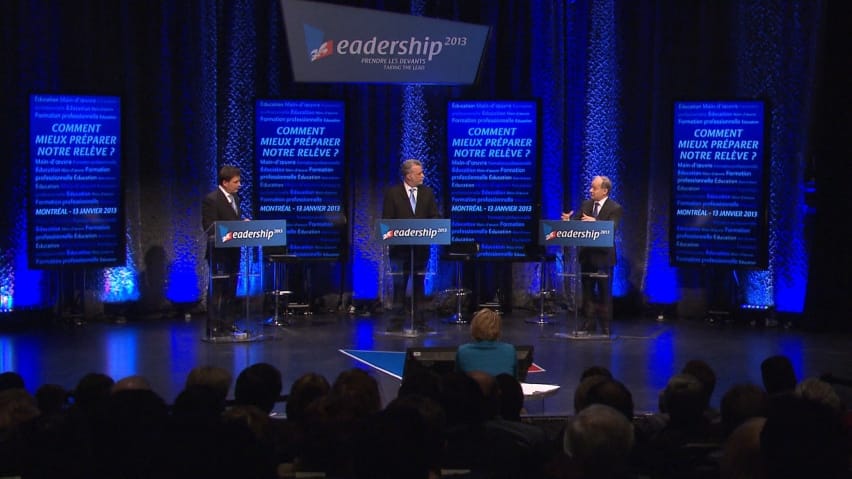 8 years ago
2:00
This is the first of five debates for the Quebec Liberal Party leadership. 2:00

Candidates for the leadership of Quebec's Liberal Party took part in the first of five debates to determine who will succeed Jean Charest as leader.

Jan. 13 — Montreal — How to better form the workers of tomorrow?

Feb. 2 — Rimouski — How to better develop our economy?

The three candidates shared similar views on most topics and spent much time adding to their competitors' ideas.

A look at the student crisis

The first part of the debate focused on post-secondary education and the way the Quebec student crisis was handled by the Liberal Party.

Moreau said the main issues in education are drop-out rates. He also said students should do their part in helping fund universities.

"Financing our universities means we have to involve our students. It's a encouragement to achieve and to earn degrees that will let them perform around the world," he said.

Moreau said he would have preferred if the government had held public forums with students rather than private sessions with student leaders.

Bachand agreed that students should be involved in financing universities through tuition but also discussed the possibility of increasing taxes for wealthier Quebecers.

He said he supported Bill 78, the special law enacted by the Charest government to put an end to the student protests. Bachand said it provided a way for students to return to class.

He also said students should have been allowed to vote on strike actions anonymously online. Bachand says it would have been more democratic for the students. .

Couillard said Bill 78's effect on the academic calendar was useful, but he said the rules put in place to end protests were not essential.

He also said a public forum would have been a better way to discuss postsecondary education issues with students.

Watch the first debate for the Quebec Liberal Party leadership.

During the debate, Moreau said he would like to look at the CEGEP system and reassess its usefulness.

At a news conference after the debate, he said he had no intention of closing down CEGEPs  but feels it is the party's role to look into all educational issues.

Moreau said what distinguished him from his colleagues is his "honest and direct approach."

On the topic of immigration, Moreau said the high demand for qualified workers in the province should take precedence when selecting immigrants.

All three candidates said they did not want to reduce the number of immigrants who settle in the province each year.

The third part of today's debate touched on language issues and the application of Quebec's language law, Bill 101.

All three former ministers agreed they would not make amendments to Bill 101 in order to strengthen it.

"Bilingualism is an essential tool for our youth," said Couillard.

Couillard said it is a Quebecer's responsibility to demand to be served in French if that's what the person wants.

"Despite the fact that we're in a debate, I don't think you will find one when it comes to whether we want to review Bill 101," said Moreau.

The three candidates will be taking part in four other debates between today and Feb. 2.

An English debate will be held on Jan. 26 in Montreal.

After the debates, 3,000 delegates from liberal associations in Quebec's 125 ridings will elect the new Liberal leader at a congress in March.

Votes to select delegates from the various liberal associations will take place between Feb. 4 and March 10.

Each riding will be represented by 12 men and 12 women. A third of the delegates for each riding must be younger than 26.

Jean Charest left his position as leader of Quebec's Liberal Party after his party was defeated by Pauline Marois' Parti Québécois in the election on Sept. 4.

Jean-Marc Fournier has been filling in as interim leader.