Canadian singing superstar Céline Dion is back in Las Vegas for the first time since she halted her career in 2014 to care for her ailing husband René Angélil. 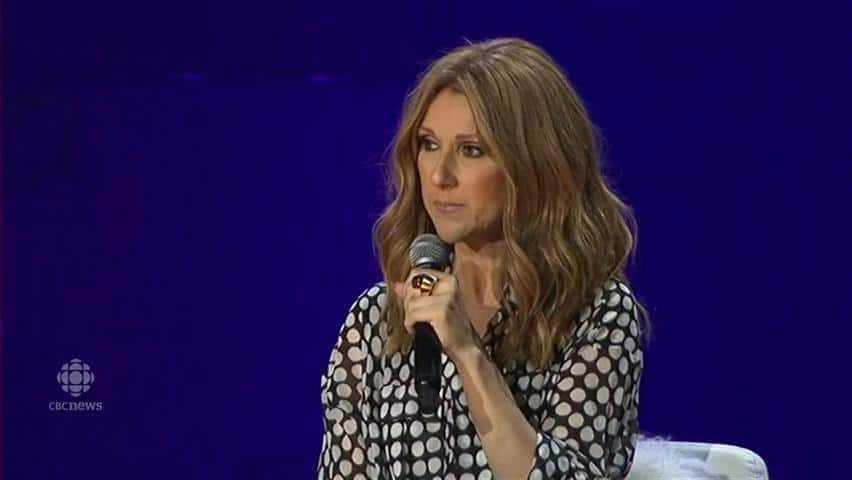 Back to perform in Las Vegas for the first time since taking a year off to care for her ailing husband, Celine Dion says her love songs have taken on a whole new meaning.

"I've been singing them for so long ... but now I mean it," the Quebec singing star told reporters at the Colosseum in Caesars Palace just hours before taking the stage for her revamped show, Celine. "To me they'll become different songs. The words will come alive more than ever before."

The My Heart Will Go On singer put her career on hold in August 2014 after husband Rene Angelil underwent surgery for throat cancer, saying she wanted to "devote every ounce" of her energy to supporting him and their children.

"My three children and wonderful husband wanted me to be here," Dion, 47, said of her return. "I'm not quite sure if I was ready to be here tonight. But we had to commit and say are we doing this or not doing this and we decided together to do this."

Wearing a black-and-white polka dot shirt dress, a relaxed and candid Dion spoke at length about her efforts to create a normal life for the couple's 14-year-old son, Rene Charles, even cracking a joke about his interest in sports.

"He's the only one in the family who has straight teeth and he's becoming a hockey player."

"I'm trying really hard to show my children that sickness and things happen in life and you can not be crying and be depressed and constantly talk about oh my God," the singer added.

Plans to record despite turmoil

Dion said she will continue to record, releasing a new French-language album next year with an English-language follow-up in 2017.

Dion told USA Today earlier this week that Angelil, 73, has told her he wants to die in her arms and has given her detailed instructions for his funeral.

"I think he's passing along his strength to me," Dion said Thursday of her former manager, who she met while still a teen and married in 1994. "He doesn't stop amazing me. When he talks to me, I take notes. This is his time ... and it's going to be the way he wants it to be."

While she didn't give details about her husband's current condition, Dion did send a message to Angelil, who will be watching the show from the couple's home. "Promise me something: Just enjoy. Let it go. I love you."

A five-time Grammy award winner, Dion has drawn hordes of dedicated fans to two of the Strip's longest-running and most successful residencies over the past decade. Celine, her latest show, has grossed a reported $133 million US although Caesars has not confirmed that figure.

She actually opened the Colosseum with her first performance back on March 25, 2003, and has now performed 927 shows there.

She also has shows scheduled for Saturday and Sunday, and will perform multiple dates per month before wrapping Jan. 17.

Representatives for Caesars said the revived show contains a number of changes, including tributes to iconic artists like Elvis and Queen. It will also feature a segment highlighting fan-produced videos of Dion's version of I Drove All Night, the singer announced on her website in June.