The Montreal transit agency says a bus driver who showed support for a protest against Quebec's new religious neutrality law will meet with a superior and could face disciplinary action.

STM driver who honked in support of protesters in Montreal could face consequences, transit agency says

Amélie Régis of the STM said the driver, who has not been identified, will meet with a superior and could face consequences for "inappropriate behaviour."

"We ask our employees to adopt apolitical behaviour," Régis said in an email.

She told CBC that the driver could face suspension but that the sanction handed down would depend on his previous employee record.

The driver was seen and heard honking and covering his face during a protest against the new law, known as Bill 62, on Friday morning. 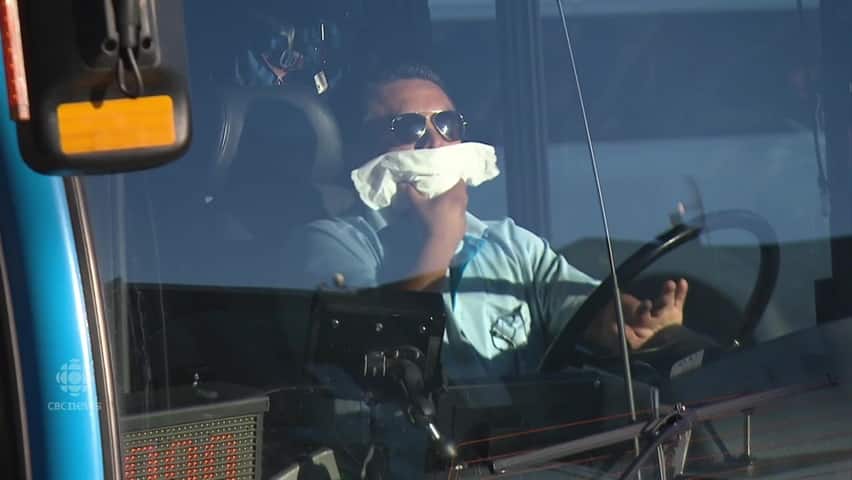 3 years agoVideo
0:26
Montreal protesters donned surgical masks and scarves in a protest over Bill 62 bus restrictions. The new law would force Muslim women who wear a niqab or burka to uncover their faces to take public buses. 0:26

Dozens of protesters wearing surgical masks and scarves lined up along the 80 bus route on Parc Avenue in Montreal to denounce the law, which they say targets Muslim women who wear the niqab.

It also obliges citizens to uncover their faces to receive public services, including when taking public transportation.

The Canadian Union of Public Employees (CUPE) said in a statement that the driver's action was "an individual initiative" but added that "if the STM chooses to meet or sanction the driver, he will be represented and defended by the union."

Kathryn Jezer-Morton, one of the protest organizers, told CBC News "it really seems unfair" that the driver would suffer any consequences for expressing his opinion.

"We're really sad and disappointed to hear that the STM would want to discipline him in any way for just peacefully expressing himself and showing support," she said.

She said several bus drivers seemed to show support for the protest.

The STM, meanwhile, says it is still evaluating the religious neutrality law.

University of Sherbrooke law professor Finn Makela says that drivers working for the Crown corporation are entitled to their opinions.

"Employees aren't robots. They are perfectly entitled to have political opinions and express them," he told CBC.

Makela, who teaches labour law, conceded that while the STM could argue the driver's actions reflected badly on the company, their case may not be very strong.

"Conceivably the STM could say this is harming its reputation, but I don't think anyone thinks the bus driver is expressing the opinion of the STM as a whole."

He says the driver could be echoing the stance of his union, which is that the new law unfairly affects working conditions for drivers who will have to enforce the rules.

"They're going to be on the front lines of applying extremely vague criteria," said Makela.

With files from Sudha Krishnan and Simon Nakonechny