The daring theft of $140,000 worth of corn from a farm in St-Léonard-d'Aston, Que. underscores what a hot commodity corn has become, as prices soar. 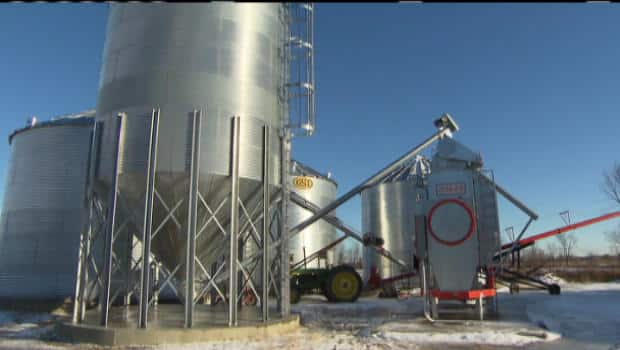 8 years ago
2:32
Quebec provincial police are on the hunt for thieves who managed to get away with close to $140,000 worth of corn from a farm in Saint-Léonard-d'Aston 2:32

Quebec provincial police are on the hunt for thieves who managed to get away with close to $140,000 worth of corn from a farm in Saint-Léonard-d'Aston, 130 kilometres northeast of Montreal.

Farmer Raphael Desjardins said his father made the discovery last Friday, when he arrived at Tri-jardin Farm to find the lock on the gate missing.

He found kernels of corn on the ground, then checked the silos and discovered 465 tonnes of corn missing, along with a small quantity of soybeans.

"We're still without any words," Desjardins said. "We did not think that this could be possible."

The farmer estimates about  it would have taken the thief or thieves five or six hours to cart off that much corn, with a truck making several trips.

To add insult to injury, they had to have used the farm's own specialized equipment to empty the silos.

No one lives close to the silos, but the farm had a security system in place.

However, it appears the thieves cut the power source to the alarm and turned the security camera upside down, to evade detection.

The thieves also appear to have cut through a lock to get to a power source in order to turn on the farm equipment needed to remove the grain.

"We're freaking out," Desjardins said. "We know almost everybody around, and we don't know if this could be somebody [we know.]"

"Usually when you live in rural areas, you have a sense of confidence in people and a sense of security," Van Tassel said.

Quebec provincial police are searching for clues, and Desjardins is still holding out hope the culprits will be caught.

"It's such a big load of grain that we can't imagine this will disappear," he said.

Corn has become a hot commodity, with prices at an all-time high after drought and heat waves last summer left feed in short supply.

Last August, thieves made off with $30 million in maple syrup from Quebec in an even larger agricultural heist.