New Bloc Québécois Leader Mario Beaulieu is already on the defensive just a day into his leadership, standing by contentious comments made during his acceptance speech as two party members threaten to resign over his win. 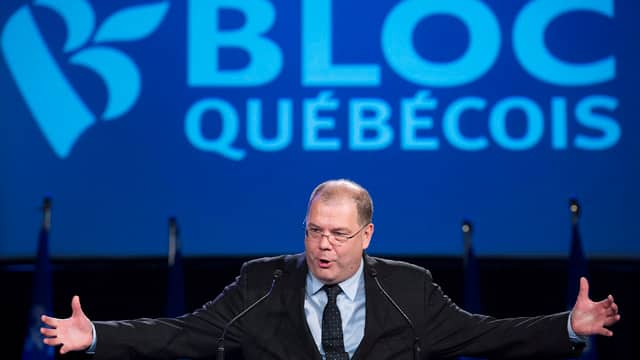 New Bloc Québécois Leader Mario Beaulieu is already on the defensive just a day into his leadership, standing by contentious comments made during his acceptance speech as two party members threaten to resign over his election.

Beaulieu was voted in as leader of the separatist party on Saturday with 53 per cent of the vote.

Beaulieu took the time during his acceptance speech to denigrate the efforts of former Bloc leaders over the past 20 years. He also invoked a phrase, “Nous vaincrons,” closely associated with the FLQ, the group responsible for Quebec’s October Crisis in 1970.

Now he is defending his choice of words.

“'We will conquer, we will win,' there were all kinds of slogans being yelled. I did not make the link between ‘nous vaincrons’ and the FLQ,” Beaulieu said in an interview with Radio-Canada, adding that he does not consider himself to be a radical.

Gilles Duceppe, who was the Bloc leader for 15 years starting in 1990, was incensed by Beaulieu’s comments at Saturday’s party convention.

“I can’t associate myself with people who yell, ‘Nous vaincrons.’ We know what that means. It’s completely irresponsible, unconscionable,” Duceppe said. “It’s not by chanting slogans that we achieve sovereignty; it’s in being determined.”

None of the sitting MPs supported Beaulieu’s run for leader, instead putting their weight behind the only other contender, Richmond-Arthabaska MP André Bellavance.

There are currently four Bloc MPs in Parliament.

Within the first 24 hours of Beaulieu’s leadership, two members of the Bloc voiced their displeasure with his election and vowed to resign.

Jerry Beaudoin, the president of the Hochelaga Bloc association, announced he would quit the party, saying he could not defend Beaulieu’s positions on a number of issues.

He was closely followed by Bruno Grenier, who said he would quit as a Bloc executive committee member and councillor in the federal riding of Laurier-Ste-Marie.

Quebec independence, that has to be fought for in Quebec, not in Ottawa.- Bruno Grenier, ex-Bloc member

Grenier posted a comment on Facebook Sunday announcing his imminent resignation on Monday, saying that he could not fight his own party on following Beaulieu, who he called a "clown."

“Independence will happen through openness or not at all,” Grenier’s comment read. “We have to protect this concept of openness and the inclusion of everyone in our French Quebec.”

He told CBC News on Sunday afternoon that he has been a separatist since he was 15 years old, but was so disappointed with Beaulieu's election he felt he had to leave the party.

He said he disagreed with Beaulieu's statement that the Bloc had accomplished very little over the past two decades.

"I’m not ready to say the Bloc Québécois did nothing over the past 20 years, that it didn’t do its job. The Bloc defended Quebec’s interests. Quebec independence, that has to be fought for in Quebec, not in Ottawa," Grenier said.

Another Bloc member, Marc-André Roche, took to Facebook before the June 14 election, encouraging his fellow members to support Bellavance over Beaulieu.

He said Beaulieu is known to rely on issues around insecurity and language, as well as promote anti-English and anti-Canada sentiment, instead of approaching Quebec sovereignty with a spirit of openness.

“The drama I think took everybody by surprise. This victory, though, less so, in that the only people who are left in that party are the diehard nationalists, the true ardent separatists," Hicks said.

On Saturday, Duceppe said he was offended by Beaulieu’s comments about Bloc leaders from the past 20 years not doing much in the way of pursuing sovereignty.

"[It’s insulting] to me, to Lucien Bouchard, to Michel Gauthier, to Daniel Paillé. [Beaulieu said] all the predecessors lost their time, didn’t do their job,” Duceppe said.

Beaulieu responded to Duceppe’s comments on Sunday, saying that he was not disparaging the work done by former Bloc leaders.

“All I’m saying is, it’s now that we have to bring sovereignty to the forefront, in all of our actions,” Beaulieu said, adding, “Mr. Duceppe was a great leader who accomplished a lot.”

The Bloc lost 45 seats in Parliament in the 2011 federal election.