French artist Céleste Boursier-Mougenot brings his 'living music' to Canada for the first time when the exhibit opens Wednesday at the Montreal Museum of Fine Arts. 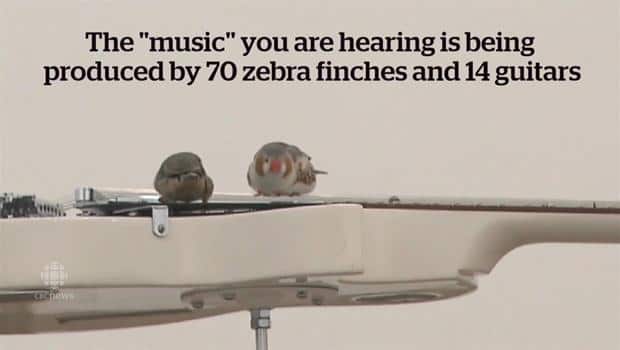 Birds of a feather jam together.

A living musical exhibit at the Montreal Museum of Fine Arts will set 70 zebra finches loose in an aviary, and the only perches are the strings of 14 electric guitars and bass guitars.

When the birds land, they create music that's played through amplifiers stationed around the aviary.

French artist Céleste Boursier-Mougenot calls it living music, inspired by a memory from his childhood.

"Looking through the window, my feeling was that I want to make music from these birds on the wire, and 30 years later I did this," he said.

This is the 19th time Boursier-Mougenot has created this installation. It's travelled to New York, Paris, Milan, and  it's making its Canadian premiere in Montreal.

An early version, shown in Paris, featured sparrows the artist captured himself. They were set free after their 10 day performance.

The stars of the latest exhibit hail from an aviary in Thetford Mines, Que. That's where they'll return when the exhibit wraps up at the end of March.

Visitors walk through the exhibition room in small groups, and are asked to remain calm. They are also part of the musical creation, as the birds react to their presence.

A vet comes in regularly to check on the health of the birds, but they seem to enjoy the gig.

Curator Marie-Eve Beaupré said this is a highly unusual undertaking for a museum.

Every morning, a clean-up crew tidies the room, and the birds get regular visits from a veterinarian to make sure they stay healthy.

This is the 19th time Boursier-Mougenot has created this installation. It's travelled to New York, Paris, Milan, and  it's making its Canadian premiere in Montreal.

A note for the musically savvy: The instruments in the installation are 10 white Gibson Les Paul guitars and four black Gibson Thunderbird basses.