The constitutional challenges to Bill 21 begin on Monday in Quebec Superior Court. At the core of the case are two competing visions of democracy.

Around 9:30 on Monday morning, on the 17th floor of a drab, black and grey building in Montreal, some of the most basic principles of Canadian democracy will go on trial.

That's when lawyers from several civil society groups will begin arguing before a Quebec Superior Court judge that the province's Laicity Act is unconstitutional.

In order to do so, they will be raising a series of questions as fundamental as, what rights do Canadians have? What is the constitution? And what kind of democracy does Canada have?

The Laicity Act, also widely known as Bill 21, prohibits public teachers, police officers, government lawyers and a host of other civil servants — and even some politicians — from wearing religious symbols at work.

According to evidence that will be presented by one of the plaintiffs, the law dashed the career dreams of dozens of Muslim women, cost at least 10 Muslim teachers their jobs and blocked others from getting promotions unless they removed their hijabs.

"What's at stake is the future of a lot of people and whether or not they can work. Freedom of expression, religious freedom, freedom of conscience, our Charter of Rights — I think all that is at stake as well," said Diane Rollert, president of Coalition Inclusion Quebec, a multi-faith group that is one of the plaintiffs in the case.

Lawyers for the Quebec government will argue that Bill 21 was necessary to quell recurring unease in the province about "religious pluralism and the place of religion in the civic space," according to an argument submitted to the court.

They will point out the law was drafted by democratically elected politicians, passed democratically in the Quebec Legislature and continues to enjoy the support of a majority of Quebecers.

"The burden of proof is on the plaintiffs. The government has nothing to prove," said Guillaume Rousseau, a lawyer who advised the government on Bill 21 and who is representing a pro-secularism that has intervenor status.

The case combines four different lawsuits seeking to have Bill 21 (or parts of it) struck down, each for different reasons.

But at the core of the case are two competing visions of democracy.

On one side, represented by supporters of the law, a belief in the legislature's power to respond to, and codify, the will of the people.

And on the other, represented by many critics, is the belief that there are rights so deeply entrenched in Canada's legal history that no legislature, no matter how popular, can do away with them.

The flashpoint for this dispute is the law's use of the notwithstanding clause.

That's a provision in the Charter of Rights and Freedoms that allows legislatures to temporarily override some of the rights laid out in the charter.

In the case against Bill 21, it means the plaintiffs can't appeal to the sections of the charter that protect freedom of religion and equality rights; sections two and 15, respectively.

Instead, some will argue that Canadians have rights beyond just those contained in the charter.

These rights are part of Canada's "constitutional architecture" as a democracy, and include the right to life and equal access to public society.

Another way of putting this argument would be to say: "You can't have a democracy without guaranteeing that people can access public institutions regardless of what religion they belong to."

Bill 21, these groups will argue, goes against that guarantee by forcing people to remove their religious symbols in order to work at certain jobs.

That amounts to an attempt to change the underlying principles of the Canadian constitution, its constitutional architecture, and that's something a province doesn't have the power to do on its own.

The implication is that courts have a duty to block legislatures from violating these basic rights, regardless of the notwithstanding clause. Failing to do so would set a dangerous precedent.

"If this government can tell religious practitioners to find employment elsewhere, then the next government can do the same to atheists, to people of colour, or to members of the LGBTQ+ community," reads the argument plan filed with the court for the original plaintiff, Ichrak Nourel Hak, an education student who wears the hijab.

The Quebec government will counter that the notwithstanding clause cannot be so easily set aside.

According to its argument plan, the government's lawyers will say that the clause is an integral part of Canada's federal system because it protects the autonomy of provincial legislatures.

The National Assembly, the plan reads, is "the privileged site for important social debates and is the organ for expressing popular sovereignty."

As such, it should have the freedom to address Quebec's long-running debate about the public role of religion without interference from either the federal government or the courts.

"Quebec is the best place to decide on the applicable model and to adapt it to its reality given it is a nation with unique characteristics," the court document reads. 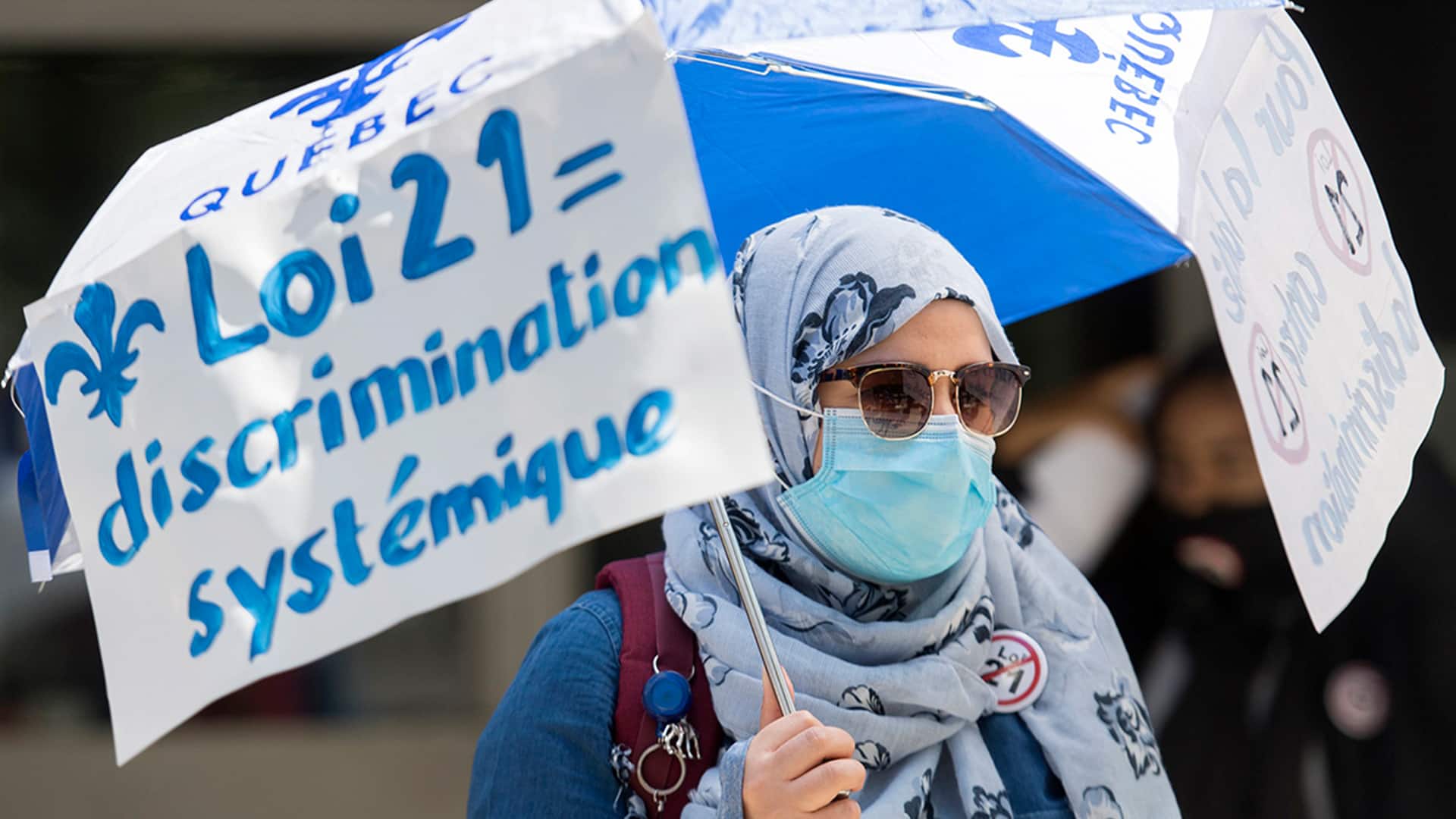 The model it chose, laicity, aligns with the province's unique relationship with religion, which is defined by post-1950s opposition to the Catholic church's influence.

Bill 21 expresses this collective desire to exclude, or radically limit, evidence of religious belief in spaces regulated by the state.

In an effort to establish that this desire is indeed a collective, several paragraphs of the government's argument plan emphasize how popular the law has been according to certain polls.

It expresses a "strong social consensus," is backed by the "vast majority of Quebecers" and enjoys "massive support" because of this opposition to religion, the plan reads.

The trial is expected to last between five and seven weeks, and a decision will likely take several more, if not longer.

But even when a decision does land, it is unlikely to offer more than a temporary answer to the debate over which conception of democracy should hold sway.

Many legal observers believe, sooner or later, the challenges to Bill 21 will end up before the Supreme Court.

Lawyers on both sides sense their arguments could potentially alter how Canadian democracy operates.

"It's hard to predict which cases 50 years from now will be looked upon as very important cases. But there is every indication this is that kind of case," said Eric Mendelsohn, the lawyer representing Coalition Inclusion Quebec.