"We are trying to send a message that it is unacceptable that this law is rendering students in our classes as second-class citizens," one teacher said.

Students and teachers have been reacting with disbelief, says history teacher Robert Green

If passed, the law would prohibit some public workers, including teachers, from wearing a religious symbol such as a hijab, kippa or turban.

"No matter who you are — if you're green, you're blue, you're black, you're white, if you're wearing something on your head or not — you could be whatever you want to be," said student Brendan Schwartz.

"It's good to be a Fruit Loop in a world of Cheerios."

Schwartz was one of dozens standing in front his school protesting a proposed law that would keep his teachers from showing their faith on the job.

Watch: Protesters explain why they're against the bill. 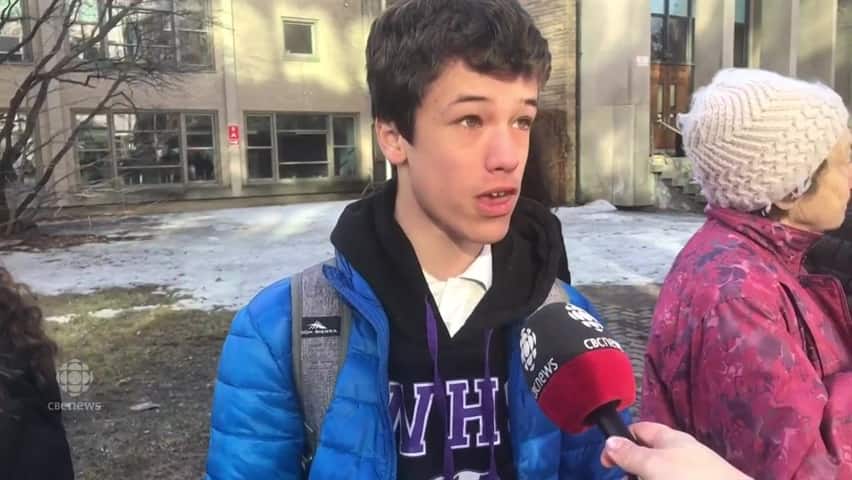 2 years agoVideo
0:45
Watch two WHS students and a teacher explain why they are speaking out against the proposed law. 0:45

Protesters held up signs and chanted, blocking the entrance with a banner that reads, "Our values exclude exclusion."

The 145-year-old school, located on Ste-Catherine Street near Westmount's eastern border with downtown Montreal, aims to celebrate diversity by "creating a more inclusive community," according to its website.

History teacher Robert Green has been encouraging students to take a stand against a law that would ban some public sector workers from wearing religious symbols.

"We are trying to send a message that it is unacceptable that this law is rendering students in our classes as second-class citizens," said Robert Green on CBC Montreal's Daybreak.

The school has plenty of students who show their faith by wearing hijabs or kippahs, he said.

"And the thought that these students cannot become whatever it is that they dream and work hard to become is something that we find to be absolutely unacceptable in a free and democratic society and we want to send a strong message," he said.

There is a teacher at the school who wears a hijab, and while a grandfather clause will allow her to keep her job, she has two daughters that won't be eligible for that legal exception, Green said.

"We should be helping young people, regardless of their background, to dream of whatever future they want to dream of," said Green.

There were also protests to Bill 101, Legault says

"Very few employees" will be affected by the ban on religious symbols as it is directed at people in public positions of authority, he said.

When compared to other countries with similar legislation, he said, "we're very reasonable."

When asked about the protests at Westmount High, he said, "We had the same with Bill 101 at the time. I think it's important that we respect the values of the people without hurting any minorities."

Overall, there has been an outpouring of support for the proposed law, he said.

"I am surprised by the large number of people telling that me they are so happy of our bill," he said. "Every day in the last three-four days, I have got people stopping me and thanking me."

With files from CBC Montreal’s Daybreak and Kate McKenna