With the world at an "inflection point," former U.S. president Barack Obama is stressing the need for citizens everywhere to safeguard the democratic values of the postwar era. 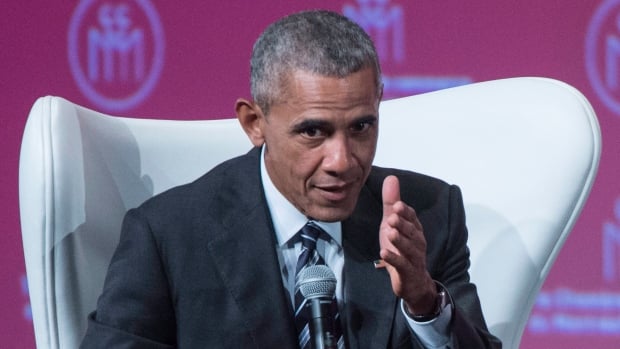 4 years agoVideo
1:02
Barack Obama was in Montreal for his first Canadian speech since he left office. 1:02

It is decision time for a world order based on liberal values, former U.S. president Barack Obama said Tuesday in Montreal, where he issued a rousing call for citizens everywhere to defend its gains.

He suggested that the progress made since the end of the Second World War is threatened by an unwillingness to adapt to social change.

"It's been clear for some time that the world is at an inflection point," he told a crowd of some 6,000 who packed the Palais des Congrés, a downtown convention centre.

At such critical moments in history, he said, there is a temptation "go backwards instead of forwards." The appeal of isolationism and populism, he said, is understandable as people look for certainty in uncertain times.

"But in this time we cannot stand still," Obama said. "We have to act with greater urgency and greater conviction."

The speech carried forward a theme that recurred often in the final months of his presidency, the importance of civic engagement at both the local and international level.

That message has taken on a different, more explicitly political tone, since Donald Trump entered the White House.

Obama did not mention his successor by name, but the context was evident in his references to "fake news," welcoming refugees and championing multilateral organizations such as NATO and the UN.

At one point he even decried the "temporary absence of American leadership" when it comes to climate change.

"The bottom line is: democracy is hard and progress does not always move in a straight line," Obama said. "Its gains are often fragile if we as citizens are not tilling the soil and maintaining that democracy."

In a question-and-answer session following his speech, Obama elaborated on his ​disappointment with the current U.S. administration's decision to withdraw from the Paris climate accords.

But he also stressed that the commitment to fight climate change has reached a critical mass in many sectors of the economy.

Large multinationals such as Walmart, he said, understand its dangers and the savings to be had from adopting more environmentally friendly approaches.

It was Obama's first visit to Canada since leaving office in January. Several leading politicians and business leaders were in the audience on Tuesday, including Quebec Premier Philippe Couillard, Mayor Denis Coderre and several cabinet ministers, both provincial and federal.

Obama laboured through the pronunciation of the francophone names and few pleasantries before acknowledging, "My French is terrible, but it's heartfelt."

The former president has been on a global speaking tour in recent weeks, with stops in Italy, Germany and the U.K.

The event organizer, the Montreal Chamber of Commerce, declined to say how much Obama was paid for his speech. Tickets ranged in price from $57 to $373 and sold out in less than a half hour.

Her speech outlined positions that largely aligned with the values invoked by Obama, advocating for a strident multilateralism that clashes with the America First doctrine preferred by Trump.