Over the past two weeks, as lawmakers in Quebec City parsed over elements of the government’s secularism bill, one question kept coming up: What does the data say?

Over the past two weeks, as lawmakers in Quebec City parsed over elements of the government's secularism bill, one question kept coming up: What does the evidence say?

The draft legislation, which proposes to bar several classes of civil servants from wearing religious symbols at work, has attracted no shortage of criticism.

Opponents say Bill 21 is inapplicable, violates basic rights and will only stoke intolerance. But it is the government's intention to apply the ban to public school teachers that has proved most controversial of all.

At the legislative hearings into the bill, which wrap up today, supporters have argued that teachers can't wear any religious symbol, be it a cross or a hijab, if the state is to be truly secular.

When teachers are allowed to wear religious symbols, says the pro-21 crowd, they are endorsing a religion in front of impressionable young minds.

These religions, they add, don't always respect gender equality — a precious legacy of the separation of church and state during the Quiet Revolution.

"If we don't adopt [Bill 21], we'll remain in a worrying dynamic for the future, that is to say, the progressive re-confessionalization of public schools," Guy Rocher, a 95-year-old sociologist, told the hearings earlier this week.

Rocher's words were weighed heavily by Quebec's media. Rocher is the only surviving member of a landmark public commission in the 1960s that led to the secularization of the province's education system.

The problem, though, is that there appears to be no evidence that public school teachers in Quebec are trying to convert students.

Nor does it appear parents have a problem with the religious symbols that their children's teachers wear at school.

Since the hearings began last week, several teachers unions have testified and submitted documents to the committee. All have opposed the bill.

The Quebec Provincial Association of Teachers, which represents 8,000 teachers, said none of its members who wear a religious symbol has been the subject of a complaint from an employer or a parent.

The Fédération autonome de l'enseignement, a union representing 44,000 teachers, said in its brief that it knows of no member ever having been disciplined for trying to convert a student.

The Centrale des syndicats du Québec, a union representing 125,000 school employees, said it's never been involved in a case of "active proselytizing."

It also filed a document that indicated in 48 school boards across the province, there has been only one complaint about a religious symbol worn by a teacher in the last three years.

"I think what that means is that it's not a problem," the union's president, Sonia Éthier, told legislators.

School boards — also generally opposed to the bill — have come to the hearings with similar findings.

"That's why we were very surprised to see the school system included in this bill," the federation's president, Alain Fortier, testified last Thursday.

Show us the data, critics urge

The opposition parties which plan to vote against the bill — the Liberals and Québec Solidaire — have made a point of highlighting this lack of evidence during the hearings.

They often ask the bill's supporters if they know of any studies that demonstrate religious symbols in the classroom influence the religious beliefs of students. 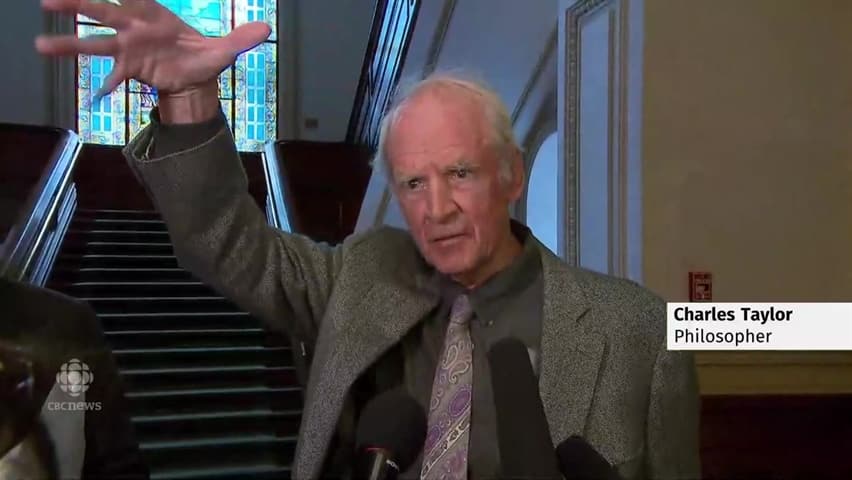 2 years ago
0:59
While Bill 21 does not target one religion specifically, Charles Taylor argues it must be understood in the context of a society "full of Islamophobia." 0:59

The answers they've received can be grouped, loosely, into three categories:

The Analogy: When Nadia El-Mabrouk, a vocal secularism advocate, was asked if there was a link between the hijab and radicalization, she compared religious symbols to advertising.

"Do you need studies to show that the McDonald's hamburger man encourages people to eat more hamburgers?" she said.

The Anecdote: Aware of the criticism about lack of evidence, Immigration Minister Simon Jolin-Barrette invited a former head of a women's rights organization to fill in the gaps.

"It's hearsay, but there are people who say accommodations are being made without anyone knowing about them," said Christiane Pelchat, a lawyer.

She gave the example of a parent insisting their child be taught by a man for religious reasons. "Yes, it's unfortunate; these things were reported to the Conseil du statut de la femme."

The Impossible: Jolin-Barrette also asked Rocher, the esteemed sociologist, about the absence of evidence proving harm is caused by religious symbols in the classroom.

"If no proof exists that's because it is scientifically impossible to produce it," replied Rocher, who is sometimes considered the godfather of modern sociology in Quebec.

But in Rocher's view, the absence of evidence shouldn't dissuade the legislator. "In a state of uncertainty, you have to protect against possible risks."

That may be among the clearest justifications yet given for banning religious symbols in the classroom: it's a pre-emptive strike against the unknown.

In the eyes of its critics, though, the bill is swatting viciously at a threat that doesn't exist.