Firefighters have turned over an investigation to the police arson squad, after the third fire in two years guts a six-storey building on St-Jacques Street in Old Montreal. 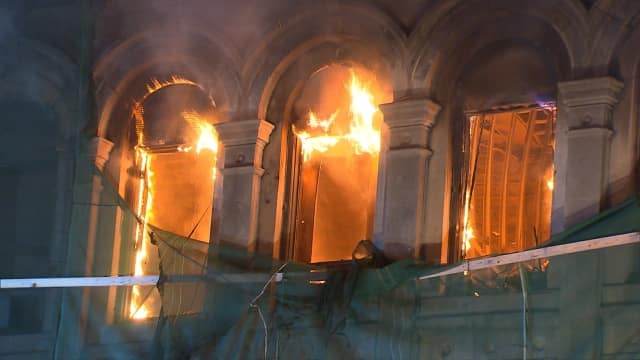 Firefighters have turned over an investigation to the Montreal police arson squad, after the third fire in two years gutted a building at 31 St-Jacques Street in Old Montreal.

The fire began shortly after midnight Friday on an upper floor of the six-storey building, which was under renovation.

"Each floor was open, and all it had was the wood structure," said fire operations chief Ian Ritchie. "Because the fire was on the upper floors, all the ashes and the embers were falling down because of the holes in the floors."

"Slowly, each floor began to burn."

Ritchie said the fire then spread quickly, forcing firefighters to retreat from the building and attack the flames from outside.

The nearby La Presse building was evacuated, although employees have been allowed to return to the job.

It was the second fire in three months and the third since November 2012, which is why the fire department has turned the investigation over to police, Ritchie said.

Damage is estimated in the hundreds of thousands of dollars.

The cause of the fire is still unknown.