When Eric Smith of Ottawa checked his favourite music blog Monday morning, he and his wife jumped in the car for a two-hour drive with a hastily organized destination: a Montreal salsa club. The reason? A surprise concert by Arcade Fire. 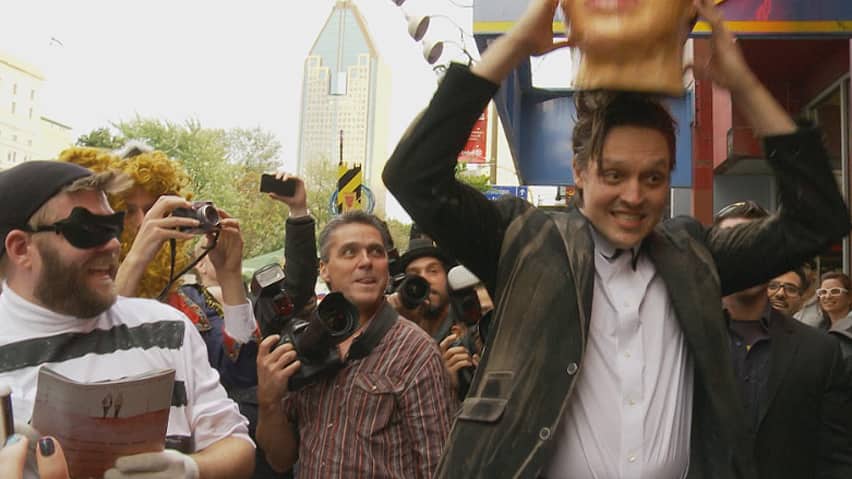 7 years agoVideo
2:52
Arcade Fire shows up in costume at a secret show venue in downtown Montreal. 2:52

When Eric Smith of Ottawa checked his favourite music blog Monday morning, he and his wife jumped in the car for a two-hour drive with a hastily organized destination: a Montreal salsa club.

The reason? A surprise concert by Arcade Fire.

On its website, the Salsatheque club showed the poster for a group called The Reflektors, whose faces were hidden.

By late Monday morning, social media was ablaze with word that a previously unknown band playing a gig in a relatively small salsa club was actually Grammy-award winning Arcade Fire. Reflektor happens to be the name of the single off their upcoming album.

Smith, 31, joined the line of people who rushed to get one of the 100 tickets that were going on sale just before the 9 p.m. show.

But there was a catch: Fans would only be allowed in if they were dressed formally, or wearing a costume.

Smith stood at the front of the line and waited for his wife, who was quickly putting together bank-robber costumes at a nearby park.

An Arcade Fire fan "since the beginning," Smith said he'd seen his favourite group twice but his wife hadn't seen them yet.

"They're by far one of the most important groups in Canada right now," Smith said in an interview Monday outside the club. "When they're together, they're really special."

Lorraine Carpenter, a journalist with Cult Montreal, an alternative arts-scene newspaper, said Arcade Fire started to tease their newest album more than a month ago, using letters spelling out "Reflektor" in the sides of buildings.

She pointed out that it wasn't the first time the group had used another name to promote a secret show.

"They pulled something similar last year when they played a show in Montreal in December as 'Les Identiks' and they used the same poster with the faces blanked out," she said.

Arcade Fire also played a free outdoor show near Montreal before launching its last album, The Suburbs, which went on to win the best-album Grammy.

The eight-minute single and video for the peppy, disco-themed "Reflektor" were already showing up on the web hours before the Montreal show.

Late Monday afternoon, Arcade Fire confirmed the show on its Twitter account. It was part of a marketing campaign steeped in the number "9."

Lillian King, an 18-year-old from Washington, D.C., attending nearby McGill University wasted no time rushing to get in line for a ticket to the show.

"I ran out of class because someone texted me and it was happening down the street — so I ran," she said.

James Lynch, 26, said he heard the single which was leaked this past weekend and was impressed with the backing vocals of David Bowie.

"They reinvent themselves with every album and it's a group that keeps a certain mystery around themselves," he added.

But Lynch said he didn't particularly like all the secrecy.

"It puts an enormous stress on you as a fan when you find out in the morning there's a concert on your way to work and you know there are only 100 places and you have to leave work and find an excuse to give to your boss," he said as he waited in line, dressed as a shiny aluminum warrior.

"But my boss was OK with that and he gave me the rest of the day off."

Sebastian Belisle, a 31-year-old student, is no stranger to Arcade Fire.

The Salsathèque gig would be his 13th concert after taking in other shows by the world-famous group in Montreal, New York City and London.

"It's a group that you have to see live. There's a lot of energy," he said.

The group's fourth album is scheduled to be released Oct. 29.