Nearly 30 years have gone by since Anthony Griffin — an unarmed, 19-year-old black man — was shot and killed by a Montreal police officer, and his closest friends still struggle to accept their loss. Read part one of CBC's look back on a watershed moment in police relations with Montreal's black community.

The series explores how the fatal police shooting galvanized Montreal's black community and led to changes in policing in multiethnic communities.

Here is part one.

Nearly 30 years have gone by since Anthony Griffin — an unarmed, 19-year-old black man — was shot and killed by a Montreal police officer, and his closest friends still struggle to accept their loss.

"What does a taxi ride have to do with him being killed?" said David Perrotte, who attended Chomedey High School with Griffin in Laval. "It didn't make sense."

In the early morning of Nov. 11, 1987, a taxi driver called police. There was a dispute between Griffin and the driver over a $27 fare outside what was then the South Sea Motel on St-Jacques Street in Montreal's Notre-Dame-de-Grâce neighbourhood.

Police ran a check and found there was an outstanding arrest warrant out for someone by the name of Tony Griffin, so they took him in, uncuffed, and drove him to the police station about 10 minutes away.

When the cruiser arrived at the station, police opened the car door and Griffin attempted to flee.

He was ordered to stop or risk being shot. He complied with the order and turned around. 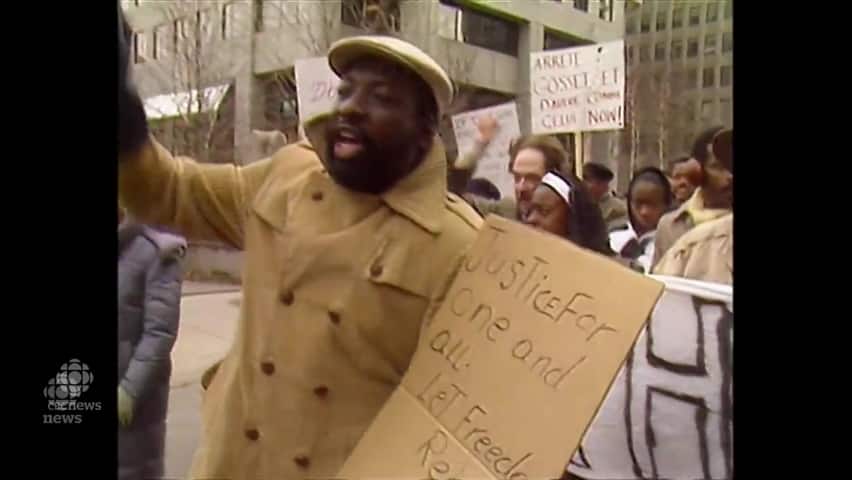 The police shooting that rocked the city

3 years ago
2:23
Thirty years ago, Anthony Griffin was shot and killed by Montreal police in NDG. CBC’s Antoni Nerestant takes a look back at how the death of the 19-year-old unarmed black man affected Montreal’s black community. 2:23

'Why is it this had to happen?'

Gosset said the gun went off by accident, and two juries believed him: he was acquitted twice of manslaughter.

"He probably didn't mean it, but still at the same time, [Griffin] was unarmed," Perrotte said. "Why is it this had to happen?"

"I try not to think about it too much because it's so senseless."

The teen's death sparked outrage in Montreal's black community. The day after Gosset was charged with manslaughter on Nov. 20, thousands marched through the streets of Montreal in protest.

Three days after that protest, in a groundbreaking move, Quebec's human rights commission launched an inquiry into the relationship between police and Montreal's ethnic and visible minorities.

Clean-cut teen who aspired to be a cop

In death, Griffin became a household name, but his friends recalled a clean-cut, quiet teen with a good sense of humour — a kid who answered to his mom.

"I remember laughing a lot with him," said Michael Wraight, a neighbour of Griffin's in Laval's Sainte-Dorothée neighbourhood. "We used to play football together."

"He would not want to go in the areas where he would get his uniform dirty because he knew that as soon as he got home, his mother would give him hell."

Griffin's high school friend Perrotte was accustomed to seeing his friend in another uniform. The two spent several years together in cadets.

"He was interested in the military, in the armed forces," Perrotte recalled. "He did a year at the Black Watch."

Perrotte said Griffin aspired to join the military or become a police officer.

He could be charismatic and persuasive, Perrotte says, recalling a day he and Griffin wanted to catch a movie.

The bus arrived and Perrotte hadn't yet shown up, but his friend had his back — stalling for time, talking to the bus driver while he waited for Perrotte to emerge from his house nearby.

"There is a bus full of people on Saturday waiting to get to wherever, and they're all watching this house waiting for me to come," Perrotte said, laughing.

"Anthony was like that. He was very convincing. He probably said to the bus driver, 'Wait for my friend, he's going to come out in two minutes.'"

When he turned 18, Griffin moved out of his childhood home in Laval to an NDG apartment.

"I think he just wanted to break away and see and experience another part of life," Perrotte recalled. "His maturity was much more than the rest of us … like an old soul."

The media frenzy around Griffin's shooting and the controversy surrounding it made his death even harder on his friends.

To this day, Perrotte keeps newspaper clippings about Griffin's death in his kitchen.

"When you're friends with someone, it's kind of different to know that you know this person who they are talking about on TV," he said. "He was on the news for probably a year."

"I was in complete, utter shock," said Wraight, recalling the moment he heard the news of Griffin's death.

"It just seemed so out of character from when I knew him and when we hung out."

Wraight recalled the protests that followed Griffin's death and says they were needed, although he's not sure if much has changed.

"It's unfortunate that was 30 years ago, and we're still dealing with this stuff," he said, "which has gotten a little bit better, but — I don't know."

Antoni Nerestant is a journalist at CBC Montreal.