An Italian collector of Second World War memorabilia who found a backpack belonging to a Canadian infantryman who fought alongside Allied forces in the Italian campaign became obsessed with finding its owner. Now he has.

Who was P.E.? That question plagued an Italian WW II memorabilia collector for a year

British helmets and German ID tags are typical items in Lorenzo Campus's collection of Second World War memorabilia from Italy, but when he found the backpack of a Canadian soldier, he became obsessed with returning it to the man or his descendants.

Unlike other war memorabilia Campus finds in his native Tuscany, a region in central Italy that includes the cities Florence and Pisa, he felt this bag was special.

He guessed St. Laurent had to be the area the man was from, and P.E., his initials.

Other Italian collectors were enlisted to help research the man's identity and where he may have ended up.

Despite not knowing his name, they were convinced he must have fought in Italy in 1944 and likely survived the war to return home.

What happened to him after that, however, remained a mystery.

WATCH| Italian memorabilia collector explains why it's so important to him to return the backpack. 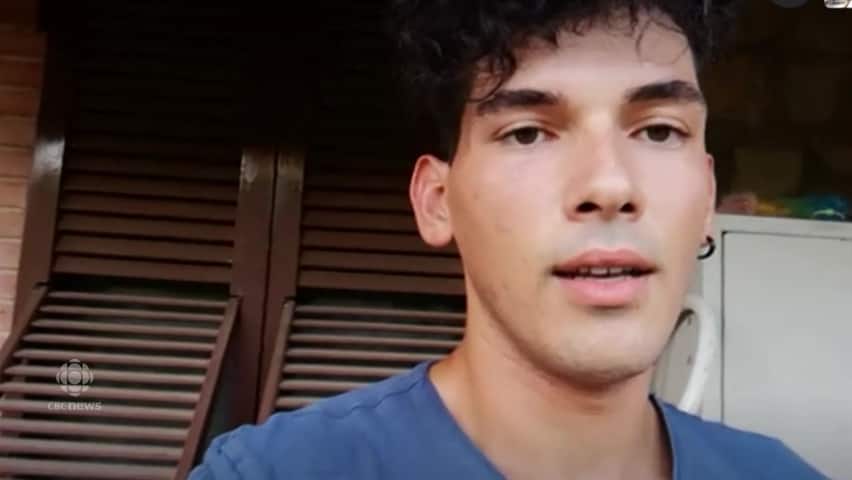 Lorenzo Campus said returning the backpack had special significance to him.

2 years agoVideo
0:28
Lorenzo Campus explains why he wants to return the backpack. 0:28

It's rare to find a piece of war memorabilia that can be traced to a particular soldier, and finding a backpack with clues to a man's identity fuelled Campus's desire to return it to him or his family.

It made the 23-year-old think of his grandfather, who fought in the Second World War as an Alpino — a member of the Italian mountain warfare corps.

"If a collector gave me something of his, I'd be very happy," he said.

Campus initially got the backpack from a fellow collector in August of last year.

Growing frustrated by his year-long quest to find the bag's owner, Campus was ready to give up and send it on to a Canadian museum, so at least it would be back in Canada.

But first, he contacted CBC Montreal for help.

CBC got to work, contacting half a dozen government agencies and military historians.

It was at Library and Archives Canada that we hit the jackpot: The identification number on the pack turned out to have one wrong letter.

However, Campus found another, slightly different, number on the backpack, and that one allowed archivists to quickly identify the soldier as a gunner named Paul-Étienne Saint-Laurent.

Because Saint-Laurent had been dead for more than two decades, Library and Archives Canada was able to release more details of who Saint-Laurent was and what became of him.

Paul-Étienne Saint-Laurent was born in 1919 in Matane, Que., on the south shore of the St. Lawrence River, 400 kilometres northeast of Quebec City.

His father died when he was nine years old, leaving his mother with eight children she couldn't support.

Placed in an orphanage, he went to work at the age of 13.

He enlisted in the war effort in 1941, joining the Royal Canadian Artillery's 57th Light Anti-Aircraft Regiment as a gunner, shooting down German aircraft.

By 1944, he had transferred to the Royal 22nd Regiment, known as le Vingt-deuxième, or, in English, as the Van Doos.

Historian David O'Keefe said that toward the end of the war, gunners like Saint-Laurent weren't as critical to the war effort, since there weren't as many German aircraft left in the skies.

However, on the front lines, the Allied forces had suffered heavy losses and "desperately needed reinforcements," O'Keefe said.

Converted into infantrymen, many gunners fought in the Italian campaign — Allied operations in and around Italy from 1943 to 1945.

As a member of the Van Doos, Saint-Laurent would have faced some of the heaviest combat Canadians have ever seen.

"The fighting in Italy was more like you would have seen on the Western Front in World War One ... extremely muddy, extremely hilly, and extremely difficult," O'Keefe said.

According to records unearthed by Library and Archives Canada, Saint-Laurent returned home in December 1945 and was discharged a month later.

The federal government was offering jobs to veterans, in appreciation of their years of service, and Saint-Laurent accepted a government job, moving to Ottawa. He got married, and his five children were born in Ottawa and Hull, Que.

Saint-Laurent's daughter, Francine Saint-Laurent, who lives in Montreal, was the first in the family to hear about her father's backpack.

"It's like I'm dreaming," she said. "I never heard about this incredible story."

Her father died in 1993, but Francine guesses he would have likely cried to see the backpack again.

Thinking back to her childhood, she remembers finding lilacs far from the family home on a sprawling, rural property and telling her father how much she loved them. Soon after, she said, he found the plant, uprooted it and transplanted it beneath her bedroom window.

"He was a beautiful person," she said.

Her father was always smiling, she said, and playing practical jokes on people.

He rarely spoke about the war, but when he did it was in the most positive terms he could muster: describing the beautiful cities he got to see and the friends he'd made.

She remembered him mentioning little asides and basic facts — like that he'd served in Italy and France — but that's about it.

"He lost some friends, and it was very hard for him," she said.

"He told me once he saw a young boy, dying — the same age as him, around 21. The last word he said was 'Mama,'" Francine recalled.

Now, in place of the stories about the Van Doos, the family has the backpack, which will be passed down through the generations, she said.

After learning about it Thursday, Francine contacted Campus to express her family's appreciation.

"It would have been easier for him to throw it in the garbage," she said.

Luckily, if anyone would keep it out of the trash it would be Campus, who plans on writing a book about the young soldiers who fought in Tuscany during the Second World War.

Campus is overjoyed to know the family has been found, and he can send them a piece of their history.

"I never thought it would happen. It's a dream for me," he said.

There are still unanswered questions, however.

"Why was he separated from his backpack in the first place?" asked historian O'Keefe.

A soldier is responsible for every item they carry and there would have been an inquiry into what happened.