Montreal's Amherst Street has been renamed Atateken Street, which denotes the idea of equality among people in Kanien’kéha, the Mohawk language.

The name was, among other things, inspired by how it links La Fontaine Park and the St. Lawrence River

Montreal's Amherst Street has been renamed Atateken Street, which denotes the idea of equality among people in Kanien'kéha, the Mohawk language.

The announcement, made this morning by Mayor Valérie Plante, comes two years after her predecessor Denis Coderre promised to rename the street.

The street was for years named after Jeffery Amherst, a British general who became a highly controversial figure for his relations with Indigenous people.

Amherst advocated the use of biological warfare, through smallpox blankets, to kill Indigenous peoples.

Last year, the city announced it would be choosing the name of an Indigenous person, in the spirit of reconciliation. The new name was chosen by a committee composed of Indigenous people.

"Atateken translates to brotherhood, group of people or nations sharing commonalities like values and beliefs, which could loosely be translated as our relations," said Hilda Nicolas, director of the Kanesatake Language and Cultural Centre.

"While we cannot erase history, nor should we want to, the removal of his name from this street shows the willingness of Montreal to work together not only in reconciliation, but in common values and beliefs."

How do you pronounce the new street name? 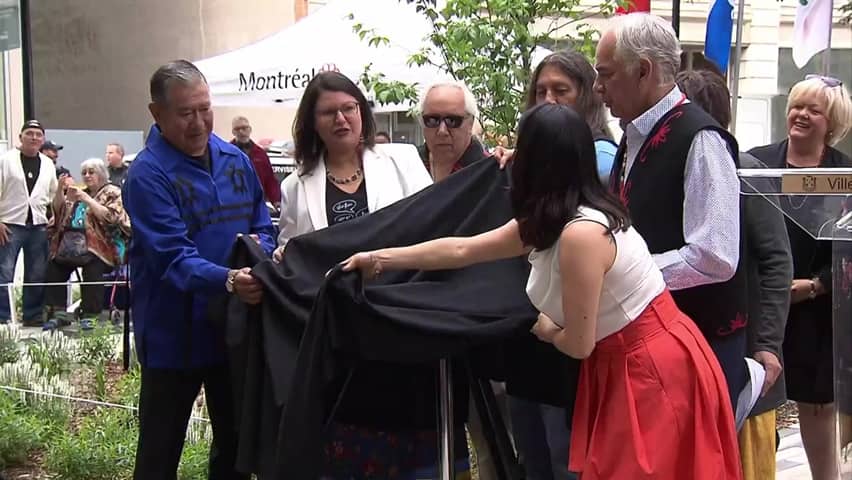 How do you pronounce Atateken?

"We're here today to acknowledge the sad part of it, but also to celebrate the renaming of the street," Norton said.

"The recognition of unceded territory. Doesn't mean we're going to come in here and kick you out. It means you finally recognize that where you're standing isn't necessarily all yours, that it came at a price," Simon said.

According to a news release by the city, the name also signifies peace and was inspired by how it links La Fontaine Park and the St. Lawrence River.

The new street signs will be up in autumn, after the name change is approved by council in August. The old Amherst signs will stay up for some time afterward, to avoid confusion.

Verity Stevenson is a reporter with CBC in Montreal. She has previously worked for the Globe and Mail and the Toronto Star in Toronto, and the Telegraph-Journal in Saint John.

With files from Kate McKenna